Why World Cup star Lozano would be perfect Klopp signing

Pressing has come to define football in the 2010s and few managers have embodied that switch more than Jurgen Klopp.

The Liverpool coach is embarrassed when he’s reminded of his infamous “heavy metal football” line, but his famed gegenpress, namely winning the ball back quickly in high and vulnerable areas, combined with relentless, fast-paced attacking, has been mirrored across the world.

Except, that is, in international football where the pace isn’t so frenetic and the build-up more patient and considered. Defensive football, as Euro 2016 showed, reigned supreme.

While few teams at the World Cup have played with such thrilling intensity as a Liverpool or Napoli, two of the sides who have really stood out in the group stages in Russia are the ones who have mimicked developments in domestic football: notably, England and Mexico.

The standard-bearer of Mexico’s high-voltage velocity football is Hirving Lozano. The PSV forward has a goal and an assist in two games and has impressed, not only with just his attacking play, but the way he has pressed the opposition and been El Tri’s first point of defence.

It would come as little surprise therefore that, having missed out on Lyon forward Nabil Fekir, that Liverpool would turn their attentions to Lozano, who is arguably the clearest representation of Klopp-esque football at this World Cup.

Our friends at Football Whispers analyse the merits of Lozano and how the Liverpool transfer target would fit in at Anfield.

OL captain Fekir appeared to be in the bag and although – for whatever reason – Liverpool failed to complete the deal their interest confirmed Klopp wants to sign another forward player.

Although Lozano isn’t a like-for-like alternative to Fekir, he does appear a more natural fit for the Reds whose front three of Mohamed Salah, Roberto Firmino and Sadio Mane signified so much of what they were about in 2017/18.

Lozano bagged 17 goals in 29 games for PSV and ranked eighth in the Eredivisie among attackers for total scoring attempts per 90 (3.83), proving a potent attacking weapon for the Dutch champions.

Confident Nabil Fekir will move to Liverpool? Back it at 21/20 with RedsBet

He also shares attributes similar attributes to Salah and Mane in that he’s traditionally stationed as a wide forward, on the right and left, and cuts inside when approaching the penalty area. There is everything to say, like Salah, Klopp can take the raw materials and turn him into an even more efficient offensive player.

Although he has just one season of European football behind him, Lozano had accumulated 149 appearances for Pachuca in Mexico and has 29 international caps. He’s far from inexperienced.

Lozano turns 23 next month and, injuries permitting, still appears to be a long way off his potential ceiling as for all the positives to his game there are flaws which can be ironed out with the right coaching refinement.

Just like Salah (signed at 25), Mane (24) and Firmino (23), Liverpool could bag a pacy young forward on the verge of becoming a very special player indeed. And all for just £30million, his reported release clause at PSV. 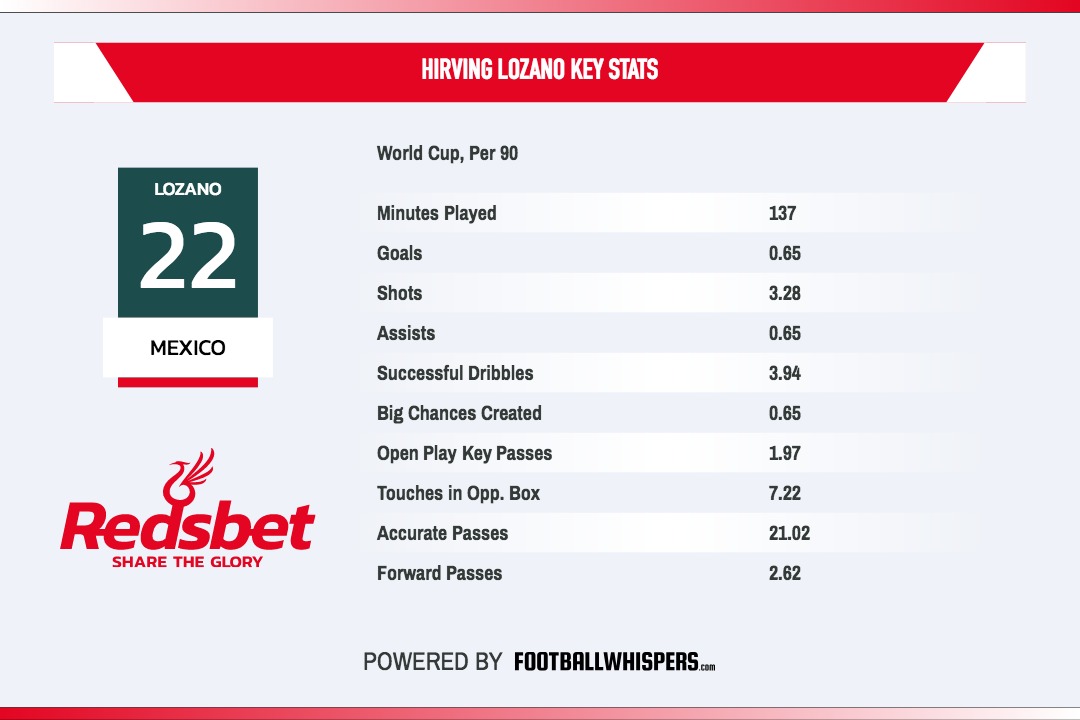 What are Lozano’s strengths?

At the risk of stating the obvious, he’s a classic wide forward who plays on the front foot and is very quick. Lozano’s pace becomes apparent when he stretches his legs beyond an initial 10-20 yard sprint, attacking the space between midfield and defence.

He has aggression in his dribbling in that he always looks to shape defenders up 1v1 and push the ball past them, usually onto his shooting foot. However, his successful take-ons per 90 in the Eredivisie weren’t particularly impressive as he averaged 2.34 (26th for an attacker).

That, coupled with his improving shot-making, makes for a devastating combination as Lozano likes to shoot from 20 yards as much as he does ten yards and his powerful attempts from range became a signature move last season.

He averaged a goal every 5.88 scoring attempts, converting 17 per cent of all chances which isn’t elite-level but is an encouraging figure for a forward learning his trade. He is very strong on his right foot, picking out the space in the far corner.

His energy isn’t just reserved for attacking, either, as he is a relentless presser of the opposition and even scored against AZ Alkmaar last season first by closing down the defender, then the goalkeeper, eventually tackling the ball into the net.

Finally, there’s his set-pieces. Lozano was on free-kicks and corners for much of last season and finished 1.11 set-play key passes per 90 (sixth in the Eredivisie) and a figure which would have placed him second in the Premier League last season (behind only Burnley’s Robbie Brady on 1.17). 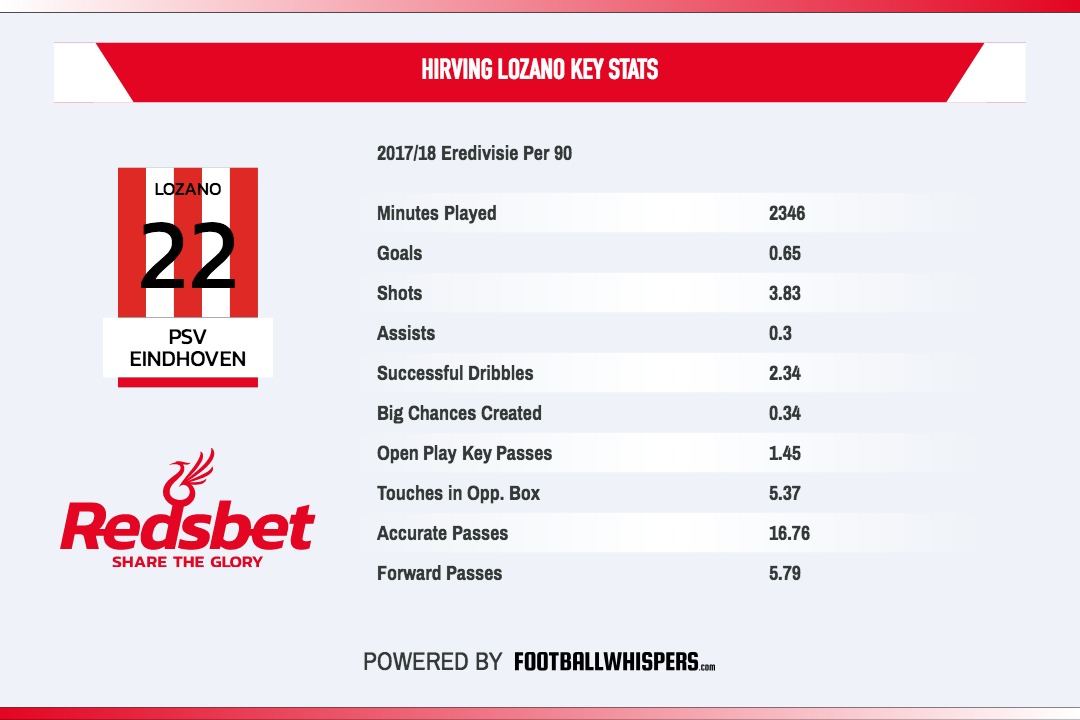 What are Lozano’s weaknesses?

Sprinting full-pelt with the ball at his feet, dodging and weaving into defenders, isn’t always conducive to setting up the best shooting opportunities and Lozano’s bursts often end in disappointment.

His desire to put his entire force behind every shot looks fantastic when it pays off but frustrating the rest of the time. He needs to show greater finesse around the penalty area.

But that is an overall criticism of his game and even his character on the field. Just like another hugely talented forward who once made the journey from the Eredivisie to Merseyside in Luis Suarez, Lozano’s passion doesn’t always manifest itself positively.

Twice he was sent off for PSV following provocation by defenders, while there were other off-the-ball incidents where he was fortunate to escape punishment. His high-octane style has a propensity to boil over and as his profile rises, so will the desire of the opposition to wind him up.

Reckon Lozano will join the Reds? Back him to move to Merseyside at 17/1 with RedsBet

His pass for Javier Hernandez’s goal against South Korea was a sign of progress as Lozano broke forward and was well within his rights to shoot but instead played the ball inside to Chicharito, who had the far better angle, to score.

On occasion he’s been guilty of choosing the wrong option and not being more generous with the ball, especially with his team-mates in better shooting positions.

He also is very right-footed, nearly always shifting the ball onto his favoured foot. His close control and balance affords him greater ability to manoeuvre but against Premier League defences, he’ll need to develop more variation in his finishing.

But if the signing of Salah has proven anything it’s that rough diamonds can come up gleaming – and Lozano could be the next.