The Reds are linked with a move to the German striker, and it would be worth the money

Liverpool don’t often do business in January, but when they do it’s usually good business.

A look back through the years shows that it’s either players for the youth teams or major first-team signings who go onto be a big part of the team for several years.

The latest big name that the Reds have been linked with is Timo Werner, RB Leipzig’s 22-year-old striker.

Chatter on a move for Werner has been around for a while, but has been strengthened by Dominic Solanke’s sale to Bournemouth and rumours of a permanent transfer for Divock Origi. The £34m that this could bring in would be more or less enough to bring in Werner on their own.

What would Werner bring?

Werner brings goals. It’s kind of his thing. This season has been Roberto Firmino’s only one at Liverpool where his goals (rather than assists) have made up more than 80 per cent of his total goal contribution. For two of Werner’s three seasons at RB Leipzig, this figure has been at just under 85 per cent.

This difference in styles is starkly shown through their Football Whispers’ persona radars, which show how people play stylistically. Firmino (yellow) looks like a very rounded forward; Werner’s game (blue) is much more focussed on shooting. 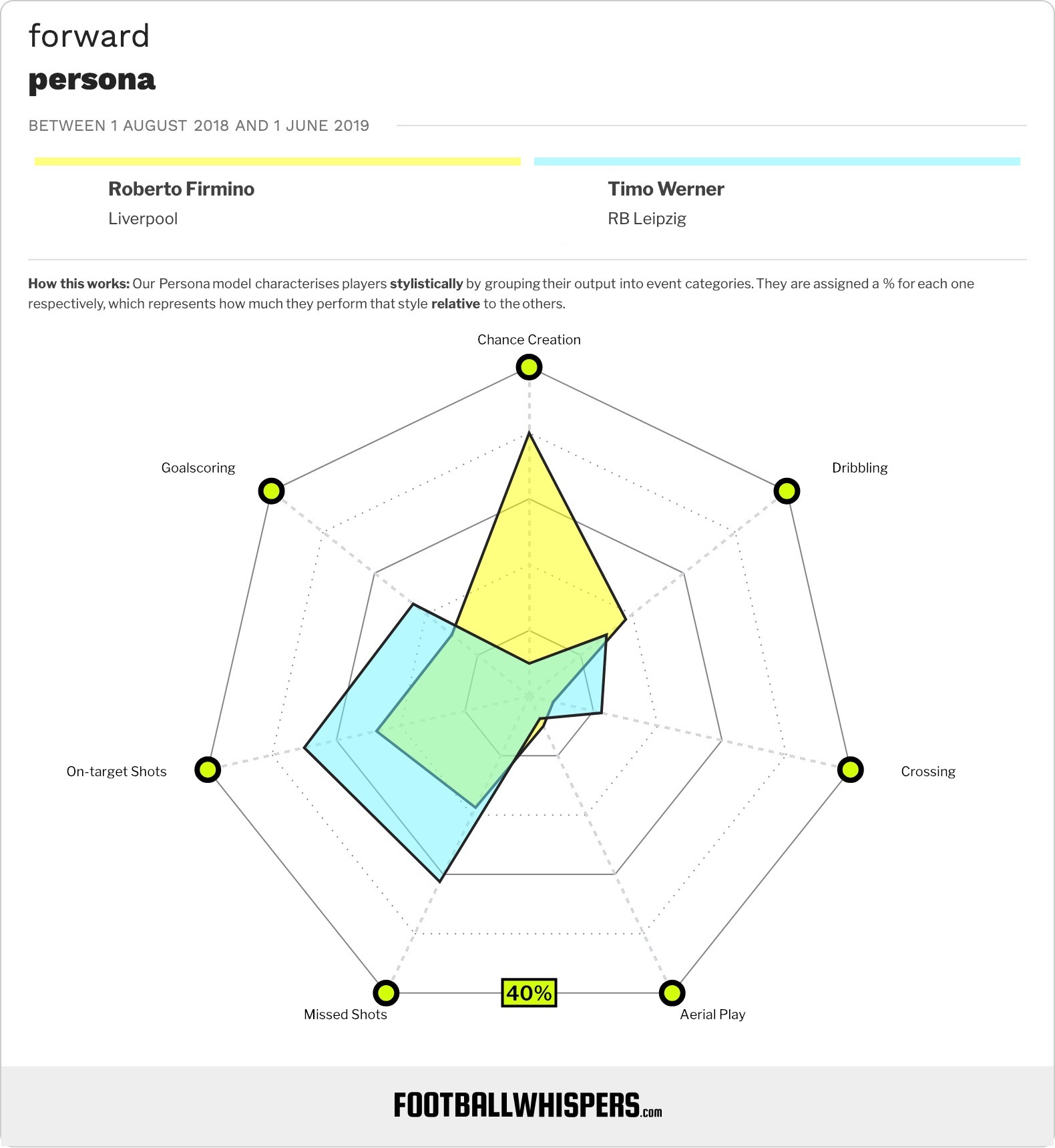 This isn’t to say that Firmino doesn’t offer enough to Liverpool at the moment — his rounded game is, and has been, a very valuable thing to have in the Reds’ arsenal.

However, Jurgen Klopp’s side are transitioning from a team of challengers to the top few teams to league leaders. Counterpressing (and Firmino’s defensive workrate) is still a valuable tool, but it’s not needed as much, because the rest of the team have improved and opponents now respond to Liverpool in different ways.

It’s not as if Werner isn’t a well-rounded player — his seven assists in 2017/18 attests to that — but he’s more of a traditional striker than the Brazilian. The addition of Werner would allow Mohamed Salah to take up his usual position on the right flank when Klopp plays a 4-2-3-1, rather than being stationed as the main striker, ahead of Firmino.

Werner worth the cost

Werner is that rare thing: a young but proven striker. He’s also affordable.

The 22-year-old German has 18 months on his contract but doesn’t seem keen on signing an extension, and Leipzig have threatened that he’ll be sold if he doesn’t.

“A club like us cannot afford to go into the final year of Timo Werner’s contract,” Leipzig CEO Oliver Mintzlaff has said, “as we have discussed with him and his advisor, as all parties have the same understanding.”

Rumoured costs have been around £35-40million, which would be affordable anyway, but particularly so given the outgoings that Solanke and Origi could bring.

Werner will also be able to slot into Liverpool’s system easier than other forwards might be able to, thanks to his time at Leipzig and the shared tactical threads that they have with Jurgen Klopp’s footballing thinking.

Both teams employ thoroughly planned pressing systems, both teams have been known to play direct football while also being capable in more possession-based play. Werner would also be joining up with a former teammate in Naby Keita.

Keita is actually a good example for how the striker may be able to adjust and fit into Liverpool’s system. Some have wondered why Keita and Fabinho haven’t been seen more this season, and Klopp has spoken about it before, explaining that it takes time to adjust to the system, particularly in Liverpool’s midfield.

Werner might not start straight away if he joined, but he could certainly be starting by the end of the season. And, with Liverpool still battling on several fronts, the extra elite-quality depth could prove significant in the fight with Manchester City and Tottenham for the Premier League title.