Why Salah will soon be back amongst the goals

By this time last season, Salah had scored 11 goals in all competitions. This season he’s scored seven goals, and has played an extra 121 minutes as well.

It’s inevitable that this would have an effect on Liverpool’s season, and nowhere was this clearer than on Tuesday night. In the Champions League, Tottenham Hotspur’s talismanic forward Harry Kane rescued his team. In Belgrade, Salah took eight shots without finding the net.

However, hope is not lost. Our friends at Football Whispers are here to tell us why the Egyptian will soon be among the goals again.

Salah’s 2017/18 was almost the Leicester City of seasons for an individual striker. Not that he was expected to be a dud – although some in the media clearly hadn’t seen what a player he’d been at Roma and were doubting him – but he was so on fire he was unstoppable.

Just as it became almost an inevitability that the Foxes would score on the break and win the match during the 2015/16 season, it became normal to see Merseyside’s favourite Egyptian put fear into the eyes of defenders and the ball into the back of the net.

Another type of inevitability

As magnificent as he was, he was on the hottest of hot streaks, and it was similarly inevitable that, at some point, this would end. It makes for a good narrative that it’s come after his injury in the Champions League final, but it could have come at any point.

But, just as the hot streak turning very cold could happen at any point, the cold could turn to hot again just as quickly.

Salah’s underlying statistics, which give a better measure of his performances than his goal tally, show that he’s still putting in the work this season.

By looking at the amount of shots he is getting, as well as the quality of these shots using expected goals (which bases shot quality on how thousands of previous shots turned out) we can see that Salah stacks up very similar to 2017/18. 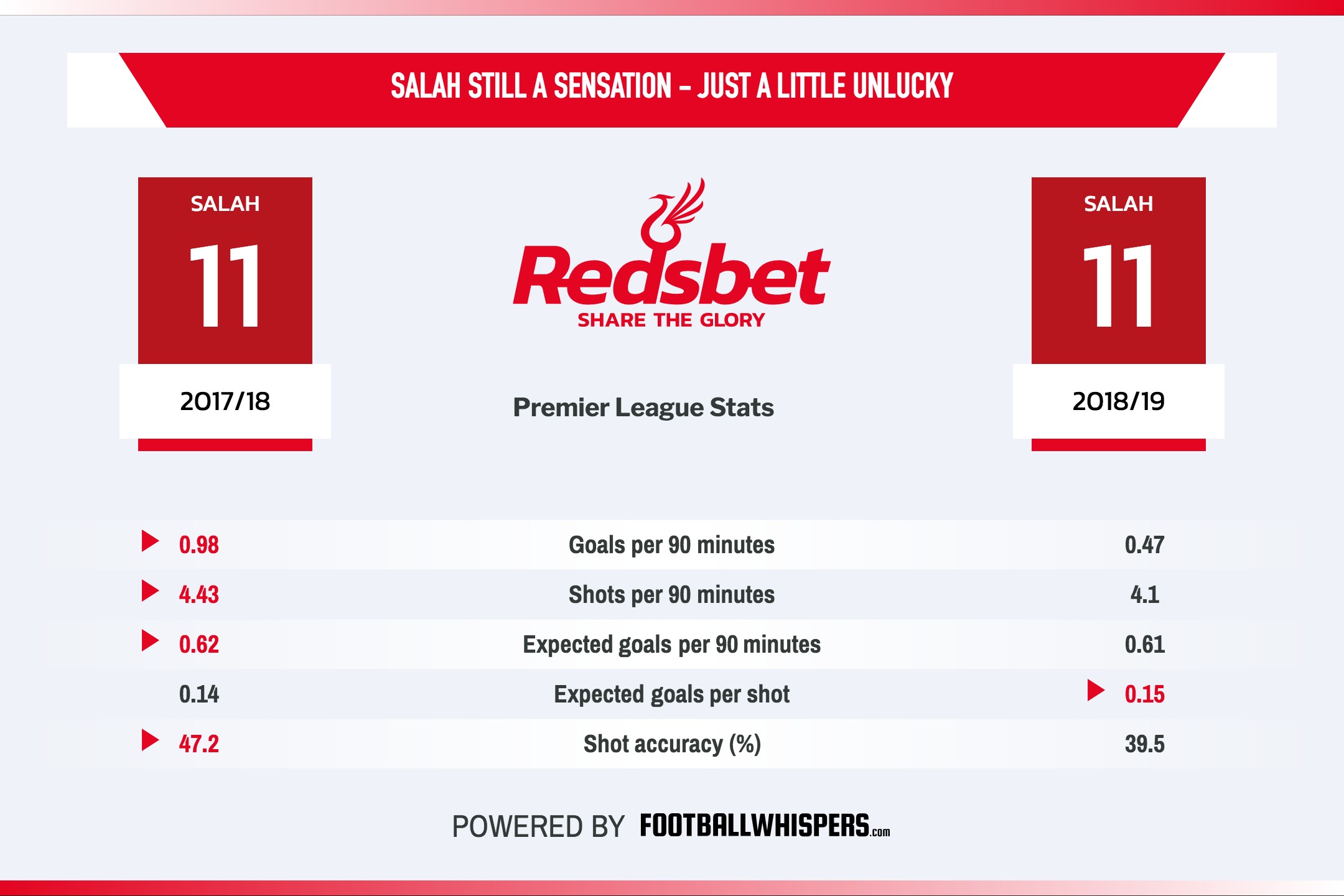 The only thing, other than goals, that’s down this season are his rate of getting shots on target, although his rate of nearly 40 per cent in the league this season is still very healthy.

His shot conversion rate of 22.2 per cent last season was extraordinarily high, the kind of level that only players like Lionel Messi are able to get close to on a regular basis. This season it’s gone the other way, now just under nine per cent.

This’ll bounce back, it’s just a matter of time and carrying on doing the things that he’s doing now.

Jurgen Klopp understands this. “It’s completely normal situation for an offensive player,” he said in September about Salah’s form.

“He’s still a threat. He’s in good shape and then finishing is something we can never take for granted. The most important thing is that he’s in very good physical shape and that helps.”

Spreading through the team

It’s not just Salah who can’t quite get into a run of things this season though, it’s starting to affect the entire team.

“For us it was not clicking, it was not easy,” Klopp said after the Red Star game. “We never came back into situations. I saw a few games like this already and it is really difficult to find your mojo back.”

Salah’s cold run is probably more noticeable – and maybe even more important – because the rest of the team are struggling to make up for the goals that he’s no longer getting.

There’s not much that the Egyptian can do to control whether he can get back into the groove – if there was, then every player would be doing it – but, nearly three full months into the season, it’s getting more important that things get back to normal.

The good news is that they will, but it’s just a matter of when. And with a run of middling opponents to come in the league over the next month, that ‘when’ could be very soon.