The search for a new goalkeeper is still very much ongoing at Anfield. It was hoped that Loris Karius would be a strong and consistent upgrade on Simon Mignolet but that, clearly, hasn’t worked out.

It’s a sign of how good Liverpool’s transfer dealings have been in the past few years that goalkeeper is one of the few positions that really needs some work.

The forward line, the midfield, and the defence, for the most part, all look strong with a good amount of depth in several areas. Goalkeeper is the last position on the list.

Neither Mignolet nor Karius have consistently convinced between the sticks for the Reds and while both would be a decent back-up, Jurgen Klopp will surely want a more reliable keeper to wear the Liverpool gloves.

Our friends at Football Whispers take us through three goalkeeping options Klopp should be looking at.

Cillessen seems to be the most likely goalkeeper to join the club, with the Reds having already made an offer that the Barcelona man is ‘analysing’.

The Dutchman would bring superb on-ball skills, which might even rival Manchester City’s Ederson, and would mean that opposing defences would never be able to switch off. How could they, when Liverpool would be able to find Mohamed Salah or Sadio Mane with a pinpoint pass at any moment?

However, it’s that – and not his work with his hands – that is Cillessen’s strong point. He has good reactions, but can spill shots back into danger. Would he be enough of an upgrade over Mignolet or Karius to be worth what could be a €30million deal?

Roma’s Alisson is the stopper that Europe’s top teams all seem to be chasing. As well as Liverpool’s interest, the 25-year-old is also a Chelsea and Real Madrid transfer target, so the fight for his signature could be fierce.

It’s been reported that Alisson would prefer to live in London for family reasons, and he’d likely set a buying club back a cool £80million. 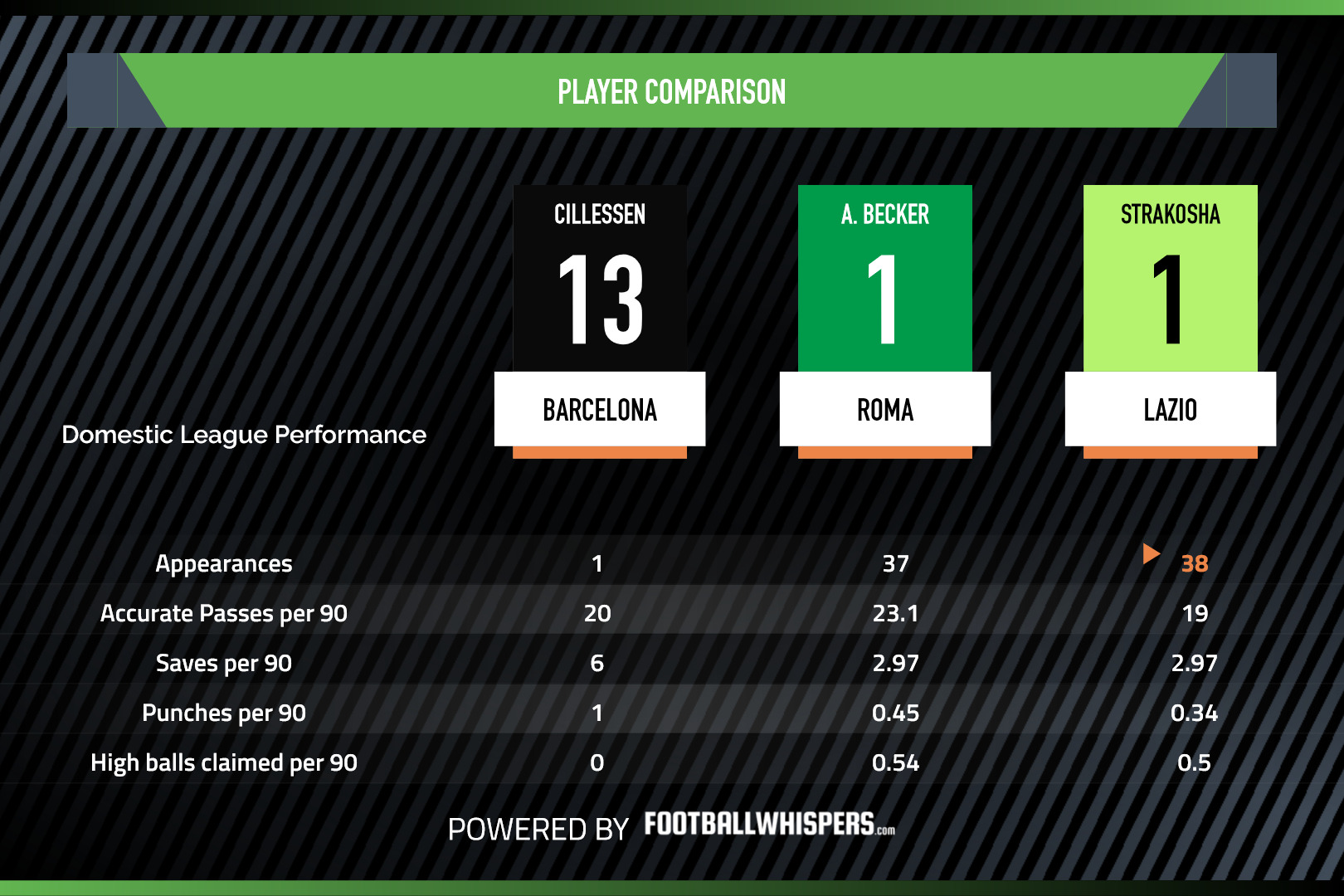 The Brazilian is also superb with the ball at his feet, perhaps not with the same range of passing as Cillessen, but with a coolness of head and intelligence that make up for it. His footwork off the ball is good too, keeping him ready to dive in either direction to make a save.

His value is reflected in his price tag and the interest from other big clubs, though, and Liverpool would have to really roll out the red carpet to get him to Anfield.

At only 23, playing for Lazio and Albania, Strakosha isn’t exactly a household name.

His fee would be similar to that of Cillessen, according to reports, but Liverpool would be getting a keeper six years younger than the Dutchman and with an awful lot of potential.

The Albanian has fantastic reflexes and rarely seems to push the ball back into danger the way that Cillessen does, although the youngster won’t bring the quarter-back style passing that the Barcelona man has.

But do the Reds need that? With Virgil van Dijk at the back, Klopp has a centre-back capable of spraying the ball around anyway, and Liverpool aren’t likely to play the ball around the back as much as Barcelona do. Buying a goalkeeper who can pass as well as a midfielder probably isn’t what Klopp is looking for.

Which to go for?

Of the three, who should Liverpool go for, or should they stick with what they have? Clearly, upgrading the position is vital, and money shouldn’t be spared to do it. Pulling out all the stops to sign Alisson seems like the best course of action.

If that’s not possible, the decision gets more difficult. The difference between Cillessen, Strakosha, and Klopp’s current keepers isn’t huge. Is it worth spending £30million on another stopper who might not properly solve the problem? Probably not, which is why reports are suggesting Danny Ward could be in the running for the No. 1 spot.

As far as goalkeeper signings go, then, it could be Alisson or bust.