Do the Reds need to up the energy levels again?

For a period of Tuesday evening, it looked as though Liverpool’s sorrow would at least be softened by Tottenham Hotspur going down to an embarrassing loss in the Champions League as well. But then Harry Kane hit his stride, and got two goals in the final fifteen minutes of the game.

The 2-0 loss in Belgrade to Red Star takes Jurgen Klopp’s side out of the driving seat of Group C, and our friends at Football Whispers are here to work out what happened and what it means for the rest of Liverpool’s season.

It would be surprising if it had happened before in Champions League history, but the entirety of Group C are separated by just two points after four games.

With the Reds’ defeat and the draw between Napoli and Paris Saint-Germain in Naples, Liverpool and the Neapolitans lead the group on six points, PSG have five, with Red Star on four (although a -7 goal difference).

Even considering the changes that Klopp had made to his starting line-up, Liverpool didn’t look like they were on-form during the first half hour of the match.

In that first thirty minutes, they were neck-and-neck with Red Star, rather than clearly dominating them. The Reds led on completed passes in the final third 18-11, but trailed on shots 8-6 – as well as goals, 2-0.

It was only after that, when Red Star had their lead and were content to sit back and defend their lead, that Liverpool became a dominant force in the match.

However, this was only a dominance in possession, Klopp’s team struggling to translate it into chances until the very end of the game. 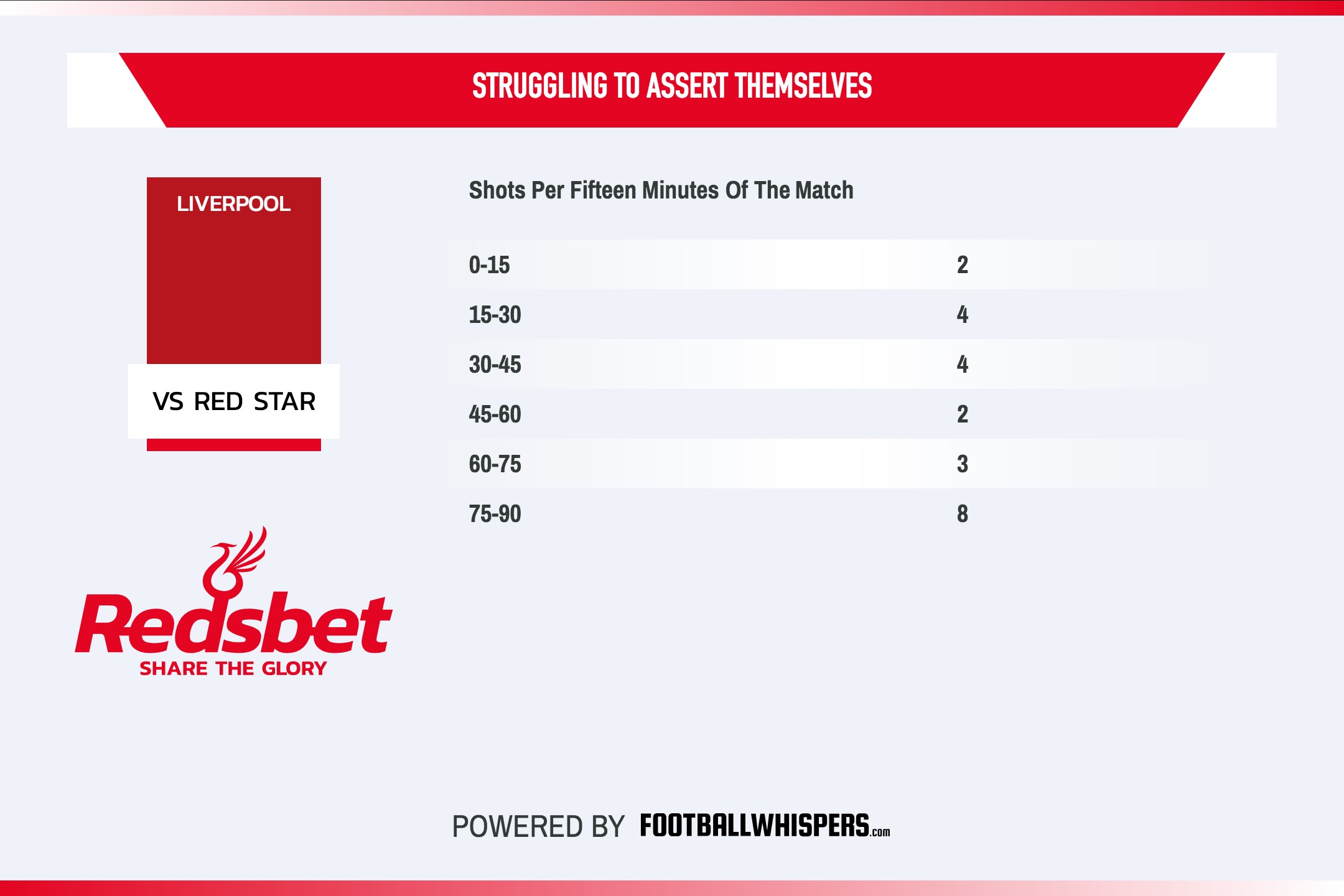 In some ways Liverpool were unfortunate – they did create more than enough chances during the game to score at least one goal. If they’d had the kind of shooting boots that Milan Pavkov had for his second goal, then they could have easily outscored their Serbian opponents.

But the picture is skewed by the fact that Red Star switched off their attack when they went ahead. The truth was that Liverpool weren’t convincing enough when scores were level, and didn’t deserve to take much from the match.

The result puts Klopp in a tricky position, and not just because it was an embarrassing performance and defeat.

Any advantage that his team could have had in the group is now gone. There had been a chance that he might have been able to take the final two games of the group stage a little easier – if Liverpool had been the side to win 2-0 on Tuesday, they could have won the group with two draws against PSG and Napoli.

Liverpool to win the Champions League, 12.00*

The fact that they can’t now do that means that any rotation becomes a risk, which also means that the title challenge in the Premier League may suffer as a result. And the comparison with how Tottenham turned their match around becomes more important.

It was Harry Kane who fired Spurs to victory at Wembley against PSV. If Liverpool have an equivalent of Kane, in terms of firepower and emblematic status, it’s Mohamed Salah and he failed to score in Belgrade.

It wasn’t for the want of trying, though. In the ninety minutes, he had eight shots, six of which were from inside the box and three of which were on target. The player with the next-most shots in the game was Daniel Sturridge, with three, and none of these tested the goalkeeper.

Salah hasn’t performed any worse this season than last, in any meaningful way, but he’s still struggled to find the net. 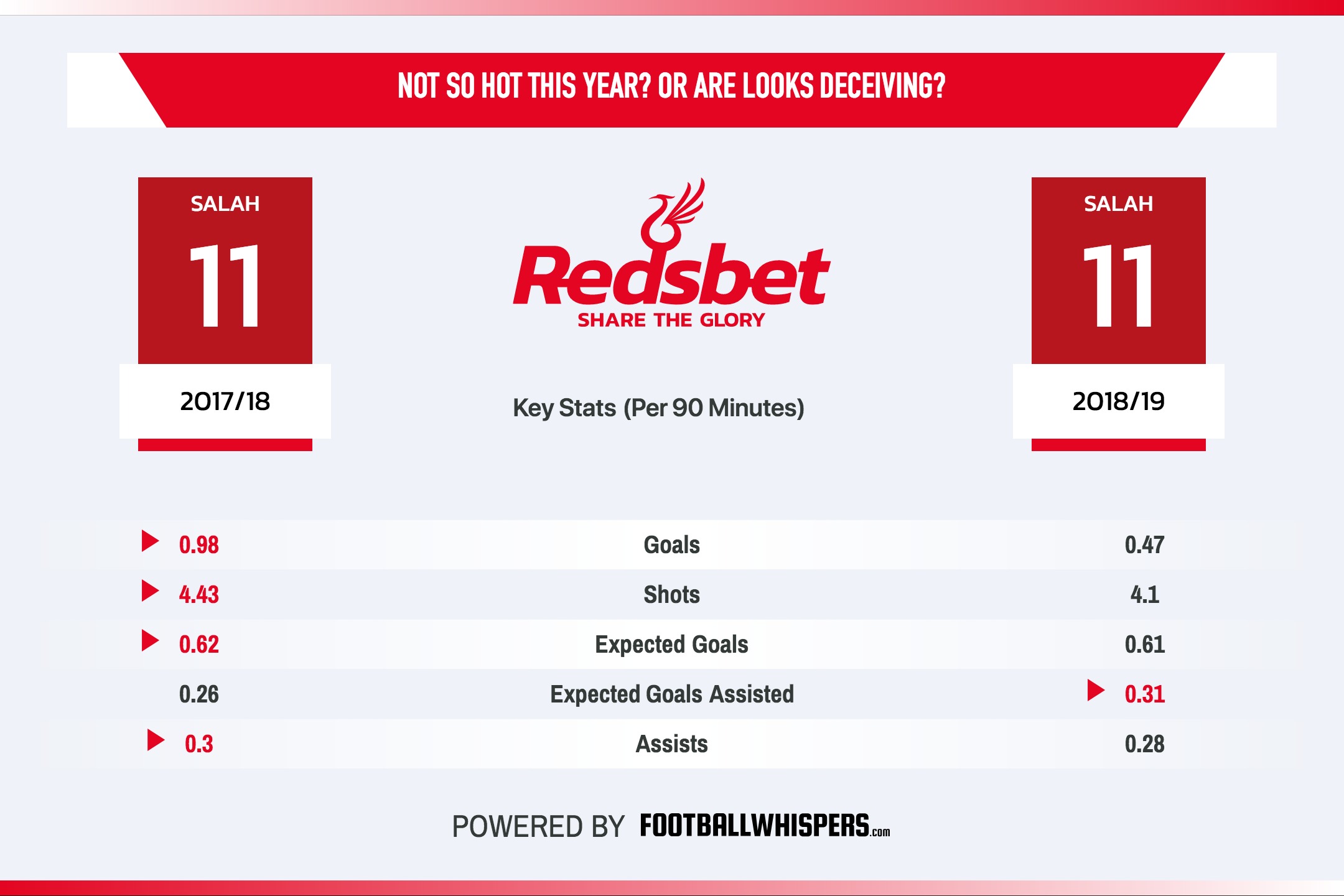 The Egyptian was on fire last season and has gone the other way this campaign, through no apparent fault of his own. If he was, Liverpool would probably have won on Tuesday, but the fact that he isn’t raises questions about the rest of Jurgen Klopp’s team.

Where the German once said that “no playmaker in the world can be as good as a good counter-pressing situation,” Liverpool’s pressing doesn’t seem to be doing this as much as it used to.

A calmer approach to pressing may have been taken with the aim of being fresher in the latter stages of the season, but there’s no use being fresh if you’re not competing in the big competitions.

It’s a difficult balance to strike, but maybe Liverpool need to up the energy again.