What is happening with Liverpool Ladies?

While there’s been all of the excitement of transfers and the Champions League happening for the male side of Liverpool, it’s been a whole different story for the Ladies.

Almost literally the complete opposite has happened for Liverpool Ladies and all I can say about it is: what the hell is going on over there?

I won’t pretend to be an expert in women’s football. I follow the Liverpool Ladies and cover them for Liverpool Offside but only as much as what is readily available online. There are no ins with that side of the club for me, as their matches are hardly televised. I’m lucky to catch them for free on Facebook Live if I can.

Liverpool Ladies to win the Women’s Super League next season is 6/1.

It would be hard to read the news regarding the team and not worry, though. Their manager, Scott Rogers, was sacked (understandably) after the team finished sixth this year. They’ve lost nearly all their marquee names due to sales or letting contracts expire, including Scouser herself Alex Greenwood.

They’ve been ensured a spot in the FA WSL for one more year. They failed to sign loanee and top goal scorer Bethany England to a permanent contract. Star midfielder Caroline Weir left for Manchester City. Veteran Casey Stoney left to join Phil Neville’s backroom with the national team, only to be announced mere months later as the manager of the brand new Manchester United Women’s team.

Last Thursday they announced that Sophie Ingle, voted Player of the Year for 2018, would be joining Chelsea. Hardly a day later the announcement came that captain Gemma Bonner would also be leaving the club, joining Caroline Weir at Manchester City. Ten players that have left the team in total this season. Ten starters, most of them players that had helped bring the club championship titles. Ten. 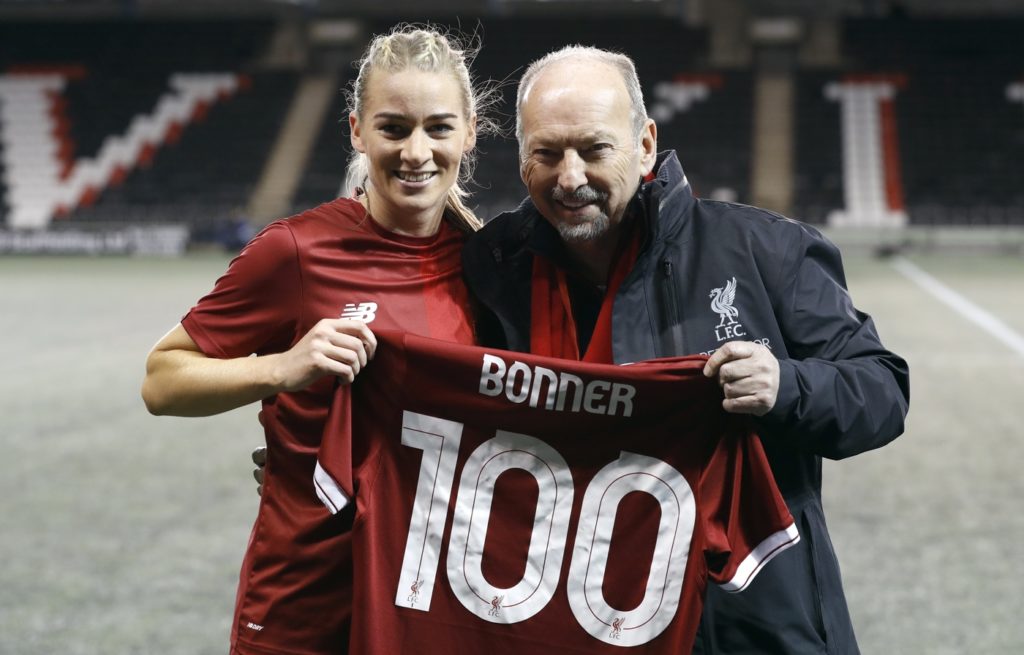 Gemma Bonner is presented with a shirt by Liverpool chief executive Peter Moores, as she celebrates playing 100 games for Liverpool

In a time when Liverpool should be spearheading the growing interest in women’s football, they’re falling embarrassingly behind in every single way.

I don’t know all the particulars of how this club is run. I know they started as a whole different club, Newton FC, before linking up with Liverpool in ’94. They are affiliated, partnered with, but still very much on their own. They weren’t included in a recent study regarding the gender wage gap within Liverpool FC, as they are considered “a separate entity.” There’s probably a legal reason for that that I’m not privy to.

Why, then, does it seem that they are being entirely neglected? We talk so much about how legendary Liverpool are as a club – shouldn’t that support extend to the women’s team as well?

No excuse is good enough to me. Don’t tell me it’s because no one cares because I sat in Prenton Park to watch the Merseyside Derby in April and heard songs sung for 90 minutes straight.

Don’t tell me it’s because the women’s game is not nearly as exciting or well played, that men are just better at it. I love the men’s team, I do, but no one gets up after a tackle like these women.

It seems to me there is no good excuse. Liverpool were just named the 8th most valuable club in the world. 5th in the Premier League. How is so little of that money being invested in the Ladies side?

How is a club that is so well loved by it’s supporters allowed to fall into this kind of disarray?

Besides the glaringly obvious and unsavory answer, I don’t know.  I wish I knew.

I don’t know how to convince Peter Moore and the rest of Liverpool FC that the Ladies are just as worth the investment as the men. I don’t know how else to convince you to watch them, to support them, because they’ve fallen so short in four years. There is sitting on your laurels and there is this.

I expect more out of my club, and I’ll keep banging this drum.