Roberto Firmino has been something of an enigma ever since he arrived on Merseyside. The Brazilian starred for Hoffenheim as an attacking midfielder, involving himself in an impressive 27 goals during the 2013/14 campaign. He followed that up with seven goals and ten assists before bagging a £29million move to Anfield.

He’s now back playing as an attacking midfielder, but reviews of his performances as of late aren’t favourable. There’s a feeling that history is repeating itself with the Brazilian once again being misunderstood.

Our friends at Football Whispers are here to help understand him.

Cast your minds back to 2015. Brendan Rodgers gave Firmino his debut as a right-winger away at the Emirates in a 0-0 draw before a back injury picked up against West Ham ruled him out for a number of weeks. When he returned to the fold, Jurgen Klopp had replaced the now-Celtic boss and the one-time defensive midfielder’s transformation had begun.

But it wasn’t that straightforward for Firmino. Tasked with leading the line as a false-nine, fans quickly began to value his work-rate and understood that it was a key part of this new-look side. It was there for all to see as Klopp’s Liverpool started to come into focus. The No.11 played a pivotal role in emphatic wins over Chelsea and Manchester City.

He found the net in the latter match as well as assisting his compatriot Philippe Coutinho as the Reds ran riot at the Etihad. But such matches were few and far between. Firmino would be heavily involved but he’d struggle to trouble the opposition’s goalkeeper on a regular basis.

He finished his first campaign in England with ten goals and seven assists. His second season was slightly better in terms of goal involvement as the maverick Brazilian finished with a total of 18 in the Premier League.

On one hand, he was Klopp’s perfect frontman. He epitomised everything the former BVB boss wanted his Liverpool side to be. But on the other hand, there was a feeling that he wasn’t prolific enough to be a No.9. He was more than capable of being a supporting cast member but a leading man he wasn’t. And that was the internal tussle many Liverpool fans had to battle with throughout the summer of 2017.

Klopp, however, didn’t bat an eyelid. He backed his man, as he always does. Mohamed Salah’s arrival resulted in Firmino taking the No.9 jersey. A number made famous by the prolific forwards from throughout the club’s history. 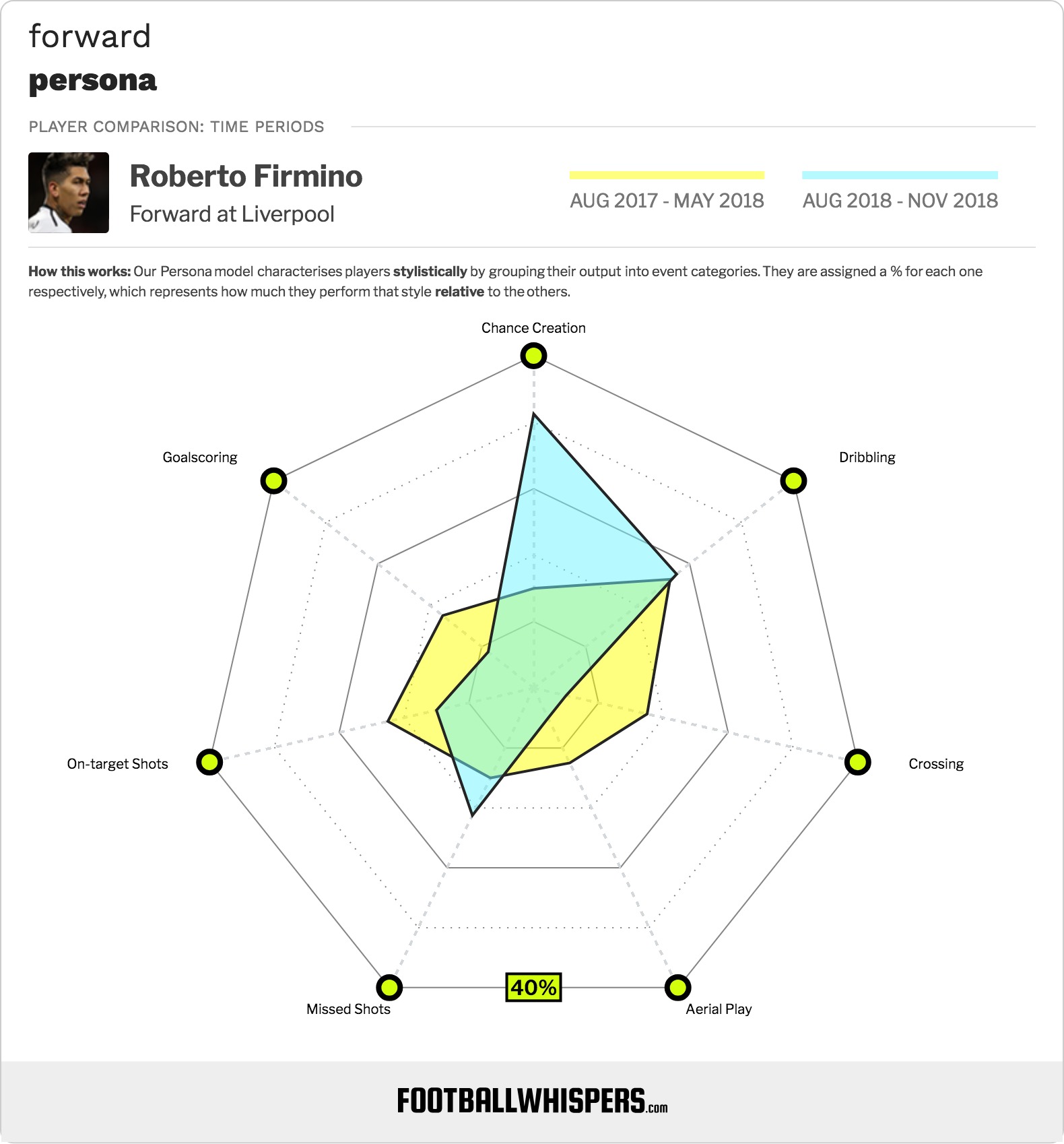 As the 2017/18 season progressed, Klopp’s decision to put his faith in his No.9 was more than justified. The Brazilian started the season off in spectacular form alongside Coutinho, Salah and Sadio Mane. The former left in January but Firmino’s form didn’t just continue, it seemed to improve.

He was everything he was in seasons gone by but he added a clinical edge to his game that had previously been lacking. He wasn’t a false-nine but a fully fledged one. Not only that, but he was also one of the most consistent and reliable forwards across Europe. It appeared as though Klopp had solved the Firmino-shaped Rubix cube.

The Brazil international was involved in over 40 goals across all competitions as the Reds finished in the top four, again, and made it all the way to the Champions League final. His return of ten goals and seven assists in Europe’s premier competition made him part of the elite.

Liverpool went into the 2018 summer transfer window knowing they had a forward line considered one of the best in world football. The additions of Alisson, Fabinho and Naby Keita meant Klopp had a squad capable of competing on all fronts for the first time ever. All he had to do was integrate his new signings into the team. However, that was easier said than done.

Check out all of our Liverpool specials here

The German tactician has tinkered with not only his starting XI this season but the system they’re deployed in. He’s dabbled with a diamond formation, used the tried and tested 4-3-3 shape and even rekindled his love affair with the 4-2-3-1 system.

And while many believe formations are defunct these days due to players being so interchangeable, tweaks to the system do impact the positions players take up. So while on paper all three shapes don’t look too dissimilar, Firmino’s role in each of them is drastically different from one to the next.

And, as expected, it has had an impact on Firmino’s productivity. At this stage last season he’d been involved in 11 goals in all competitions. This time around he has four goals and two assists. The opposition has been different, perhaps even harder this time around, and he’s appeared in fewer matches but the bottom line is he’s been involved in a goal every 193 minutes this term up from the 118 minutes he was managing at this stage 12 months ago.

But should he be judged solely on these stats when it’s clear to anybody watching that he’s playing deeper this season? 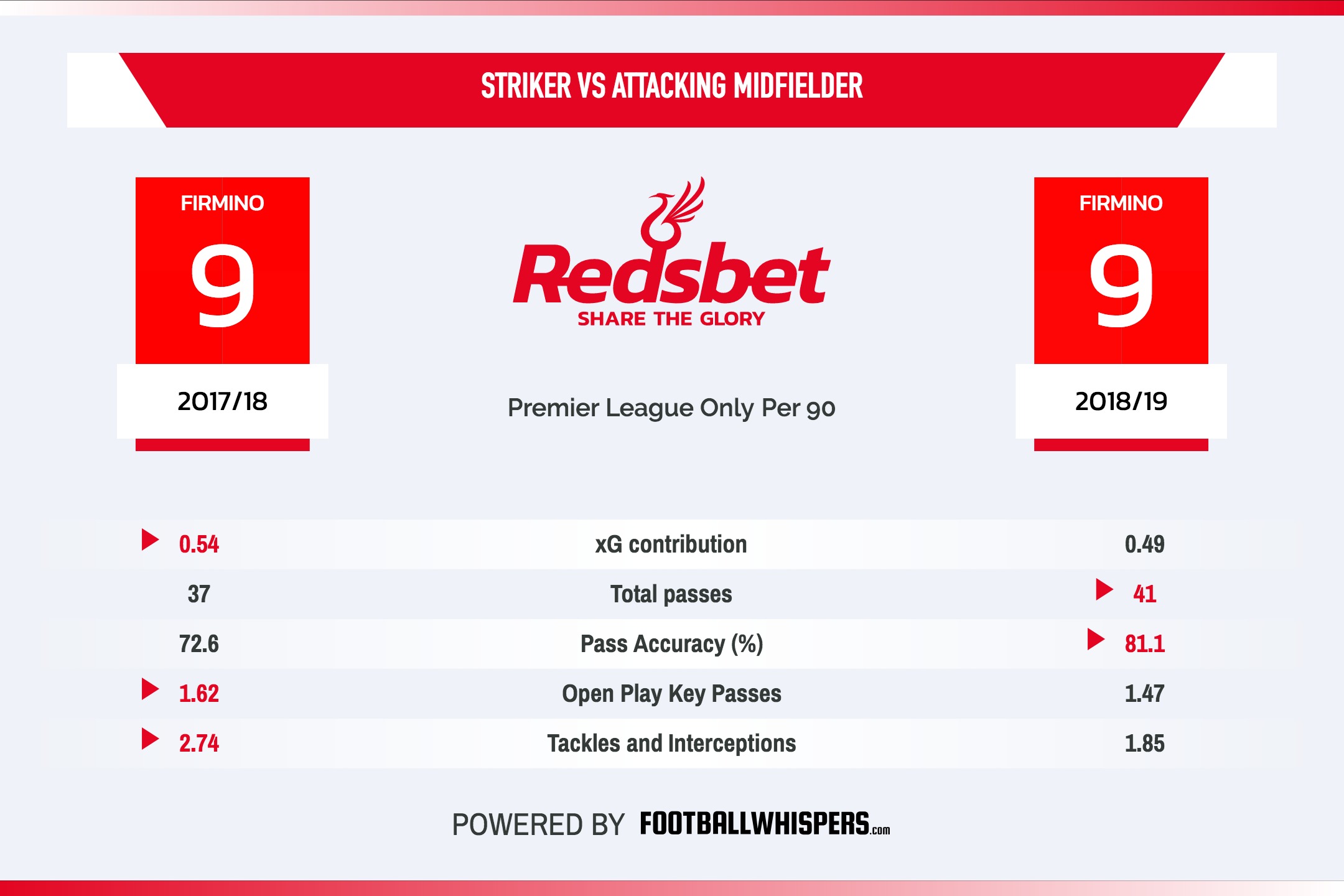 Against Fulham on Sunday, many thought he put in an underwhelming shift and was on the peripheral for most. Yet he finished the match with five key passes, two clear of Andy Robertson and three ahead of Xherdan Shaqiri.

His 92 per cent pass success rate could only be bettered by Virgil van Dijk and Gini Wijnaldum and that came from 50 passes, close to double what he averaged last term. Furthermore, Firmino’s passing accuracy has improved by close to 10 per cent this season despite him playing more passes.

If his stats were judged in isolation, they would paint a picture of a creative force and with him in that role, the Reds are scoring more regularly.

Why compare Firmino 2017/18 to the Firmino fans are witnessing now when they’re completely different players? He’s no longer a false-nine but is instead an attacking midfielder. And a pretty good one at that. The conundrum has been solved; he’s just good at everything.