Liverpool have moved on without Belgian prospect

In late July 2014, Liverpool’s recruitment department would have been wearing smiles as wide as the Mersey after securing quite the summer capture.

That post-World Cup period was a frenetic few months for the Reds as Luis Suarez left amid canine controversy and the £65million was reinvested on the good – Adam Lallana, Dejan Lovren, Emre Can; the bad – Lazar Markovic, Alberto Moreno, Rickie Lambert; and the ugly – Mario Balotelli.

However, amid all that activity was also a teenage striker who enjoyed a breakout tournament and was one of the success stories of a promising Belgian side who reached the quarter-finals but largely flattered to deceive in Brazil.

If Divock Origi’s presence in Marc Wilmots’ 23-man tournament squad was a surprise after a modest campaign for Lille, the impact he had at the World Cup was a shock with the 19-year-old dynamic in the super-sub role.

Origi bagged the winner in the crucial 1-0 win over Russia, even prompting a baby dolphin to be named after him, and was just the sort of unheralded, exciting talent to explode at a World Cup that was commonplace before the digital age.

But there was to be no frenzied speculation over his future because Liverpool had long held an agreement with the Ligue 1 side and, on July 24, he signed a five-year contract.

Based on a very small sample size, confidence was high that the club had secured a significant proportion of their future. You all know the rest. Four years into that contract and Origi remains a largely unknown quantity.

There have been glimpses, and in many of his fleeting appearances in a Reds shirt incorporate everything good and bad about his game, but the jury is still deliberating and we’re no closer to a verdict.

Our friends at Football Whispers attempt to delve into the mysterious case of Origi to work out what comes next for Anfield’s forgotten forward.

In terms of raw numbers, the 23-year-old’s record of 21 goals in 86 appearances isn’t bad and is elevated slightly higher by the fact that of the 51 Premier League games he’s played in, just 21 have been from the start.

Origi has spent his entire Anfield existence living off scraps. A handful of minutes here, a rare start in the EFL or FA Cup there. For a young player learning his trade with ability so raw it should really be classified as blue, it’s difficult to see how he could progress.

There is a sub-argument to be had here, in tandem with what Chelsea are doing, about the detrimental effect hoarding so much young talent is having to overall player development.

Buying youth is all well and good, but if you cannot give the players the oxygen of game time, how can they be expected to grow at the anticipated rate?

Would Origi be a better footballer now if he had stayed at Lille until he was 21 or 22 before making the next step? It’s impossible to calculate.

Looking at some of his countrymen, plenty moved on very young, struggled for minutes then worked their way to the top elsewhere (Lukaku, De Bruyne, Courtois), while others served apprenticeships in lesser leagues before making the step up in their early to mid-20s (Hazard, Vertonghen, Dembele, Alderweireld).

There is no certifiable, UEFA-approved pathway to success and ultimately discovering what the right process is exists among numerous parameters, one of which is the individual.\ 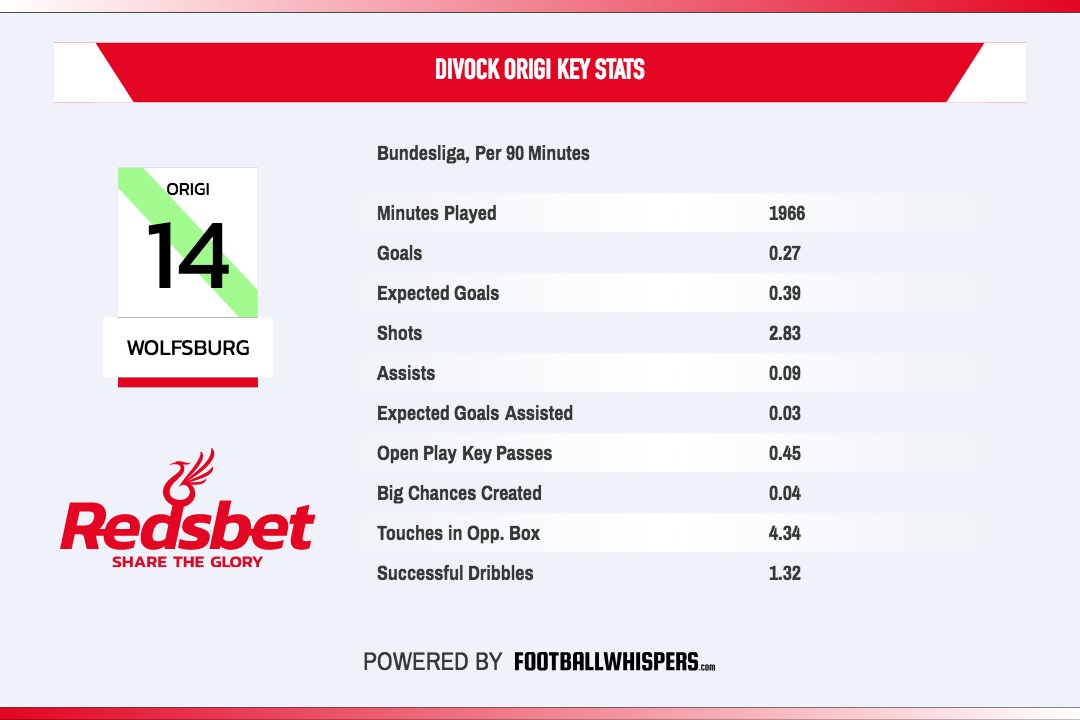 Origi could well have been taking the lead from Romelu Lukaku (West Brom) and Kevin De Bruyne (Wolfsburg) when he made the temporary switch to the Volkswagen Stadium last season to try and get a consistent run of games and show his capabilities in more than just sporadic cameos.

However, it proved an ill-conceived move given the situation he was stepping into at Wolfsburg.

The pattern of the 2016/17 season, in which they burned through three coaches and narrowly avoided relegation via a play-off, was repeated with the same mistakes made.

A lack of direction in the boardroom, losses of key players and ill-thought-out replacements led to the creation of a patchwork team without an identity while, at coaching level, Andries Jonker, Martin Schmidt and Bruno Labbadia all sat in the dugout with their own views on how the team should be playing.

Although Origi enjoyed 22 league starts, the most since the 2014/15 season when he was loaned back to Lille, it was difficult to gain any momentum or comfort within his surroundings such was the inconsistency in message from all sides.

Over the course of the season, Wolfsburg used 29 different players in starting roles and the Belgian played both as a central striker and right-sided attacking midfielder, no bad thing in terms of his overall development but against the backdrop of chaos, it didn’t help create any consistency. 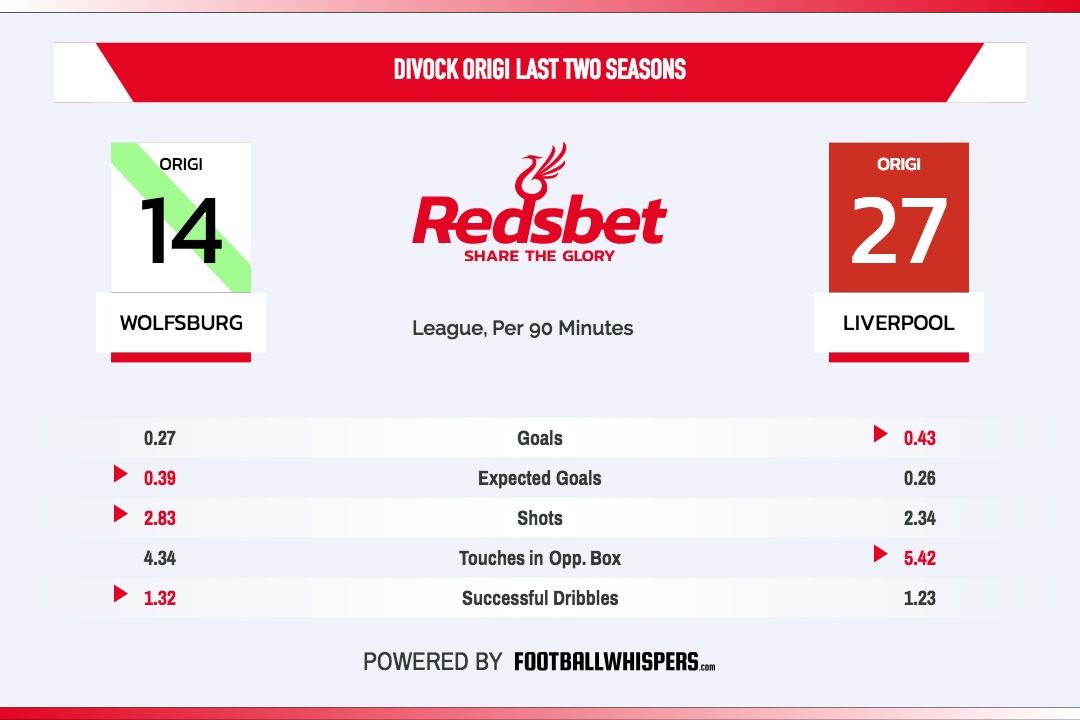 His six goals in 31 appearances testament to that, and he found the target just once after November 5, but this was also a team among the most shot shy and uncreative in all of Europe. Wolfsburg’s xG per game a pitiful 0.99, 15th in the Bundesliga, and their 0.7 big chances created rock bottom of the standings.

After surviving another relegation play-off, Origi returns to Anfield this summer with even more questions surrounding his future.

There is optimism that, in the right surroundings and with the right coach, his athleticism and physicality can be harnessed and a striker in the form of a pacey Lukaku can be harnessed. But with such scant evidence to go on, it’s difficult to support that view.

Should Klopp choose to retain him over these next 12 months, how often can he realistically expect to play, especially if Daniel Sturridge stays?

Origi appears a confidence player whose rough edges – questionable first touch and positional awareness – can be ironed out when he is in the groove, playing for a settled team which trusts and respects him and can put leaders around him.

At 23 he should be showing more but, in reality, Liverpool’s ambitions of a Premier League title challenge and further Champions League success don’t appear the best environment for him to move beyond that limbo.

The Origi experiment appears doomed to fail but before it has an irreparable effect, the decision needs to be made that it’s time to cut the cord. He can still enjoy a prosperous career and, who knows, could find himself starring for a major European club in the near future.

As wise as it seemed in 2014, there is no truer judge than time and sometimes it’s better to just admit you got one wrong.

Liverpool vs Manchester United: What to look out for