Despite our first defeat of the season, the title race is still in Liverpool's hands.

A loss may be a loss, but only by 1.2 centimetres. The course of a match is so rarely decided on such a tiny margin.

It doesn’t quite feel fair that a matter of millimetres cuts the gap at the top of the Premier League from seven points to four, but such is life. The Reds are still in a good position too, as Jurgen Klopp was quick to point out after the match.

“If somebody would have told me that after both games against Manchester City we are four points up, I would’ve paid money for it like you wouldn’t believe,” he said.

“We are still in a pretty good position so it’s all fine for us. Not in the moment, it feels really bad, but it’s only the moment.

“Tomorrow morning we wake up, it feels still average and then we have the opportunity to work on it and prepare for the next game and that’s what we will 100 per cent do. That’s all.”

Liverpool special Fan Boost: Virgil van Dijk to be PFA Player of the Year
WAS 1.80 NOW 2.00*

It was, on a number of levels, just one of those days. Not only did the John Stones-Ederson calamity hour narrowly stay hanging over the line, but Sadio Mane’s shot leading up to it hit the woodwork where Leroy Sane’s in the second half went in. Sergio Aguero scored from a freakish angle.

Throughout the match, the Reds just couldn’t make it stick when they approached the final third, but it was close. If players had been just a little bit more on the same wavelength, then Liverpool could have easily swung the balance of the game. 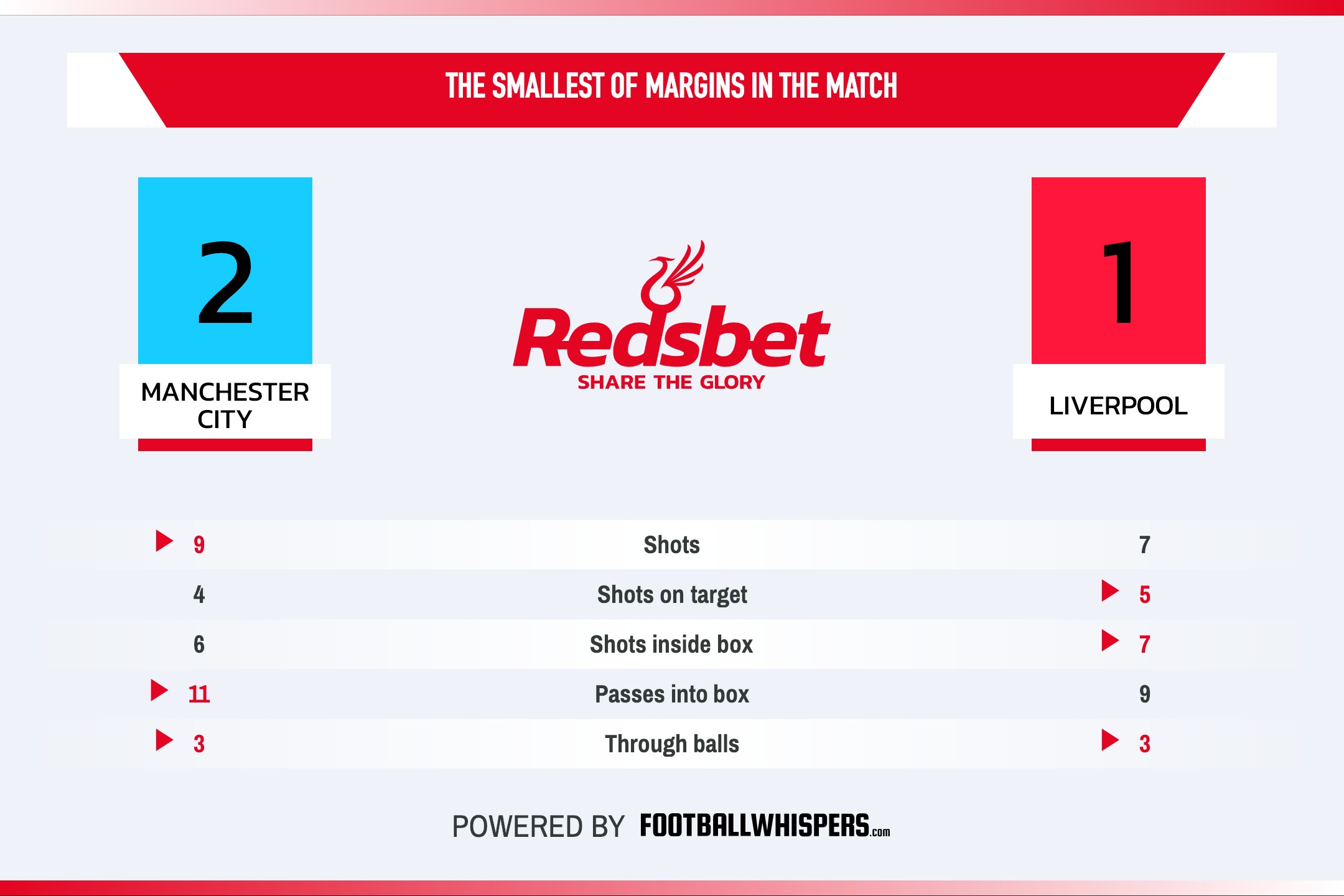 “Sometimes it’s just a little bit: the cross was not good enough or the last pass, that happens,” Klopp commented post-match. “But it’s not about one or two players, you just have to constantly work for the momentum.

“If you have it then try to keep it, if you don’t have it then you try to get it. In a lot of moments it was really wild, a lot of rusty moments when somebody kicked the ball out, a blue one, a red one, and you think ‘what’s that?’.

“But it’s because they felt completely under football pressure – ‘the next player is coming, I don’t have time’. It was a really intense football game for both teams. They won it, we lost it and it is sometimes like this.”

Are there lessons to be learned from the game, despite the fact that it was so close and the two teams so tightly matched?

“I don’t think [the result] had anything to do with any mental strength one side or weakness on the other side or whatever,” Klopp said, “it was a bit unlucky.
“Sometimes it can be lucky or not unlucky; they blocked twice against us on the line in the second half. Is it mentally stronger to block a ball on the line or not? It’s just luck, you are there or not there.”

Some will point to Dejan Lovren’s performance as evidence that an upgrade at centre-back is needed. They may be right. It’s not that Lovren is a bad defender, most of the time, but he makes bad decisions.

His decision to dive in and take down Aguero on 20 minutes, picking himself up a yellow card that he had to carry for the rest of the game, was a bad one. His decision to drift backwards towards Sane on a second-half Raheem Sterling counter-attack, leaving Aguero to go for a one-on-one with Alisson, was a bad one. He was the one playing Sterling onside in the lead-up to City’s second.

In fact, the moment he got the most criticism for on the televised coverage — Aguero’s first — was the least serious in pure defensive terms.

Aguero was coming back from an offside position having dived under minimal contact from Virgil van Dijk. Lovren checked over his left shoulder numerous times, but Aguero just drifted back onside at the perfect moment (for him). Realistically, the Croatian needed a shout that Aguero was there.

But Liverpool could still do with an upgrade. The squad is now at the stage where the major work has been done and it’s just a matter of filling up the chinks in the armour.

The main takeaway from the match, though, is that these two teams are phenomenally good and phenomenally closely matched. It’s City who have to make up the gap. Advantage Liverpool.