Anfield under the lights on a European night could easily be a tiresome cliché if it didn’t keep delivering. Tonight has everything the old ground is famous for in the European Cup; an atmosphere which combines anthems, flags and raw passion, football played at an incredibly high tempo, late drama and a Liverpool triumph.

Liverpool to win the Champions League 7.25

In the afternoon, it’s warm enough to feel like summer again but there’s a vindictive wind trying to rip every leaf from Liverpool’s trees. By nightfall, as we walk to the ground rain has set in and thousands of black hoods are up on the climb up Sleepers Hill and Walton Breck Road. In the old days of standing it’s the type of night that would have steam rising off the packed bodies in the Kop.

My mate Hanno and I have bought a whisky miniature apiece from a nearby, grimy little newsagent – just to enliven proceedings, of course – and we’re shocked to see beer on sale on the concourses. It seems that our phrase “dry ground” – which always seems to exaggerate the Liverpool accent – is about to depart the match lexicon.

Later, at half-time, while enjoying both ale and spirits, our journalist friend Brian Reade concludes with absolute authority that the UEFA booze ban has been in place since Heysel. My dad, who meets up with us at the break on European nights, would only be half the man without his legendary, multi-flavoured hip-flask so I think we’ll carry on pretending it’s an embargo still in force just for old times’ sake.

The back of the Kop is absolutely packed; overly full is you’re really worried about your safety, as hundreds of younger lads “migrate” from appointed seats to the upper sections. The stewards fight a futile battle to clear the aisles which fill up time and again each time Liverpool attack. PSG have turned us round at the toss – always taken as an affront – and are paying the price as a battery of early corners whip the crowd into an early frenzy. Songs have already given way to visceral roars.

It’s like a sauna up here; seats used only to house coats. Mine is tied round my waist as though I’m thirteen again and playing footy in the park. 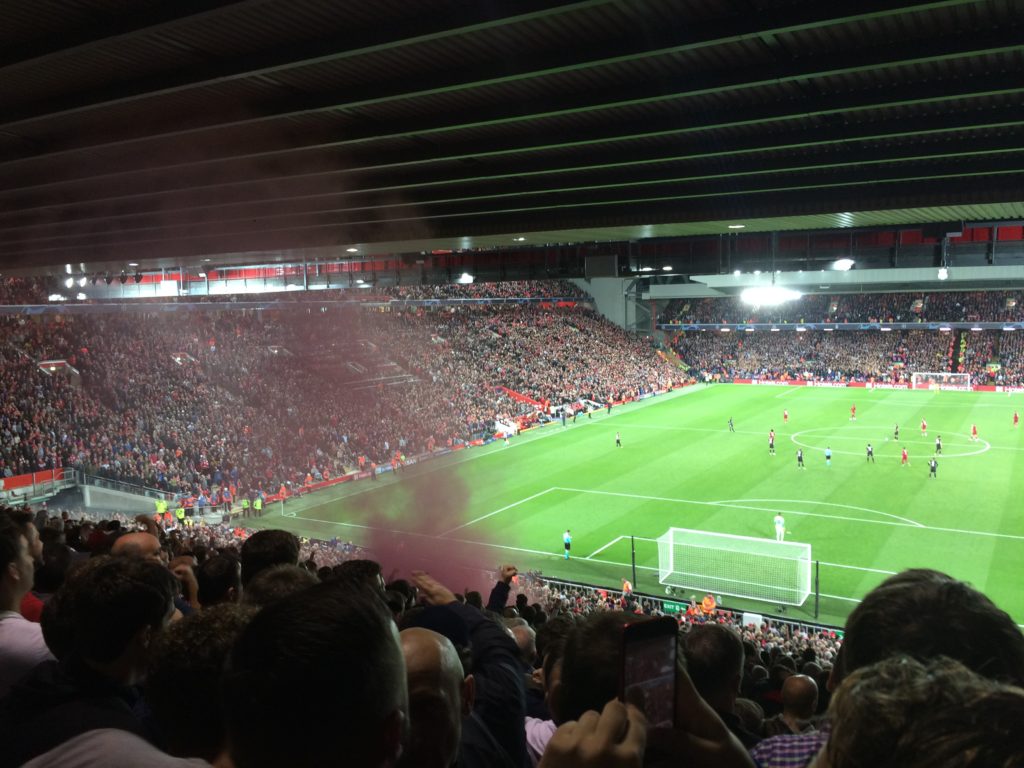 The French champions just about weather the storm but as they begin to establish a foothold, the Reds come again and recalled Daniel Sturridge nets with an emphatic header from cult hero Andy Robbo’s cross. I’m just about recovered from the bustle of celebratory elbows to the ribs to see the scorer unveil his wriggly arms as the timeless, dulcet tones of stadium announcer, George Sephton announces the scorer – merely for affirmation.

Soon after, James Milner, who earlier nearly snaps Neymar in two near the touchline, rams home a pen to put us two up. PSG, for all their millions, have absolutely gone in the head and some of the simplest cross-field passes are cheered mockingly into touch by those in the Kenny Dalglish Stand. I’ve seen this film before. Chelsea, Juve, Barca, Inter Real, Roma, City, United have all melted in this midweek cauldron.

Somehow, despite Liverpool remaining dominant, the French snaffle one back just before half-time. Their own supporters have added to the sense of occasion. PSG might still have the feel of a manufactured force but they clearly have a decent away mob and throughout, the view from the Kop end has a swaying, clapping, bouncing Parisian mass as the visual backdrop in the distance.

Mo Salah, last season’s hero, is still worryingly off colour and nearly ruins the night late on by losing possession inside his own half. Neymar, suddenly interested on a night when he’s been largely insipid, profits, scores and raises his arms in front of us like he owns the place. It’s almost as if he’s the most expensive player in the world. Contrastingly, Salah’s penance is substitution as he troops off, head bowed in shame.

Mo frustration at his lost mojo mirrors ours. Some fans traipse down the steps and leave; always a furtive, apologetic act – the football equivalent of the walk of shame. But – and it’s a big brutal but for the absconders – those of us who hang on are rewarded with the moment of the season so far. Firmino – like a sniper with one eye closed to set his sights – rattles an angled shot across goal and into the corner at the Anfield Road end which practically the last kick of added time.

It goes off. Bedlam. I end up three rows from where I should be and don’t quite know how. I’m standing on a seat and am knocked off it about three times as we all clamber like kids to be King of the Kop for a few moments. The final whistle sounds amid the deafening thud of Allez, Allez, Allez – a signature European anthem that really should be reserved for moments like this.

As I walk away, still breathless, I reflect on my mate James Cutler’s comment at the point the Reds made it 2-0 much earlier. “Imagine being one of the pricks who prefers the league to this.”

Back to the bread and butter Saturday.