Those nine months: Storming the Palace

You simply can’t beat the first away trip of the season.

But Selhurst Park, that most inaccessible of London grounds – on a Monday night – can take the shine off things, and for a lot of supporters it means missing out altogether.

I’m going though and we have to make the best of it.

It’s a good excuse to stay over. The still farcical notion that you can’t get a train from London to Liverpool after 9pm precludes the idea of day return.

Sometimes I just like my own company. There’s plenty of time for comradeship – and there will be lots of it – later. Things don’t need to be arranged. The 12.47 from Lime Street gives me time to be in “the Smoke” before three, lash a bag in a dingy hotel and get out.

London is interminably hot in summer; a brilliant City but one which gave humidity its middle name. I have a single cold pint outside some posh bistro and watch the capital do it’s timeless, pre-rush hour thing. The wide streets are already a noisy blur of horns, sirens and drumming taxi engines. In contrast, the silent performers on this mad stage – like mime artists – are the fleets of cyclists. At one point, floods of them come past in a colourful scene – posted direct, minus the sunflowers – from the Tour de France.

I’m already south of the river and from where I am, it’s a tube from Southwark to London Bridge and an overland train to Norwood Junction. Palace’s ground is buried somewhere near in a throbbing South London metropolis. Just follow the Eagles tops and you can’t go wrong, which is reassuring for someone who’s watched Liverpool everywhere with no sense of direction.

There’s still an hour until kick-off and I’m only strolling, incognito among the Palace throngs. I pick out the older heads who stand out a mile, largely colourless, among the shirt-wearing younger brigade. You just know these lads (they’ll always be lads) with their lines and furrowed brows have been through the mill with Palace. Some of them have probably run the gauntlet at Anfield way back when and lived to tell a chilling tale.

Then, as I do a full lap of the ground, in awe of actual old-style floodlights piercing the sky at awkward angles, I begin to bump into our lot. Long queues form at the Victorian turnstiles, so I hang back and see practically everyone outside as hundreds pour off the coaches. These boys will lucky to see their beds before work tomorrow. That is dedication.

Within half an hour I’ve come from the heart of England’s capital city to an enclave that is pure Merseyside. You’re suddenly part of a gang, temporarily ageless, where the real world is on the outside looking in, through a locked, frosted window.

Finally inside, I queue for a bottle of lager, awful and overpriced, but actually cold and welcome on this sultry night. I can hear the Reds coming out but I stop for a chat with Jacko, a contemporary and relative neighbour of mine with whom I’ve been on away game nodding terms for thirty years. We’ve only recently bothered to swap names. Same old faces, different places. 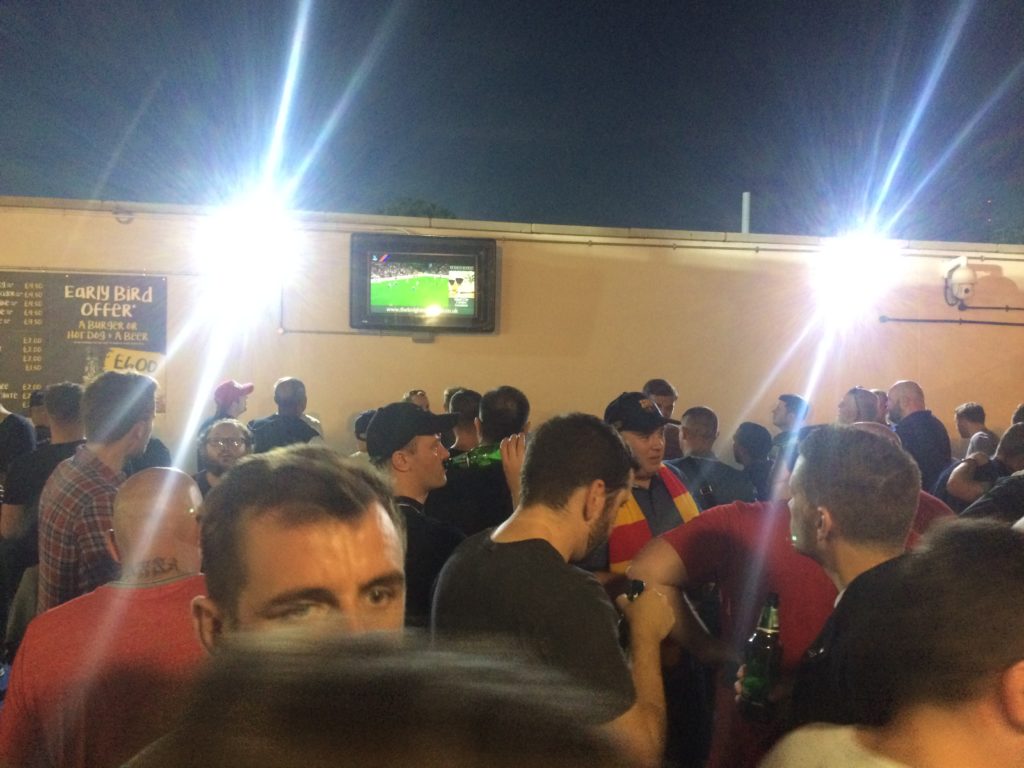 There’s a fanatical Asian girl standing on my seat. I’m not bothered. Like all of us she’s straining for a view through a letter box, sight of the pitch cropped by the low roof of the Arthur Waite stand. I just tuck in, stand in front and marvel at her enthusiasm. In front of me there’s another guy with a selfie stick snapping his whole family throughout. I’m in every one of his photos, like an unwelcome distant relative who’s turned up to stay.

That we win like we do, with a hint of controversy makes it all the sweeter. Salah wins a dubious penalty and a cold-blooded James Milner scores, to Roy Hodsgon’s obvious chagrin. In the final moments, Sadio Mane rounds an exposed keeper to light the blue-touch paper. Liverpool, in white/grey that reminds me of the vintage class of 1988, are illuminated in phospherent Pyro as they celebrate right in front of us.

Alisson Becker has brought calm in goal, Virgil Van Dijk has been a man mountain and we’ve ground it out. Naby Keita really shines. Stellar away stuff and still time for a pint or two in the London night.

We’re back home at the weekend. Brighton await, knowing their task.

Liverpool to win next 3 PL matches, Brighton Leicester and Spurs 17/4*