Those nine months: Leicester (away)

I always forget just how far away Leicester is, buried somewhere in a nondescript part of England that the word “mid-lands” was invented for.

I’m driving today and genuinely don’t mind my solo expedition. I’m on the road early and after taking on the weeks affairs via three hours of Radio 4 osmosis, I’m parked a stone’s throw from the King Power Stadium by eleven o’clock. I don’t realise at first but I’m walking up Filbert Street; where I’ve left the car at the cost of a bloody tenner. I look around but can’t get a sense of where Leicester’s old ground of the same name might have been in the confines of these narrow old roads.

The area isn’t exactly teeming with pubs and I fancy a pint. I nosey into a gaff called The Symphony Rooms which is all chandeliers and posh white drapes but full of badly-dressed mankind in Leicester shirts. It feels like I’ve gate-crashed Jamie Vardy’s wedding. I have a nice cold pint of Strongbow which I take outside to avoid further sightings of the middle-aged in three-quarter length “shorts” and Matalan trainers. 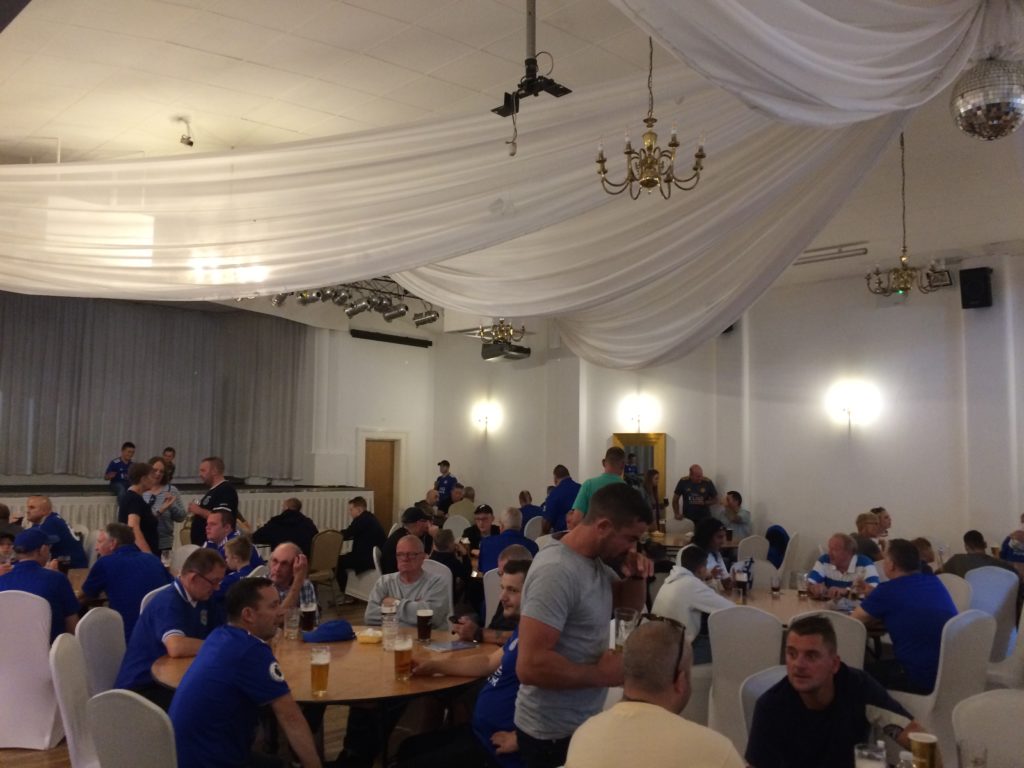 I have to pick up my ticket outside the away section. I wander about for a bit and bask in the sunshine; watching new media in action as a Youtubers “Neeks Sports” film a lively interview with some very banterish Liverpool fans. It seems almost everyone wants five minutes of fame these days, the match almost an afterthought to getting your grid on TV.

Inside, I’m with my mate Rob and his two lads. He and I chat downstairs for a while, Rob semi-bemoaning Jordan Henderson’s return in favour of his new beau, Naby Keita, before we find our seats.

All the Premier League fanfare is conducted amid the usual din of the home PA before the game begins to a more comforting back drop of an expectant away end in full cry. We’re tucked away in one corner of the ground but are making ourselves heard. I spot and say hello to an old face, Dave Daley who “policed” the shenanigans of Barnes Travel away coaches for what seemed like two decades.

Roberto Firmino looks to have recovered some of his zest and is only denied by the legs of Kasper Schmeichel. The rebound falls to Mo Salah who – incredulously – fires wide of an almost open goal. Firmino though is on fire and soon after he plays in Sadio Mane who pokes home his fourth goal of the season.

Our end goes nuts and there is some baiting from contorted faces among the Leicester posse either side of us. If you ever want to see the definition of an empty threat, just watch this countrywide phenomenon as the “Divide divvies” go into overdrive. Our younger lads, brought up on the tall stories of yesteryear lap it up.

The Reds are on fire and most of us settle back expecting a hatful. Not my mate Rob though, who insures heavily against the acute pain of Liverpool not winning from this position, however unlikely the prospect. He lumps on Leicester at 20/1 and also covers the draw at 8s. We all have our idiosyncrasies and I wonder later when gets home how much the win is tainted by a dent in the bank balance. Knowing Rob though, it’ll matter not a jot.

We nip downstairs for a drink on 40 and swap stories of the million goals missed while we’ve been queuing at bars. We mock the self-obsessed who are disappointed when they miss Liverpool goals and laugh at ourselves when Firmino adds to this particular tally while we scrum our way to the front. As usual it takes ages to get a bevy; the one chink in the armour of the Premier League cash cow remains its enduring inability to get a pint into hand of people willing to pay five quid for a tepid lager.

The second half is a massive trial. Alisson Becker contrives to lose the ball on his goal line in comedy fashion, allowing Leicester to pull one back and reenergise a home crowd imbued with the idea Liverpool can always implode. Most of the action, which we squint to see through bright hot sunshine, is at the far end and the heat haze adds to a blur which would normally be pierced by a crushing late equalizer. But, this Liverpool team is maturing as a defensive unit and this is embodied by a last ditch Joe Gomez lunge and block which helps seal the points.

Time to drive home. It’s been a quiet day by my standards but powder needs keeping dry. Spurs in a fortnight on the 06.44 from Lime Street could get messy.

Reds Tough It Out