Mike Nevin's assessment of an intense away day in London for The Reds as a draw at the Emirates somehow feels like a disappointing result.

The Emirates is a beautiful stadium trying its very best to be a football ground that reflects the heart and soul and rich tradition of Arsenal Football Club.

As you walk round the back of this vast arena the neon signage that illuminates the outside steps and concourses casts an orange evening glow over a magnificent statue to Thierry Henry; the French wizard worthy of preservation in his pomp while memories of his withering pace, precision and trickery are still vivid. As I stride past and glance up at “him”, I recall Henry not so much in red and white but in Arsenal’s yellow away strip vaulting and bursting past Jamie Carragher at Anfield with smoke at his heels.

On huge murals that surround the ground, the Gunners greats of the ages stand shoulder to shoulder and embrace – Henry again with Denis Bergkamp. But theres also Ted Drake and Eddie Hapgood, Liam Brady, David Seaman, Charlie George and Bob Wilson to name but a few Highbury heroes drawn from eras as far back as Herbert Chapman’s treble of championships from 1933 to 1935. Inside the stadium each Arsenal trophy in their history decorates a banner design that circles the stands; immediately you pick out the years 1950 and 1971 (when the Reds were twice their FA Cup Final victims) and a nod to their most famous night at “Anfield 1989”.

It is a pleasing setting but with the home crowd disparate across three sweeping tiers a place that doesn’t intimidate. There isn’t a definitive End to rival our own Kop – nothing to ape their old North Bank terrace at Highbury – and the home fans struggle to reflect the intensity of their own team’s efforts to mirror Liverpool’s attacking threat.

In the first half, The Reds – unfamiliar in shocking purple – play only in fits and starts but still manage to worry the Arsenal defence. When Sadio Mane taps home after Roberto Firmino’s lob comes back off the post at the far end there is only a muted, hopeful cheer from our crowd, so obvious is it that Mane is loitering offside.

Our view from the enclave of the away section is capped by the lip of the stand above, giving a restricted pillar-box sight of the action. In front of us, Alexandre Lacazette arrows a shot across goal and hearts miss another beat when Alisson Becker comes for a high ball but fails to connect and Henrikh Mkhitaryan’s glancing header looks for all the world like it’s going to ripple the net until the ball sails narrowly beyond the post.

Fabinho is irritatingly sloppy in possession for Liverpool and as the tension begins to grate he gets a few impatient catcalls from an increasingly tetchy away section.

The expensive Brazilian is short on touch and confidence; for the moment at least struggling to give the Reds’ midfield the snap and tempo offered by the absent, hamstrung captain Jordan Henderson.

Before half-time Virgil Van Dijk twice goes painfully close as we crane our necks towards the far end. First, he ambles forward to collect Mo Salah’s flighted pass but is foiled by the swift advance of Bernd Leno in the Arsenal goal; then a towering leap trumps Leno’s jump but his header bounces agonisingly against the post with the goal vacant.

This far the Liverpool section has been hushed as though mid-evening hangovers have set in but the reality is that understanding the desperate need for three points – even in the toughest away fixtures – stifles the voice as much as it stirs the passions. Manchester City and a non-existent margin for error are never far from the thoughts, colouring everything about this solid if still unspectacular start to the season. It’s exhausting.

The second period has the Reds pouring towards the goal right in front of us. Proximity somehow makes Liverpool seem more potent as though we can use our own eyes and will to suck the bulk of play closer and influence the outcome. Andy Robertson’s lovely pass frees Mane for a sudden dart down the left and his cross has Leno groping but failing to gather. The loose ball flicks off a defender’s heel and tees up an inrushing James Milner who –  with cold, protestant virtue – belts it home.

Suddenly, all is right with the world as our end goes crackers and Milner is showered with love; buried under a pile of exultant lads in purple.

Now the songs come out and fill the North London air. Inhibitions are washed away in the blink of an eye and the Reds are on the verge yet again. Still half an hour to suffer though and if anything the nerves jangle more at 1-0 than they do before this precious strike. Arsenal begin pour forward but time for the home side is ebbing away. The eighty minute mark passes and we’re still on course for a vital win.

But then, utter deflation as Lacazette running onto a pass draws Becker from goal, spins away and drills a curler into the unguarded net. It’s such a sinking feeling. It shouldn’t be like this and maybe in five months’ time a worthy point here will represent something better than it feels right now. Time to take stock and pray that someone; anyone can do this Liverpool team a favour when we expect it least. 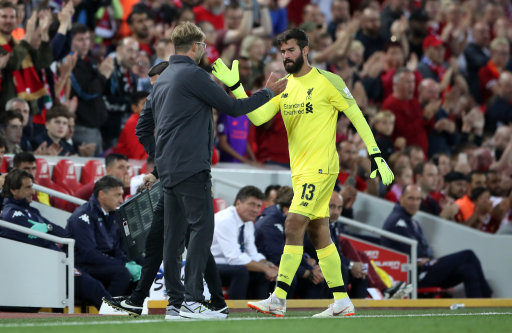