Mike Nevin takes a look back to Saturday as Liverpool made it seven wins out of seven.

However mundane games like this seem to the likes of me, it’s always someone’s first Liverpool match.

In the pub beforehand, my dad has arranged to meet his mate Dickie who has a relative with him for today’s visit of Southampton. Jonathon, his cousin from Canada, is about to make his Liverpool bow and is naturally beside himself with glee and a heart-warming sense of privilege. He’s 49 but his face is beaming like a kid. I’m a bit jealous that he’s got that incredible moment ahead of him when you get your sight of the dazzling green of a proper football pitch for the first time; and I wonder briefly does it have the same impact on the eyes of an adult as it does on a child.

Dickie – who has watched the Reds since 1960s – has kindly given up his seat in the Kenny Dalglish Stand for the day. He’s never met his cousin before but they are now united for the first time by football and Liverpool in particular. The family tale is fairly typical of Merseyside families where the sea was a natural source of work. Jonathon’s grandad made several transatlantic crossings as a ship’s purser before setting sail – amid harsh economic times- for a one-way trip in 1932. Although his own father showed no interest in football, intrigue for his roots has finally led Jon to Anfield.

Naturally the cameras are out on the walk-up to the ground and I insist that the album isn’t complete without a picture on dog shit alley (otherwise known as Back Rockfield Road), a tragically poor street, framed in barbed wire, within spitting distance of the corporate behemoth that is Anfield. 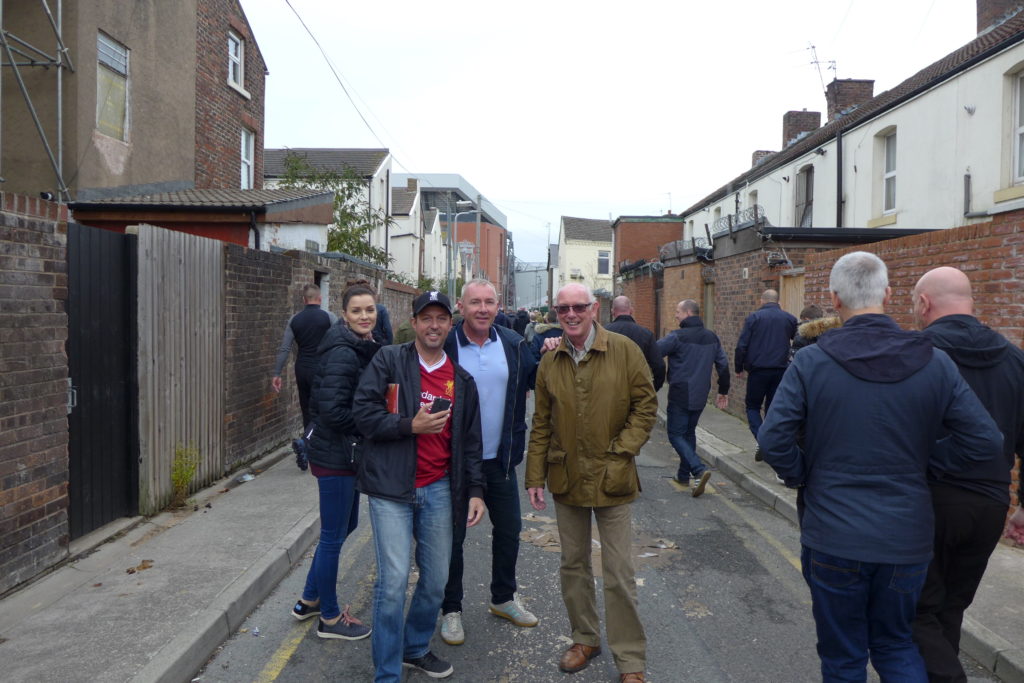 I wish I could trade Jon’s enthusiasm because there’s something about Southampton at home that struggles to tickle the senses. The same applies to a number of my usual Kop comrades who have absconded to watch non-league City of Liverpool FC visit Chester in the FA Cup. We’re all seeking something different in life but some things remains reassuringly constant and I work out during a break in play that I’m probably approaching 1,000 games at Anfield but, having lost count years ago, will never know when I reach that landmark.

When it comes to first Liverpool matches mine is hard to beat, even if still I cringe a bit about the ticket a six-year old probably denied a loyal fan. Mine wasn’t at Anfield but at Wembley for the 1974 FA Cup Final. My first goal is still imprinted on my memory; a rising Kevin Keegan drive that billowed those classic old Wembley nets to put Liverpool ahead against Newcastle.

Poor Jonathon’s first goal – not that he’ll care too much – is a scruffy oggy that takes about five deflections. From where we are in the Kop, so distant from the Annie Road, it’s hard to tell but the probable mild panic and silence from tannoy man, George Sephton – who loves announcing the Liverpool scorer – tells its own story. Joel Matip soon loops in a header from a corner to make it 2-0. My own celebration is muted. I’ve never particularly liked Matip, a player who switches off so easily I can imagine him falling asleep in his dinner.

Everyone is much happier with the third goal which ends the contest before half-time. There’s a been a lot of love and encouraging songs for a deflated Mohammed Salah today. He’s been much perkier in this first half. Earlier, he nearly one-twos his way through before having his shot deflected wide but when another Anfield (full) debutant, Xherdan Shaqiri smashes a free kick against the bar, Mo, in his unfabled poacher mode, taps home.

The second half is a non-event. I imagine Jurgen Klopp agreeing with Mark Hughes during the break we’ll stop beating them up as long as they let us have a kip. That’s what I’m contemplating through most of the last half hour and I sneak off on 85, hearing the cheers and jeers for an offside Salah goal on my way out.