The sheer size of the trophy exudes importance and glamour, the shape of its immaculate curves imprinted in the mind’s eye of every Liverpudlian.

This is no time to get sniffy about the European Cup.

I use the competition’s former name to give it the resonance it deserves, to reinforce what winning this special tournament means – being crowned the continent’s best. The sheer size of the trophy exudes importance and glamour, the shape of its immaculate curves imprinted in the mind’s eye of every Liverpudlian.

All our Bayern Munich vs Liverpool Markets

I wish I had a quid for every time I sketched the outline of the European Cup in an exercise book during maths and science lessons. To the ignorant these were my wasted years but instead I was travelling – at least in my head – to the far flung outposts of Europe; learning about places where Liverpool had triumphed and failed; from Rotterdam to Tblisi, Bilbao and Bucharest, Lodz to Sofia.

Before 1977 – and I can only recall this a small child – the European Cup was seemingly untouchable, a distant dream, the definition of forbidden fruit. Then it became ours for the first time, then an increasingly familiar presence but never losing its unique sheen, its polish never dimmed. On its return from Istanbul in 2005, half a million flooded Liverpool’s streets to welcome heroes but mainly to get a fleeting glimpse of that cup.

When UEFA created the Champions League, they had the good sense not to meddle with the prize on offer, to retain the iconic trophy so as not to interfere with competition’s lineage. Winners today are connected back to the great Milan team of Gullit and Van Basten, Ajax’s Johann Cruyff and Johnny Rep and Bayern Munich’s Gerd Muller and Franz Beckenbauer.

Bayern, like Liverpool five-times winners, are synonymous with Europe’s elite tournament. Wednesday night’s return leg at the Allianz Arena drips with prestige and history and yet for some Liverpool fans it represents small beer compared with the desire to see the Reds land the Premier League title. But try telling that to Jurgen Klopp, born and raised in Germany; Bayern as much an intrinsic rival as Manchester United might be to ourselves. Try persuading Mo Salah, robbed of the chance to shine in Kiev, that to exorcise those demons matters not.

If Liverpool do go on to win the Premier League, it will be because they have been the best at swatting aside the flotsam of England, putting the likes of Watford, Bournemouth and Crystal Palace to the sword. That in itself is no small achievement given the years of unwelcome hiccups against the lesser domestic lights but is in Europe where legends are made; where Salah, Sadio Mane, Roberto Firmino can aspire to heights reached by Messi and Ronaldo. For Virgil Van Dijk, comparison to Paulo Maldini and Franco Baresi comes not with mastering Troy Deeney but marshalling Robert Lewandowski. 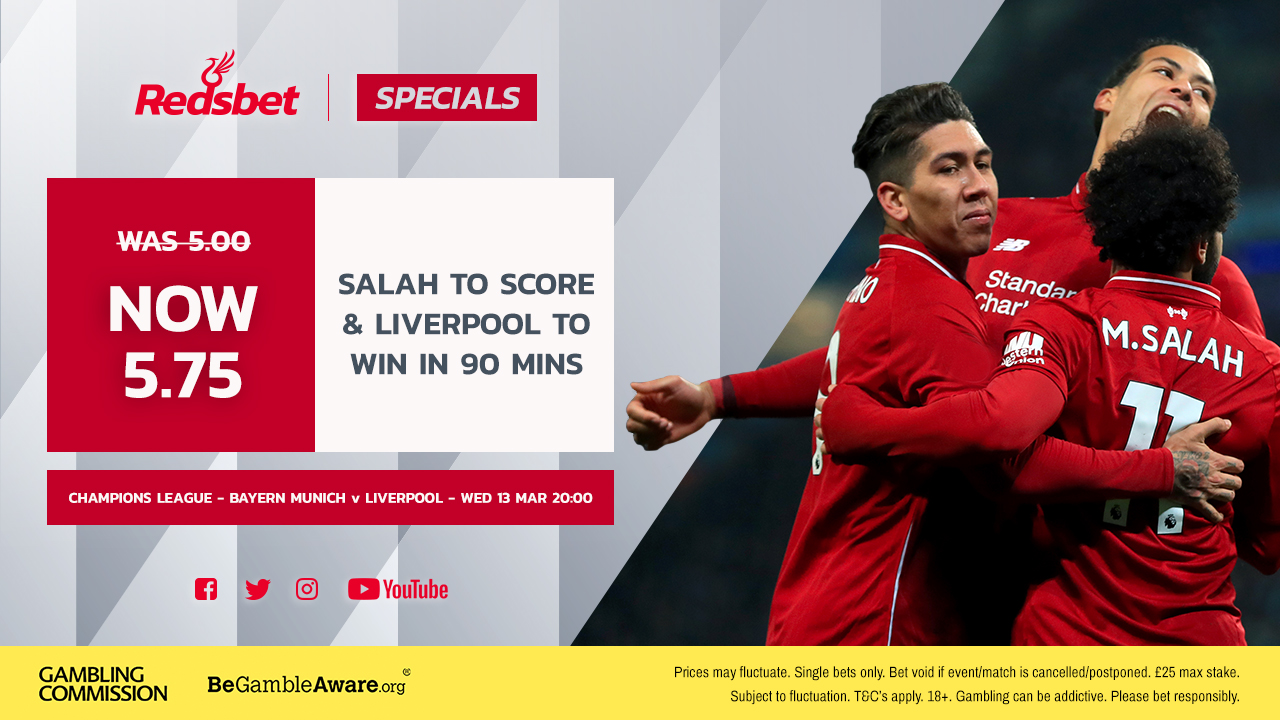 The odds on Liverpool lifting a sixth European Cup will halve if they can progress. With Real Madrid’s recent domination now at an end and Paris Saint Germain also eliminated, this is an opportunity not to be missed. No Liverpool fan can stop dreaming of ending the 29-year hiatus at home but nothing elevates a club’s status like success in this competition. Furthermore, to be a bystander while United, Manchester City and Spurs contest the prize is a thought not worth contemplating.

Liverpool still hold most of the cards. At Anfield Bayern were noticeably conservative, content to sit back and absorb pressure but they might regret not being more aggressive in pursuit of an away goal. The Reds now have the chance to play on the German’s nerves and bide their time with the constant threat of counter-attack. Klopp will impress upon his team that the respect (or trepidation) Bayern showed in the first leg points to an underlying inferiority complex.

Reaching the last eight isn’t a benefit felt in isolation. Liverpool need to feel buoyant if they are to keep those title fires burning. Exiting Europe at this stage – after last season’s odyssey – would be deflating for players who cherish performing on the grandest stage. All this season lacks so far is a signature victory away from home and to triumph in Munich would not only set fair the path to Madrid, but instill the required belief to see out the domestic quest.