The Reds’ Final Pre-Season Game Of The Summer – Liverpool vs. Torino Preview

The eventual 5-0 victory again showed why Jurgen Klopp’s side are being tipped to mount a genuine title challenge this season, with free-flowing football on show and more squad depth evident.

There’s now just one more match for the Reds this summer, as they welcome Torino to Anfield on Tuesday night.

Klopp insisted that Liverpool play a home game during pre-season, in order to give something back to the supporters and provide them win an evening to remember.

It should be a great night.

The Reds have lost just one of their eight pre-season games and even that came in undeserved fashion against Borussia Dortmund.

Both Man City and Man United were defeated, while the drubbing of Napoli was the most commanding showing yet.

Alisson showed what he is going to bring to the table during a solid debut and fellow new faces Fabinho, Naby Keita and Xherdan Shaqiri have settled in beautifully.

Klopp now has an almost fully fit squad to choose from, with the front-three of Mo Salah, Sadio Mane and Roberto Firmino fit and ready to wreak more havoc in 2018/19.

Expectations have rarely been greater prior to the start of a new season, and rightly so.

Torino, meanwhile, have enjoyed a productive pre-season of their own, winning all four of their matches and not conceding along the way.

Liverpool will be another level up from those they have faced, however – Pro Patria, Renate, Nice and Chapecoense – so it will be the first genuine test of their quality.

Andrea Belotti is Torino’s star man, with many of Europe’s top clubs showing an interest in the Italy striker in recent years.

In terms of other household names the Serie A outfit are fairly limited, although Adem Ljajic is a talented attacking player and goalkeeper Salvatore Sirigu has undoubted pedigree.

Managed by former Watford boss Walter Mazzarri, Torino have matured into an established top-half side in Italy and will pose a threat at times on Tuesday.

The Anfield clash promises to be a special occasion, with an almost party-like feel to be expected.

Klopp and his players are expected to dedicate time to posing with the fans for photographs and signing autographs, with plenty going on in and around Anfield throughout the day. 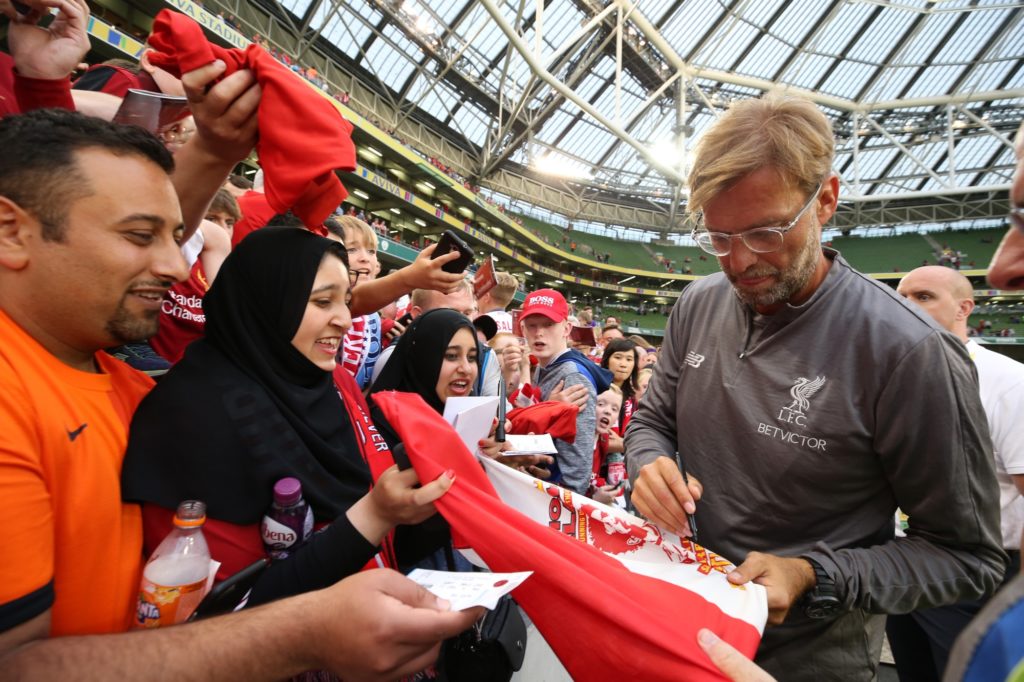 The match itself is Klopp’s last chance to perfect his plans before West Ham come to Merseyside for the Premier League curtain-raiser on Sunday afternoon.

The German is expected to pick a strong-looking side but plenty of changes will be made in order to retain a freshness ahead of the weekend.

There are likely to be home debuts for Alisson, Fabinho, Keita and Shaqiri, with Klopp believing it will benefit them to play at Anfield in an unofficial capacity first.

Joel Matip is the only squad member missing through injury, with Ragnar Klavan and Adam Lallana in with a good chance of featuring.

Jordan Henderson and Dejan Lovren have only just returned to training after their respective summer holidays, so Tuesday’s game will come too soon for the duo who impressed so much at the World Cup.

Simon Mignolet is also back, but he is still expected to make a move away from Liverpool before Thursday’s transfer deadline.

This is the first time Anfield has hosted a pre-season friendly since 2014, when Klopp’s Borussia Dortmund team were taken to the sword in a 4-0 win.

It is difficult to look beyond anything other than a Liverpool victory, considering the confidence they are playing with at the moment.

Torino also don’t have as much football in their legs this summer, making them more under-cooked than their opponents.

On what is expected to be a lovely evening in Liverpool, Klopp’s men will treat the supporters to an entertaining showing and finish off pre-season in productive fashion.

They will then be waved off into the sunset, as we all dream of that first-ever Premier League title coming the Reds’ way in 2018/19.