Dan Thomas documents the rapid rise of Andy Robertson after another impressive performance vs Fulham.

Liverpool haven’t had the swashbuckling start to the season that we were all hoping for and to an extent, expected.

In what was assumed to be a campaign of yet more attacking football with added solidity at the back, we’ve certainly got the latter if not as much as we would desire of the former. The 2-0 victory over Fulham is a perfect example of a game where we’ve given very little away and taken two chances. It’s a game last season we would likely have won 6-0.

Sadio Mané, Roberto Firmino and Mo Salah are all scratching for the blistering form that brought them a reputation across the continent last season. That being said, the Egyptian King seems to have turned the corner and is now very much back amongst the goals.

But one of our players who continues to impress on a weekly basis is Andy Robertson. Along with Virgil van Dijk, the Scot has been the model of consistency and has truly made the left back position his own.

After finding it took a couple of months to adapt to the way Jürgen Klopp plays, Robertson now embodies it and is one of the integral reasons our defence has been completely transformed.

He is dynamic in attack and very rarely beaten in defence. He has marked some of the best wide players in the sport out of the game over the last eleven months and the way he defends on the front foot was the basis of our run to the Champions League final. It’s no coincidence that since we put him into the team, we have defended better. He knows when to leave his feet and when to hold players up. He is a very instinctive and very clever defender.

Offensively, he is a much underappreciated weapon. His delivery into the box is amongst the best in the league, and his peach of a cross allowed Xherdan Shaqiri to steer home the crucial second goal in the Fulham game. Robertson has already picked up three assists in the league so far this season with a further two in the Champions League. A very impressive return for the full back which already matches his total for the entirety of last season.

Robertson also takes up good positions in the box and is unlucky to have just the one Liverpool goal to his name so far – he was denied a goal on Sunday by a sharp save from the excellent Sergio Rico, in goal for the visitors. You would think that it is just a matter of time before he bags another.

Robertson has also become a vocal influence at the back, and his steely determination in addition to high quality performances has earned him the captaincy of Scotland.

Klopp has slowly built a team littered with captains – Robertson joins van Dijk, and Naby Keita in leading their country. This kind of mental strength is good for both club and country. Robertson and Keita are both outstanding players in (with all due respect) comparatively poor teams but the experience at international level stands them in good stead for their Liverpool duties. 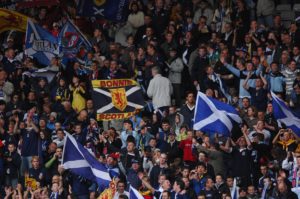 With all this being said, “Robbo” is now without question one of our most consistent performers. He attacks with menace and defends with controlled aggression and he is very much one of the elite left backs in the Premier League. If he had more pace he would probably be talked up as one of the best in Europe. Which I think he is, without question.

Some of our bargain basement buys in the past have been a colossal disappointment but at the price we got Robertson for, I really do think we’ve hit on one our best signings ever pound for pound. We’ve known he’s good since the turn of the year, but he’s backed it up this season too – and that is something that not all players go on to do.