Reds around the world: Liverpool players on international break

It's not just in the Premier League where Reds are dominating.

International break — the time in the football calendar when teammates disperse to the far corners of the globe to represent their countries, and club supporters all cross their fingers hoping that everyone comes back home in one piece.

There have been no major injuries so far (knock wood), and instead Reds have left a trail of success in their wake.

Our friends at Football Whispers have had a look around the international fixtures to see how Jurgen Klopp’s men have got on.

Best in Europe, for club and country

Two countries booked their place in the UEFA Nations League finals on Sunday, and both featured a Liverpool player in a key role.

With England, of course, it was Joe Gomez, with his consistently solid performances at centre-back during the season so far winning him a place in the starting line-up for the Three Lions.

But perhaps more important than his defensive duties (and he was arguably the better of the two centre-halves, over Manchester City’s John Stones) was his delivery with the ball in his hands.

Thomas Gronnemark’s tutelage has clearly had an effect, with Gomez’s arrowed throw leading to England’s equaliser. Maybe the FA should be subsidising what Liverpool are paying the Dane… 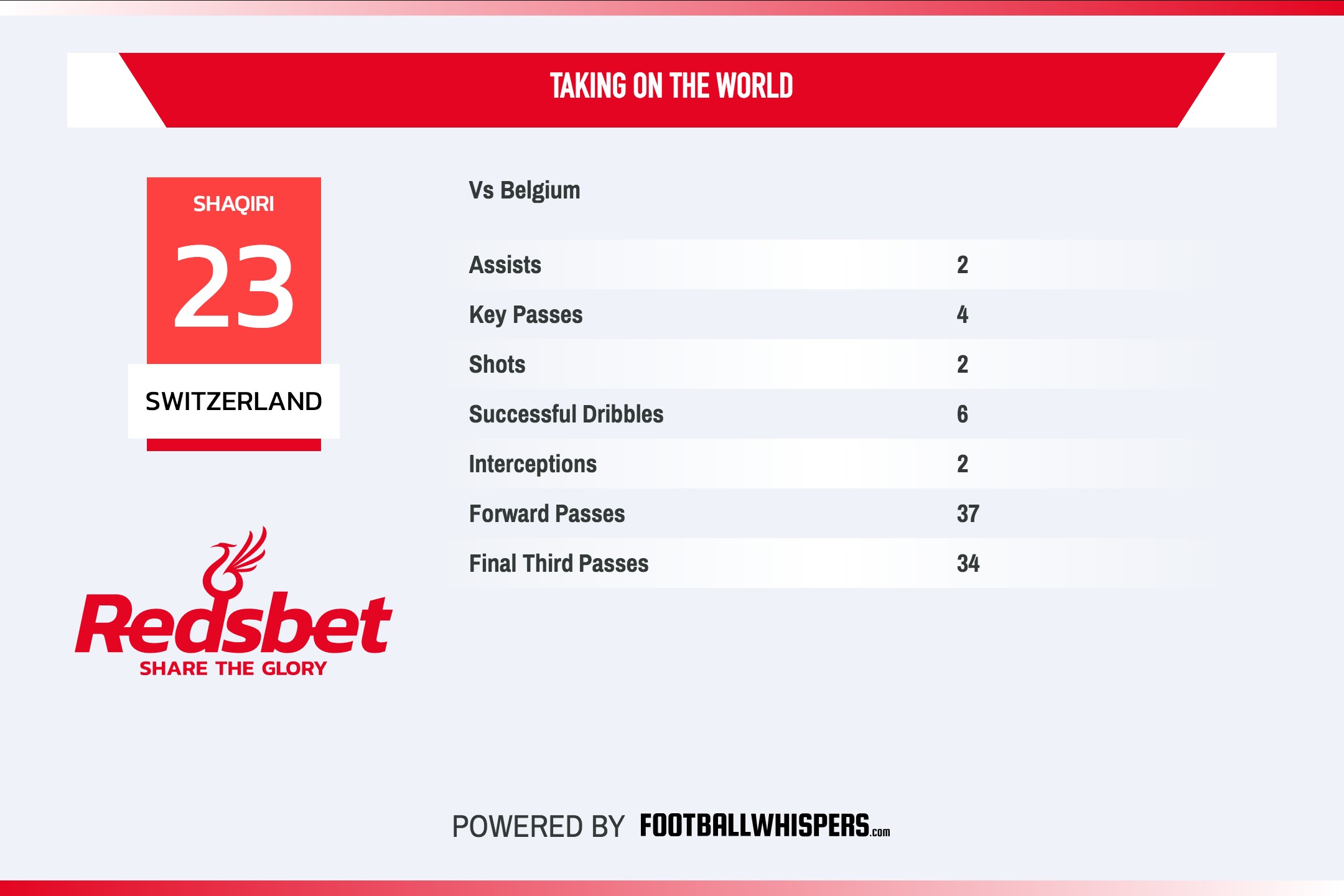 Meanwhile, Xherdan Shaqiri led Switzerland to an unexpected first place in their group, inspiring an amazing fight-back against World Cup semi-finalists Belgium. The former Stoke man set up his side’s equaliser at 2-2, as well as their fourth goal to put the game beyond doubt.

It wasn’t just in Europe that saw Reds reign supreme.

Mohamed Salah might not be in the lightning-hot form that he was in last season at club-level, but he’s keeping it up on the world stage. The Egyptian continued his run of scoring in international matches to eight in a row, scoring the winner as Egypt beat Tunisia 3-2 in African Cup of Nations qualifying.

Naby Keita will also be in Cameroon for the 2019 edition of the tournament after Guinea confirmed their place with a 1-1 draw against Ivory Coast, while Sadio Mane helped already-qualified Senegal to a 1-0 win over Equatorial Guinea.

Reds fans fear not, because AFCON has moved to a summer schedule for the 2019 tournament, rather than taking place in January and February as its traditionally done. The fact that Egypt, Senegal, and Guinea have qualified doesn’t mean that Klopp will have to work without Salah, Mane, and Keita for a few weeks in the New Year, despite what Danny Murphy might say.

As well as international victories to celebrate over the weekend, Mane and Salah were also announced as nominees for the BBC’s African Football of the Year award. The pair will probably be favourites over Kalidou Koulibaly (Napoli and Senegal), Mehdi Benatia (Juventus and Morocco), and Thomas Partey (Atletico Madrid and Ghana).

Leaders all over the world

Both Scotland and the Netherlands now have chances to top their Nations League groups if they win their matches against Israel and Germany respectively.

Elsewhere, Alisson and Roberto Firmino played 90 minutes in Brazil’s 1-0 win over Uruguay in a friendly at the Emirates stadium.

Nearly top of the league in England, the Reds are also topping leagues all around the world.