POINTS ON THE BOARD, PERFORMANCES ON THE WANE. WILL LIVERPOOL FIND THE RIGHT BALANCE?

Liverpool's defensive solidity has laid the foundations for their unbeaten start, but are their opponents still fearful of them? Dan Austin writes.

James Tarkowski stood still and stared towards his own goal with indignation. Ben Mee’s arms sank despondently to his sides. Joe Hart volleyed the post in fury.

After conceding a fifth goal in stoppage-time at the Etihad, Burnley were not simply beaten by Manchester City, they had the life squeezed out of them over the course of ninety minutes. They were besieged, bullied, and battered by bigger and better men than them.

Just a couple of hours after the match the Etihad, a lacklustre Liverpool were labouring to a beleaguered victory over a buoyant Huddersfield that was far from certain in the closing moments. The impotent Terriers were given no hope of a result before kick-off, but if Steve Mounié had managed to keep his late shot low instead of sending it swirling over the crossbar like a 50p flyaway, they would justifiably have earned themselves a point.

And yet, despite the discernible differences in their methods and efficacy, both Manchester City and Liverpool had three points added to their tally come the evening.

Both of their names sit at the top of the table. Both are capable of winning the Premier League title.

There has been a clear ploy to change the Reds’ style-of-play this season, of that there is no doubt. Whereas 2017/18 was based on rambunctious attacking and 10-20-minute bursts of overwhelming intensity designed to blow the opposition away, this campaign has seen a shift towards increased structure, solidity and assuredness in defence and midfield.

The dichotomy between Liverpool’s near flawless start to this domestic campaign — the Reds have never had more points, or conceded fewer goals, at this stage of a Premier League season — and their lack of fluency in most games ensures there lingers a sense that things are not quite running smoothly enough. Yes, Jurgen Klopp has ensured his team are now far more difficult to beat, but the possibility of a series of rampant victories is now a lot less likely.

That being said, the advantage Pep Guardiola’s side have over the Reds at the moment is based only on goal difference. It is crucial of course to keep in mind that in terms of results, Liverpool have matched the current Champions, and arguably the greatest Premier League team of all-time, in the opening quarter of the season. 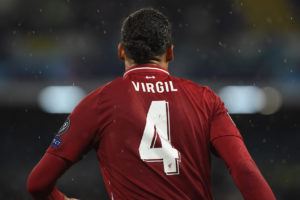 But what is happening now, is that Manchester City’s high performance level and huge goal return is making the rest of their season easier. Liverpool, meanwhile, are inadvertently making their future games slightly more difficult by winning unconvincingly.

The gap in goal difference is not the important thing, in-and-of-itself. What is crucial, though, is the psychology of it.

Footballers playing for the likes of Watford and Bournemouth will have watched the highlights of both games on television on Saturday night. They will have seen what Manchester City did to Burnley.

They will have seen the exhaustion and frustration written all over the away side’s faces. They will have foreseen themselves in their shoes in a few weeks’ or months’ time. They will be terrified.

And they will have watched the best bits from Huddersfield 0-1 Liverpool, and they won’t be so scared. They won’t be relishing their encounters with the Reds, of course, but nor will they quiver at the prospect. They will think that, if Huddersfield were so close to achieving a positive result, then maybe their team can go one better and take a point.

Teams will turn up to play Manchester City knowing that they don’t have a hope in hell; knowing that they are beaten before a ball is kicked. They will line-up against Liverpool expecting to lose, but with a small belief that as long as they’re in the game, they have a chance.

The longer Manchester City blitz their opponents while Liverpool narrowly defeat theirs, the more entrenched those beliefs will become. If Sergio Aguero and co. continue this veign of form for a little while longer, then by New Year the majority of their league games will be little more than a procession. They will have to spend less energy winning matches than Liverpool will.

Of course, it is not Liverpool’s fault that Manchester City are so strong, and so feared by the rest of the country. But if the Reds want to win the Premier League, this is what they need to contend with.

This is a Premier League where, as well as picking up three points, the way in which you win is increasingly important.