After City's win against Tottenham on Monday, Dan Thomas stresses the importance of coming out on top in the games against the 'big six'.

With Manchester City’s frustrating win at Tottenham on Monday night, it is increasingly clear that we are going to have to look after ourselves as we’re getting few favours elsewhere.

We can’t complain too much given that we comprehensively outplayed Spurs ourselves in September and left Wembley as 2-1 victors, the scoreline not a reflection of an excellent performance.

But as Erik Lamela scored a PAT a day too late for the NFL Wembley visit when he blazed over inside the last ten minutes, it just had a familiar feeling of City doing what they need to do. But with 75% of the league not of the requisite quality to help us out, we’re just going to have to take care of business by ourselves.

As a result of the compression of quality (or lack thereof) the mini league between the top six is as important as it ever has been before. More often than not, the team that wins that mini competition goes on to win the title. And if we’re to do that with City unbeaten after trips to Arsenal, Anfield and now Wembley, we are going to need to start winning some of these games. Starting with the trip to The Emirates on Saturday.

We’ve had a tough start to the season with no real respite from encounters with our title rivals. We have played Spurs, Chelsea and City already and we’re barely into November. With Arsenal next, that tough run has reinforced the point that we are a much tougher proposition.

We only got ten points out of a possible thirty last season from that top six mini league and if we fail to improve on that, then winning the league will be impossible.

With five points from a possible nine so far, you have to be happy with how we’ve set about making an improvement to our standing within this fictional and yet very important competition. It does seem to be a very “modern football” thing but the importance cannot be downplayed. If we can add at least another point to our tally at Arsenal, it will only leave us with Manchester United to deal with. They visit Anfield in December.

And after a run of three routine wins on the spin since the international break, the Arsenal game will provide a massive test to our title credentials. The Gunners have been on a remarkable run of form, and only a late Crystal Palace penalty at the weekend denied them a twelfth consecutive win in all competitions. 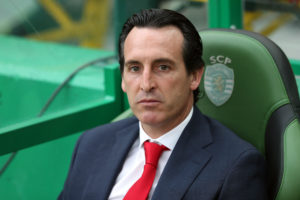 A trip to The Emirates is not as easy a prospect as it became in the fading embers of Arsene Wenger’s reign but their new manager Unai Emery (above) was the mastermind behind Sevilla’s remarkable run of form in the Europa League, which they won in three consecutive seasons under his management. Painfully, the third of these wins was against us at St Jakob’s Park in Basel. He has made his own stamp on Arsenal and we’ll need to be at our best to match the in-form Gunners.

Click here to see all our Arsenal v Liverpool specials

However, having seen them on multiple occasions this season there does look to be plenty for us to work with. They play three at the back with a high line and they insist on playing the ball out from the back.

Whilst our opposition in the last two games has been of dubious quality, I do think there are signs that our front three are beginning to regain their confidence and form. Roberto Firmino, Sadio Mané and Mo Salah in particular will all be licking their lips at the prospect of blitzing Arsenal and their slow build up play with a high press.

However, the Arsenal forward line has looked lethal in recent weeks and we will need to be mean defensively if we want to stop the hosts from scoring.

A clean sheet would give us an excellent chance of victory.

Voice From The Kop: Burnley (H)