Sadio Mane needs a break but, in Naby Keita, Jurgen Klopp has a talented player with a point to prove

Jurgen Klopp was not prepared to make the same mistake again.

Having turned down the chance to sign Sadio Mane while in charge at Borussia Dortmund, when the German was appointed Liverpool boss in October 2015, the player was at the forefront of his vision of the club’s future.

Klopp’s first transfer window in England was quiet. Marko Grujic was signed and immediately loaned back out to Red Star Belgrade while Steven Caulker was brought in on loan from Queens Park Rangers.

But, in his first summer at the helm, Klopp finally acquired the player he’d been tracking closely since the 2012 Olympics.

Mane cost the Reds £34million but it’s difficult to overstate how crucial he’s been during Klopp’s reign.

With 42 goals and 16 assists in 100 games, the Senegalese forward has proved one of the club’s most impactful signings in recent years, forming a devastating attacking trident with Mohamed Salah and Roberto Firmino.

This season, Mane’s continued his productive output with nine goals but the 26-year-old has in recent weeks shown signs of fatigue.

Despite sitting out the FA Cup defeat to Wolves, he looked tired in the 1-0 win over Brighton. Operating on the left of the three behind Salah in Klopp’s 4-2-3-1, Mane struggled to escape the attention of Martin Montoya, Brighton’s tenacious right-back, and was eventually hooked off for Naby Keita.

As the games continue to come thick and fast for the Reds, Klopp will undoubtedly entertain the idea of giving him a chance to fully recharge. After a blistering start to the season which saw Mane race to seven goals before November, he has cooled, with just two goals in his last 14 appearances (albeit in wins over Manchester United and Arsenal).

He has often struggled to complete 90 minutes too. By the time Liverpool visited Bournemouth in early December, Mane had finished the game in ten out of the Reds’ previous 11 outings – managing 89 minutes in the one he didn’t complete. 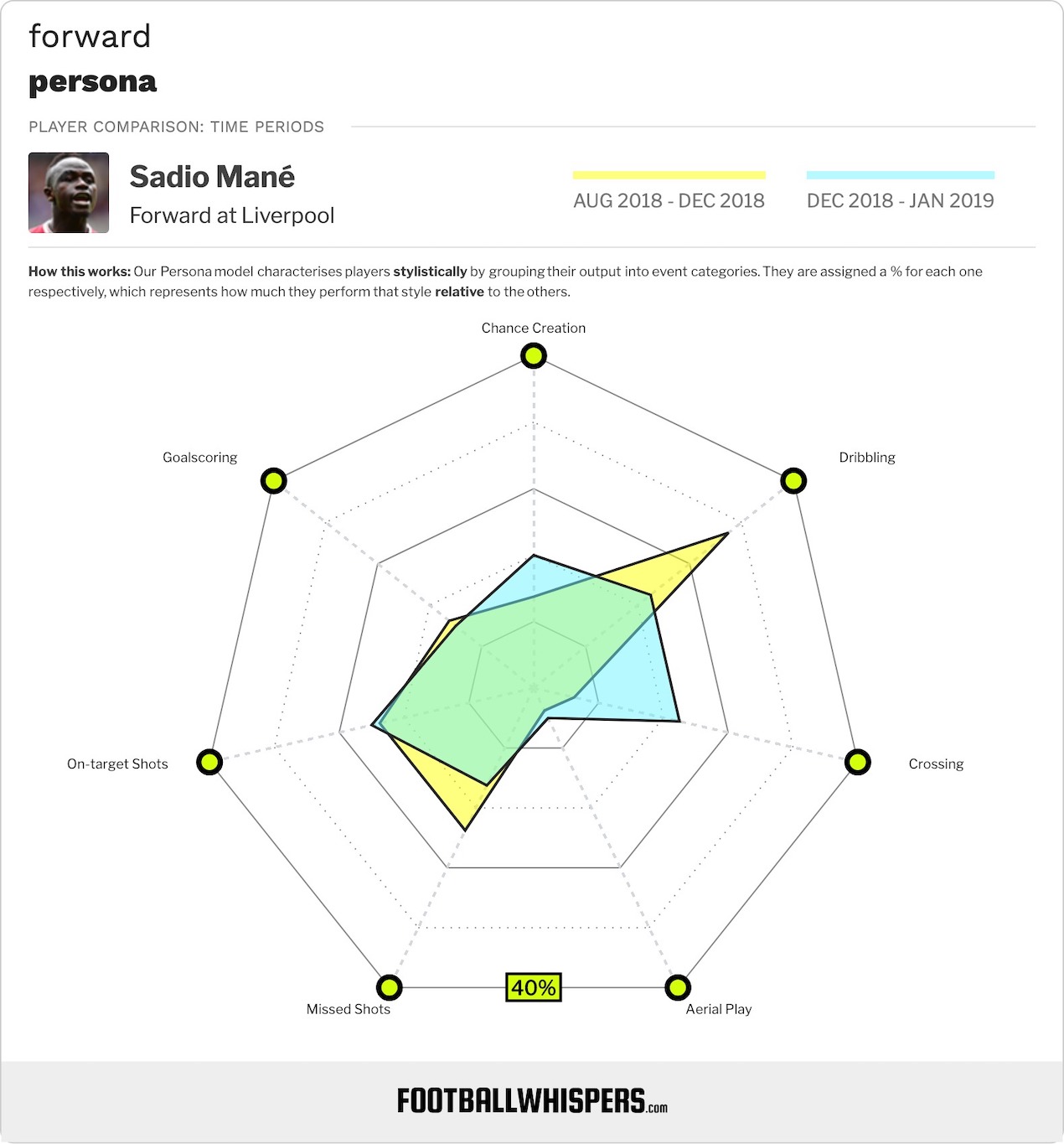 Klopp acted accordingly, recalling Xherdan Shaqiri to the line-up, but it seemingly hasn’t had the desired effect on Mane. Since the win at the Vitality Stadium, Mane has completed 90 minutes just twice in seven games.

The statistics reflect this slight dip. Whereas he was averaging 0.46 goals per 90 from the start of the campaign up until the Bournemouth game but 0.35 since.

As you can see from the Football Whispers player comparison persona above, Mane’s game in the last month has veered away from dribbling. Perhaps not feeling his sharpest, he has attempted a lot more crosses, which has contributed to increased chance creation.

The onus is on Klopp to manage his players’ fitness levels. With the Champions League last-16 tie against Bayern Munich to come in February, the coach may look to rest Mane in the relatively benign looking period leading up to that. Three of Liverpool’s next four games are at home to Crystal Palace, Leicester City and Bournemouth, all of which the Reds are expected to negotiate comfortably.

Liverpool are 1.74* to win the Premier League title

Of course, the question would be: to whom would Klopp turn to in Mane’s absence? If he continues to play a 4-2-3-1, the obvious replacement would be Naby Keita. The Guinean, who has so far struggled to assert himself at Anfield following his big-money move from RB Leipzig, can certainly operate there.

Keita has started just eight Premier League games but fits the profile as a creative, intelligent midfielder who thrives in between the lines and can prise open defences with his range of passing.

The 23-year-old lacks Mane’s electrifying burst across short distances but, if Klopp wants to keep that weapon in his armoury, he may look to incorporate Keita. With Alex Oxlade-Chamberlain still sidelined, Adam Lallana often absent and Curtis Jones not quite up to the required level yet, the £52million man looks to be Klopp’s best bet.