Lovren or Matip: who should partner Van Dijk with Gomez out?

With Joe Gomez out long-term, we break down which of Dejan Lovren and Joel Matip should partner Virgil van Dijk at the back

Liverpool have gone from looking impenetrable to looking like the team of yesteryear in the space of a few weeks.

The Reds are now shipping goals at an alarming rate, with people even now questioning Alisson between the sticks.

Jurgen Klopp’s side conceded eight goals between August and the end of 2018. Since the turn of the year just five Premier League matches have been played yet they’ve been breached on seven occasions.

Liverpool were running hot earlier on in the season and outperforming their expected goals against total by close to six goals.

Such form is difficult to sustain but the Reds managed it for the best part of half a season, meaning it is possible. The downturn in form, defensive at least, coincides with injuries to key players.

Joe Gomez and Virgil van Dijk formed a formidable partnership. The former was initially ruled out for up to six weeks after sustaining an injury against Burnley at the start of December. Now he’s had surgery and is expected to miss another six weeks, if recent reports are accurate.

Dejan Lovren and Joel Matip have shared defensive duties alongside the powerful Dutchman. Injuries have prevented Klopp from being able to name a consistent centre-back pairing. However, both are now fit, meaning the German tactician has a big decision to make: who should partner Van Dijk? 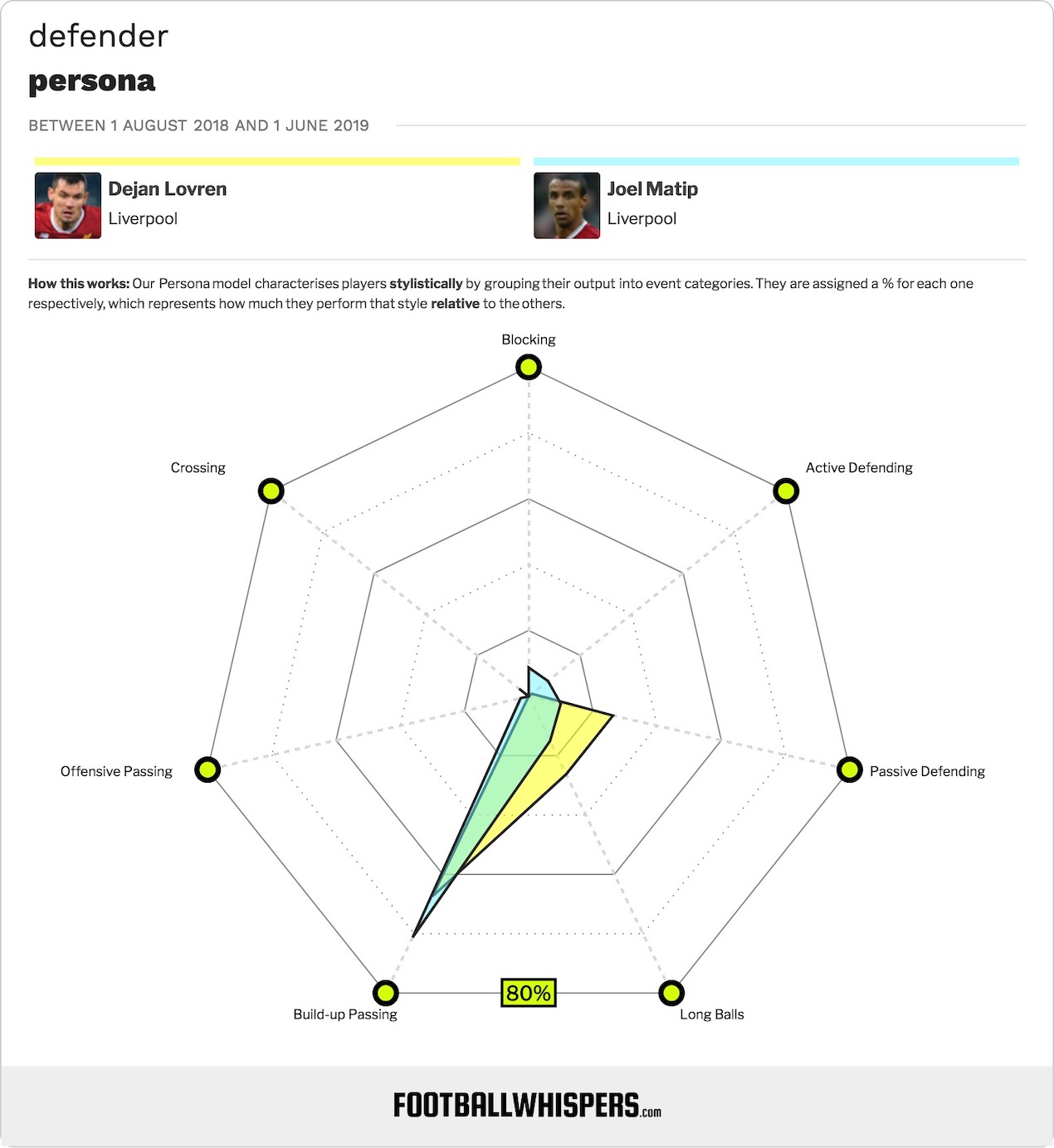 Mohamed Salah is 3.15 to score two or more goals vs Bournemouth*

As the above Football Whispers Player Persona shows, both centre-backs are similar. Both are comfortable on the ball, with the only real difference being that Lovren is characterised by his long balls and passive defending while Matip is more partial to blocking shots.

It’s no surprise to see that both defenders are similar stylistically. Liverpool have a certain way of playing, meaning there can’t be a drastic difference in playing style from player to player.

Perhaps the biggest difference between the two is their use of the ball. Whereas Matip likes to maraud into midfield, similar to the way Gomez does, Lovren is more of a Van Dijk type, always looking to play long balls from deeper areas. 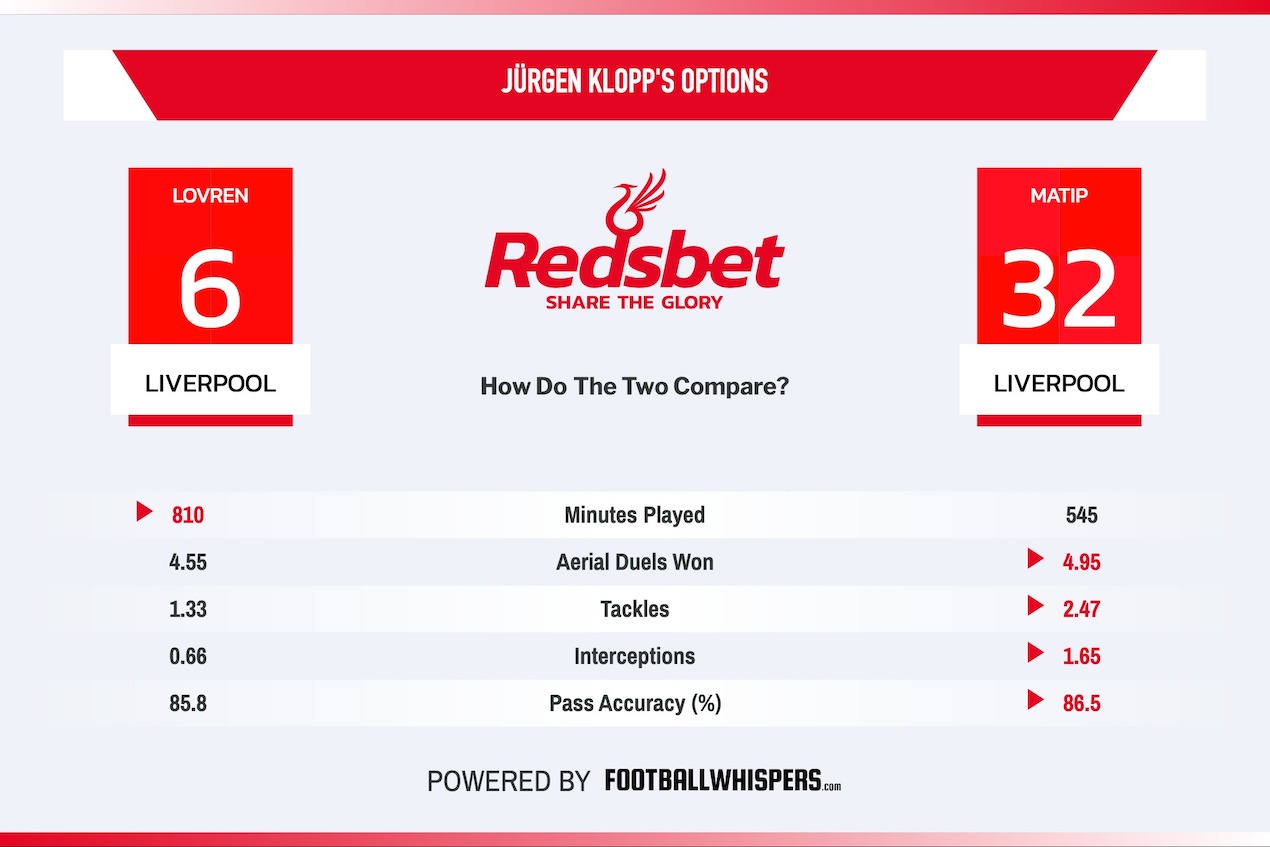 Liverpool are 3.60 to beat Bournemouth by three goals*

Statistically, there are a few surprises. Matip always appears to be passive in the air but he’s winning more aerial duels on a per 90-minute basis. He always completes more tackles, makes more interceptions and has a – slightly – better pass accuracy. The latter is an interesting one given the former Schalke man averages 20 more passes whenever he features.

The perception is that Lovren is an aggressive, front-foot defender, yet the stats, to an extent, don’t paint him as that. The only stat that suggests this is the percentage of passes forward one: of Matip’s 91.81 passes per 90, 30 per cent go forward, while the ex-Southampton defender plays 39 per cent of his 71.44 passes forward.

The opposition they’ve faced will no doubt influence these numbers, so that is worth looking into.

Matip has started just six times in the Premier League this season. He’s faced Southampton, Burnley, Bournemouth, Crystal Palace, Leicester City and West Ham United. Liverpool have averaged 2.3 points per game with him in their starting XI, 2.6 goals and 0.83 goals against.

On paper at least, these are all opponents the Reds should be beating. And from the tiny sample size, that average equates to 32 goals conceded over an entire season.

Lovren has just nine Premier League starts under his belt this term.

Interestingly, four of his nine matches have come against top-six rivals, yet his goals conceded-per-game number is better than Matip’s, coming in at 0.55. The Reds also picked up 2.44 points per game when their No.6 starts and score 2.5 goals per 90.

Again, it’s a small sample size but Liverpool’s stats when Lovren is in the team are better, and that’s with him facing superior opposition.

It’s hard to really separate the two and it could well be a horses-for-courses type of scenario for Klopp: If the Liverpool boss wants to get his team moving quicker then Lovren should get the nod; If he’s keen to have his team dominate possession and move the opposition around then Matip may well be his man.

If he wants a regular partner for Van Dijk while Gomez is out injured then he should plump for the Croatian.

He’s performed in bigger games for the Reds this term and has an existing relationship with the Dutch captain. The familiarity between the two could be priceless.