Mane 90 +4. Ahead of the Derby with The Ev on Sunday, we take a look back at five of our best Premier League wins at Goodison Park.

A flare is thrown onto the pitch as Liverpool's Sadio Mane celebrates scoring his side's first goal of the game during the Premier League match at Goodison Park, Liverpool.

Liverpool face one of the biggest games during the title run-in this Sunday as the Reds make the short trip to Goodison Park for a Merseyside derby showdown with Everton.

But while the Toffees are not to be underestimated, Liverpool boast an impressive record at their city rivals. Here, as the excitement builds ahead of Sunday, we look back on five of Liverpool’s best wins at Goodison Park.

In one of the most thrilling climaxes the Premier League has ever seen, Gary McAllister’s last-gasp free-kick clinched three points for Gerard Houllier’s Reds in the most dramatic fashion.

Enhanced Odds on Everton vs Liverpool

Emile Heskey, partnering Robbie Fowler up front, fired The Reds into an early lead only for Duncan Ferguson, who at that point had never been on the losing side in a Merseyside derby, to level just before half time.

Markus Babbel restored Liverpool’s lead before Fowler won and missed a penalty. Then, in a frenetic finish, Igor Biscan was sent off for a foul on David Unsworth, who went on to strike Everton’s equaliser from the spot seven minutes later having been brought down by Sami Hyypia.

But, deep into injury time, McAllister offered up some dead-ball brilliance, shaping up for a cross to the far post before deceiving Everton keeper Paul Gerrard with a wicked shot inside his right-hand post to seal a brilliant win.

Michael Owen inspired the Reds to a romping victory at the start of the 2003/04 campaign, scoring either side of half time in a comfortable win for Houllier’s men.

Harry Kewell sealed a thoroughly satisfying win with his first goal for the club.

Despite Everton possessing a threatening front two of Tomasz Radzinski and a 17-year-old Wayne Rooney, the Reds comfortably secured a fourth straight win at Goodison.

Owen showed his trademark clinical streak for his two goals before teeing up Kewell’s late strike.

Peter Crouch, Steven Gerrard and Djibril Cisse were on target to secure Pool’s ninth successive league win, giving fans a nice bonus Christmas present to round out a year when they became European champions.

Crouch and Gerrard struck inside the opening 17 minutes to put Rafa Benitez’s Reds in the ascendancy before James Beattie pulled one back before half time, the first time Pool had conceded in 761 minutes of football.

All our Everton vs Liverpool markets

In the game’s most controversial moment, the Toffees striker had earlier been denied a goal after the ball was deemed to have gone out of play before Tim Cahill’s cross.

A quickfire brace for Fernando Torres proved enough on this occasion as the Reds outclassed their hosts during a classy and accomplished display.

Torres sprung into life on the hour-mark, converting Robbie Keane’s cross before firing his second past Tim Howard three minutes later to wrap up the points. The Spaniard had the ball in the back of the net again a couple of minutes later but it was disallowed for Dirk Kuyt’s foul in the build-up.

It was as dominant as Liverpool have ever been at Goodison in the Premier League era, with Pepe Reina not even having to make a save.

David Moyes’ defence – comprised of Tony Hibbert, Phil Jagielka, Joseph Yobo and Joleon Lescott – adopted a bruising approach to dealing with Torres’ threat and, while the striker was, at times, visibly upset by the ferocity with which Everton tackled, he certainly had the last laugh. 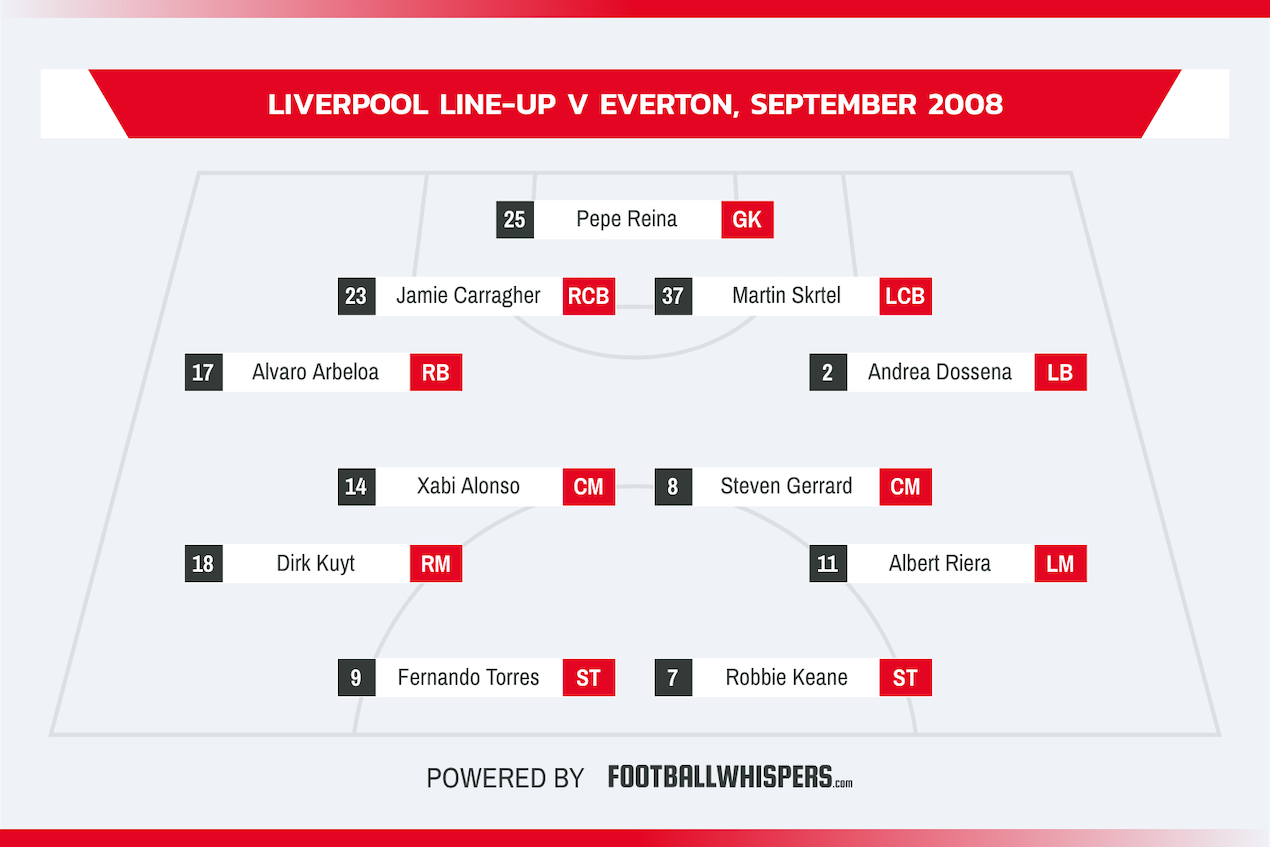 Sadio Mane has endured a difficult few weeks but if Jurgen Klopp wants to motivate him he should perhaps show the forward footage of Liverpool’s most recent triumph on the blue half of Merseyside.

Mane was the late matchwinner, reacting quickest after Daniel Sturridge’s shot rebounded back off the post to slot home in the 94th-minute.

It may not have been the most pulsating derby in recent memory but it was a big win for Klopp at the time. Reeling after a 4-3 defeat at Bournemouth and a home draw with West Ham, three points at Goodison was just what the doctor ordered.

The game did have a tempestuous moment, though, Ross Barkley escaping a red card after a horrific challenge on Jordan Henderson. But it failed to overshadow a thrilling finale for the Reds, who won a Premier League Merseyside derby via a stoppage-time goal for the fourth time.

Of course, they have now done it five times after Divock Origi’s late, late winner in the meeting at Anfield in December. Will it be six come Sunday? It doesn’t have to be a dramatic win; everyone associated with Liverpool will just be happy with three points, whatever way they come.