All the info and betting tips - with our enhanced odds - ahead of Liverpool's midweek game against Watford at Anfield in the Premier League. 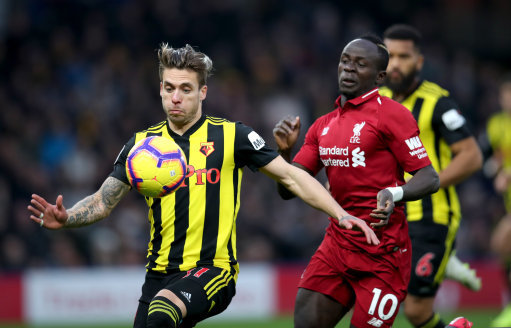 They say it’s best, after a stumble, to get back on the horse straight away.

After only mustering one shot on target against a limping Manchester United side, a midweek game against Watford could be exactly what’s needed for Jurgen Klopp’s men to bounce back.

The Reds may be without Roberto Firmino after he had to be substituted with an ankle injury, but Trent Alexander-Arnold is likely to be back after being rested against United.

The bad news for Liverpool is that the Reds are in one of their worst runs of league form, drawing four of the last five in all competitions, while the Hornets have only lost once in 2019.

However, they’ve had an easy run of it in the fixture schedule, and Javi Gracia’s side have a poor record against top six teams in the league this season.

After winning their first — against Tottenham back in early September — they’ve lost every one. Losing 2-1 is a familiar scoreline for them; four of their seven meetings against the top six have ended this way, including their last three in a row.

The Reds to win the next three Premier League matches, 2.75*
(vs Watford, Everton, and Burnley)

Interestingly, Liverpool haven’t scored exactly two goals in a game in over two months, since December 21 against Wolves. Goal-fests against Newcastle, Arsenal, and Crystal Palace aside, goals haven’t been easy to come by.

There have been five games since that 2-0 win over Wolves where the Reds have only scored once, as well as the recent back-to-back goalless draws against Bayern Munich and Manchester United.

With Firmino likely to be absent, more focus will be put on Mohamed Salah and Sadio Mane.

As you might expect given the whole team’s struggles in front of goal, Salah isn’t in his best goalscoring form. He’s only scored one in his last five appearances, although he’s Liverpool’s leader for chance quality in the league this calendar year, with 2.7 expected goals since January 1.

Mané’s is at completely the other side of the coin. Before the recent goalless draws, he was on a run of four back-to-back appearances in which he scored. However, he managed to score these four despite only having shots worth 1.87 expected goals this calendar year, so he’s been riding a wave that was always likely to hit the shore.

Fan Boost Liverpool special:
Salah to score, Liverpool to win, and both teams to score
WAS 3.75, NOW 4.50*

When will the goals go in?

Neither team is a particularly quick starter. The amount of goals each team scores in the opening 15 minutes is at 10.5 percent for Watford and just 8.8 per cent Liverpool, both of which are in the seven lowest shares of the league.

After that, both sides spread their goals pretty evenly, but the Hornets seem particularly dangerous just after the hour-mark. Nearly 29 percent of their goals have come between the 61st and 75th minutes, which is the second-highest proportion in the league for that time period. Beware of Gracia’s substitutes, it seems.

However, if there’s any period of the game in particular that Watford need to be wary, it’s the end. Almost 25 percent of Liverpool’s goals in the Premier League this season have come from the 76th minute onwards.

Fortunately for Klopp’s men, this is also when Watford are at their weakest. Over a third of the goals they’ve conceded have come in this part of the match.