Liverpool travel to Birkenhead for friendly

Liverpool are ferrying across the Mersey to Prenton Park for their second preseason game of their North West tour.

This weekend saw Liverpool thrash Chester 7-0 in the first preseason game of the summer. Tonight’s match the Reds are facing a bigger challenge.

Tranmere Rovers were promoted from the National League and will be playing in League Two this season (fourth-highest division in the English football league system). Tranmere won 4-0 against Dunfermline on Sunday in their first preseason game. A Liverpool win tonight will provide the perfect opening to a long summer of friendlies including a trip to the states, hopefully in preparation for a Premier League title challenge. Liverpool are 11/2 to win the Premier League next season.

PROMOTED! Tranmere are back in the football league after beating Boreham Wood 2-1 at Wembley! They played the whole game with ten men after having Liam Ridehalgh sent off after 48 seconds ⬆️🏆⚽️ #CapitalReports #SWA #TRFC pic.twitter.com/4cTyFAvEUR

It’s the third summer in a row Jurgen Klopp has brought his squad over to his neighbours in Birkenhead for a friendly game of football. Last summer it was an easy 4-0 win for the visitors, followed by a pitch invasion by excited youngsters. No, not the players.

Nabil Fekir to join Liverpool this summer is 5/4.

The four goals came from a Milner penalty, as well as a stunner from Grujic and a penalty from Woodburn. Spanish youngster Pedro Chirivella also made the scoresheet that night. That’s the beauty of the preseason, you get a glimpse of what could be and then it’s taken away from you. It’s both heartless and confusing. Anyway. The year before that, Danny Ings scored the game’s only goal.

Even though this week saw the return of Dutch players Gini Winjaldum and Virgil van Dijk they are not expected to take part in tonight’s meeting. Joel Matip and Danny Ings are not taking the trip across the river due to minor injuries, Ings’ reportedly suffering from severe blisters.

Harry Wilson impressed many on Saturday with a brace, and is looking to play his way into first team. He has a lot to prove and I personally don’t want to see him go out on another loan, although that is looking most likely at the moment. Another sterling performance at Prenton Park can be the start of an impressive preseason run that could still see him at Anfield at the start of the season.

Newcomers Fabinho and Naby Keita are likely to get some game time after they both featured in Chester at the weekend. And there were some promising signs from the high-profile signings, with Keita having an easier first day than the Brazilian. Coming from two seasons in RB Leipzig he’s familiar with Liverpool’s style of play, whereas Fabinho arriving from Monaco has to adapt to a completely new football philosophy.

Speaking after the match, Klopp made it clear they experienced some language barriers.

“[…] if you don’t speak the language, you already have a 100 bpm heartbeat when you listen to me! That’s how the first week is but it’s all good. Fabinho, today, was not too easy, it was not a good half and it was difficult to find his way in the game,” Klopp said at the post-match press conference.

But Fabinho, and especially his missus, seem to have settled in well on Merseyside, enjoying the rare weeks of sunshine and the usual limelight from overly-invested Reds on Twitter. Needless to say, everyone would always wish new signings well and a successful career in Liverpool. But the way the couple has seemed completely besotted with Liverpool life so far makes us extra hopeful they’re here to stay for the long run. We should sign Rebeca up too, to be fair, as she seems to have some decent skills.

Liverpool are playing Tranmere again and it is a perfect opportunity for forgotten heroes like Daniel Sturridge to keep convincing Klopp he is worthy of another season in the red shirt. Sturridge went on loan to West Brom the latter half of last season but was quickly haunted by his usual injury troubles. 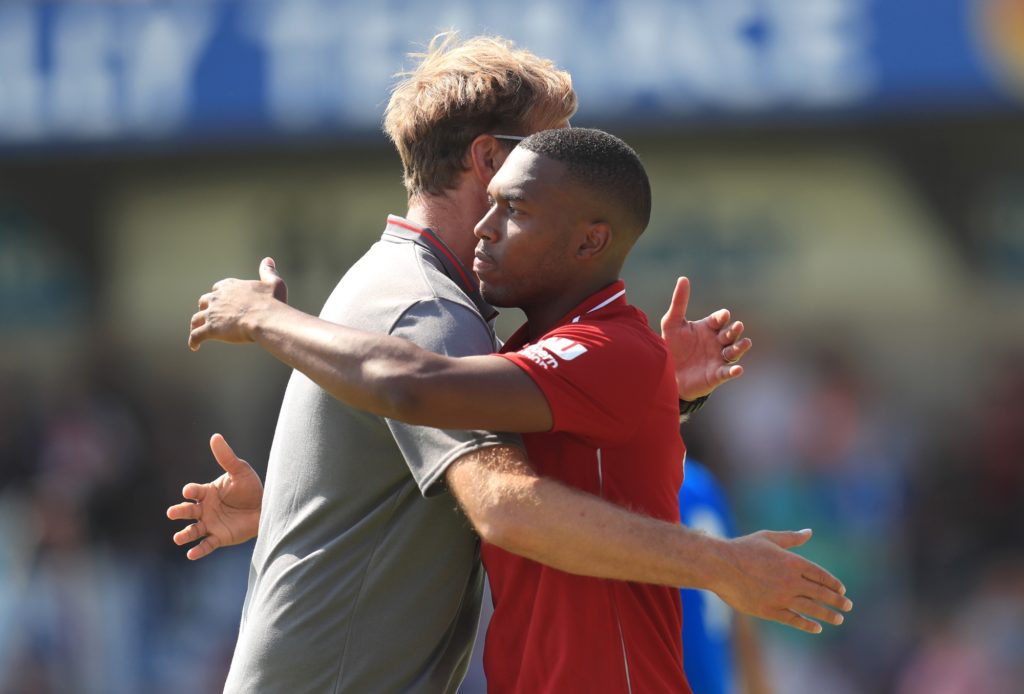 And as the trio up front dominated in Europe and was scoring for fun in the domestic league, most of us forgot about Sturridge. And we were ok with that. We were over him. But then we travelled to Chester and he flaunted his undeniable skills. He was the ex you had a boss but turbulent relationship with, and you’ve now spotted him/her six months on, looking fit af. Messing with your head. Making you miss what you had and asking questions of a possible future.

Adam Lallana is expected to feature tonight too. He is another player with lots to prove after a nightmare of a season where he was constantly set back by injuries. He did come on in the Champions League final, however his contribution was nothing exceptional and he needs to make strides to come back into the team this summer.

When the Reds make their way across the Mersey tonight, France will be playing Belgium in the World Cup semi-finals. But for the future of many Reds, the match at Prenton Park will be almost as important. Almost.