The transfer window is often dominated by the star names and the big hitters but it also presents an opportunity for teams to grab themselves a bargain. With players looking to stay in the Premier League, and others dissatisfied with being involved in a relegation scrap, shrewd clubs can find bargain deals.

Liverpool are no strangers to exploiting these situations. They’ve made full use of other club’s struggles in the past having signed Andrew Robertson from Hull City, Gini Wijnaldum from Newcastle United and Xherdan Shaqiri for relatively bargain fees.

If the Reds wanted to supplement their squad this summer then the clubs in and around the relegation zone could be the perfect hunting ground. With that in mind, we’ve taken a look at five potential bargain buys.

One of the most in-demand players last summer, Sessegnon’s debut season in the Premier League didn’t quite go as planned. With Fulham chopping and changing their manager, different systems being used and trying to bed in a number of summer signings, consistency isn’t something he’s been afforded. 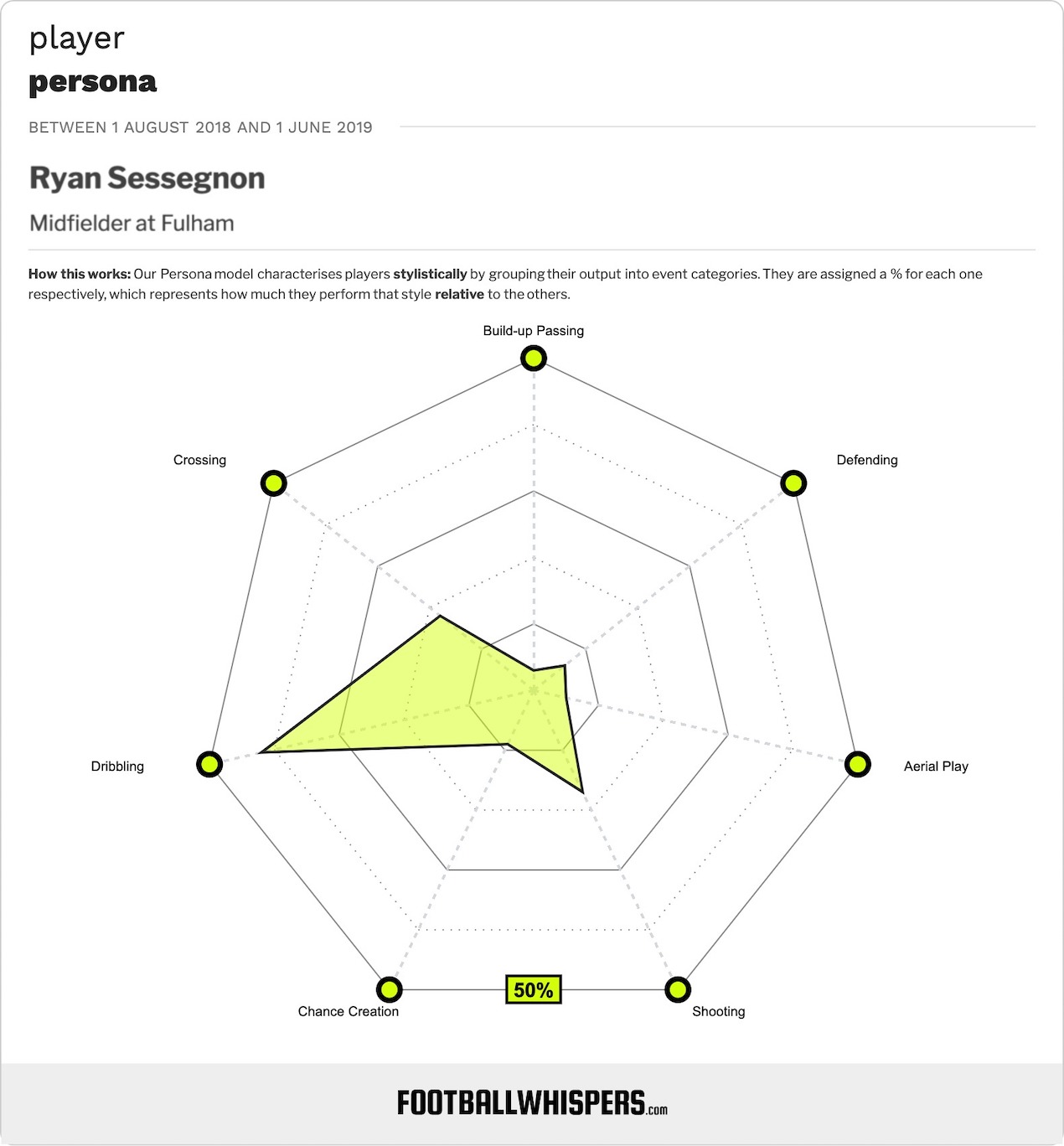 Liverpool are 3.40 to score over 4.5 goals vs Huddersfield*

Because of this, the free-scoring player fans witnessed in the Championship has been a shell of his former self. However, just because this season has been a disappointment doesn’t mean he won’t be a better player for it.

He now has Premier League experience, something very few 18-year-olds have, and is one year older and wiser. The talent is still there. He just needs a home to craft it away from being the main man. Anfield could be that place and Jurgen Klopp could be the manager to develop him into a world-class star.

Don’t expect Fulham to sell cheaply but the fee will be far less than the £50million rumoured last summer.

Another player who has struggled at Fulham due to the lack of consistency. Mitrovic would be a wildcard signing for Liverpool given he’s much more of a target man than any striker utilised by Klopp before.

But with the Reds now favouring a more direct approach at times, and with Trent Alexander-Arnold and Robertson providing the ammunition from wide areas, a brutish centre-forward could be the game-changer in certain matches.

He’d command a fairly decent fee, with £40million being rumoured, but Mitrovic is a reliable goal threat. His open-play expected goals average of 0.49 this season puts him in the top 15 of players aged 24 or under.

The same as Nicolas Pepe of Lille and not far behind Luka Jovic of Eintracht Frankfurt. The difference being both rumoured Liverpool transfer targets play for in-form sides battling at the top while Mitrovic is leading the line for a relegated team.

He gets into dangerous areas with great regularity and with better players around him he could be even more lethal.

The on-loan Real Betis man has been one of Cardiff’s star performers this season. Though he’s unlikely to force his way into Klopp’s starting XI, the 24-year-old midfielder would be a wildcard off the bench for the Reds from time to time.

He wouldn’t break the bank, with Real Betis already stocked, and he’d add some unpredictability to the Liverpool midfield. He makes runs beyond the final man, works the channels and has the quality to finish from distance. All of which would be a welcomed addition to most squads.

He also has a knack of performing in the big games. This season he’s netted on five occasions but three of those came in matches against Chelsea, Arsenal and Manchester United.

The 22-year-old was once tipped with a move to Manchester City as a potential heir to Fernandinho’s throne. Though his time with Brighton hasn’t been spectacular, he has shown glimpses of what he’s all about, and, unlike many other potential midfield signings, he’s already got experience of the Premier League.

On paper, he might not be a Klopp midfielder. But there’s no reason he couldn’t be crafted into a Fabinho understudy. With Jordan Henderson now playing more of a box-to-box role, James Milner not getting any younger and Wijnaldum capable of playing as a No.6 or as a No.8, signing someone to fill in for the Brazilian destroyer would be a wise move.

The former Lille man can break up play but the real test would be how he copes seeing a lot more of the ball playing in a Liverpool side that dominates possession. 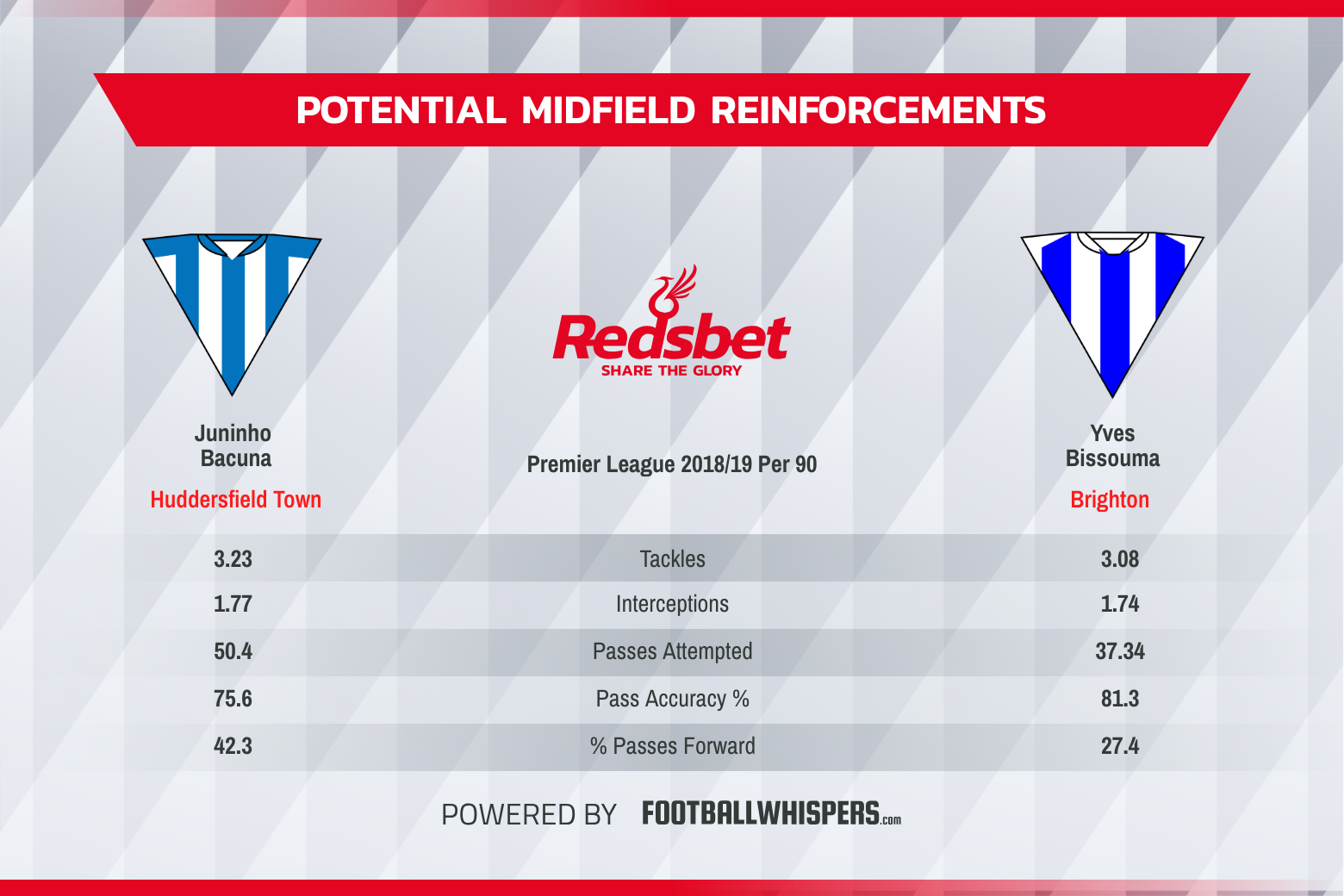 Liverpool are 3.80 to win the Premier League this season*

Another alternative for the midfield role is Bacuna. The Huddersfield fan has low-key been one of the team’s better performers this season despite having to fill different roles during his debut campaign with the Terriers.

Adept at playing in a single pivot or in a double pivot, this 21-year-old Dutchman has many strings to his bow. He’s an all-action midfielder capable of doing the dirty work, he averages 3.23 tackles and 1.77 interceptions on a per 90 minute basis, the real eye-opening stat is his use of the ball.

He sees a considerable amount of possession, attempting 50 passes per game, and his use of is it incisive, progressive and tidy. Despite taking risks, as highlighted by the fact 42.3 per cent of his passes go forward, he completes 75.6 per cent of his attempts.

He could well be Wijnaldum’s long-term heir for Liverpool.