There’s a real chance that Christian Pulisic joins the exclusive list of players perpetually linked with moves to Liverpool but who, sadly, fail to make the switch to Anfield.

Simao, Arda Turan and David Villa were the founding members and the trio were eventually joined by Mateo Kovacic.

There’s a strong case for Thomas Lemar to have a seat at the table but the next inductee has to be Pulisic, that is if he doesn’t sign for the Reds this summer. Our friends at Football Whispers take a look at the latest case of unreciprocated love.

The Borussia Dortmund wonderkid has been on Liverpool’s radar for quite some time, and he has a history with Jurgen Klopp. The poster boy for American soccer joined the Bundesliga outfit in February 2015 and it was Klopp who called him up to train with the first-team at the Signal Iduna Park.

However, It was Klopp’s successor, Thomas Tuchel, who gave the 19-year-old his debut during the 2015/16 season. The Reds made their first move in the summer of 2016. An initial £11million bid was turned down and, despite many expecting a second official bid, interest seemed to wane. After all, it was a fairly substantial amount for someone who was just 17 at the time.

Then, in April 2017, reports emerged claiming it was a straight shootout between Liverpool and Bayern Munich for Pulisic’s signature. The Bavarian juggernaut wanted to raid their rivals yet again having successfully convinced Mario Gotze, Robert Lewandowski and Mats Hummels to trade the Westfalenstadion for the Allianz Arena. 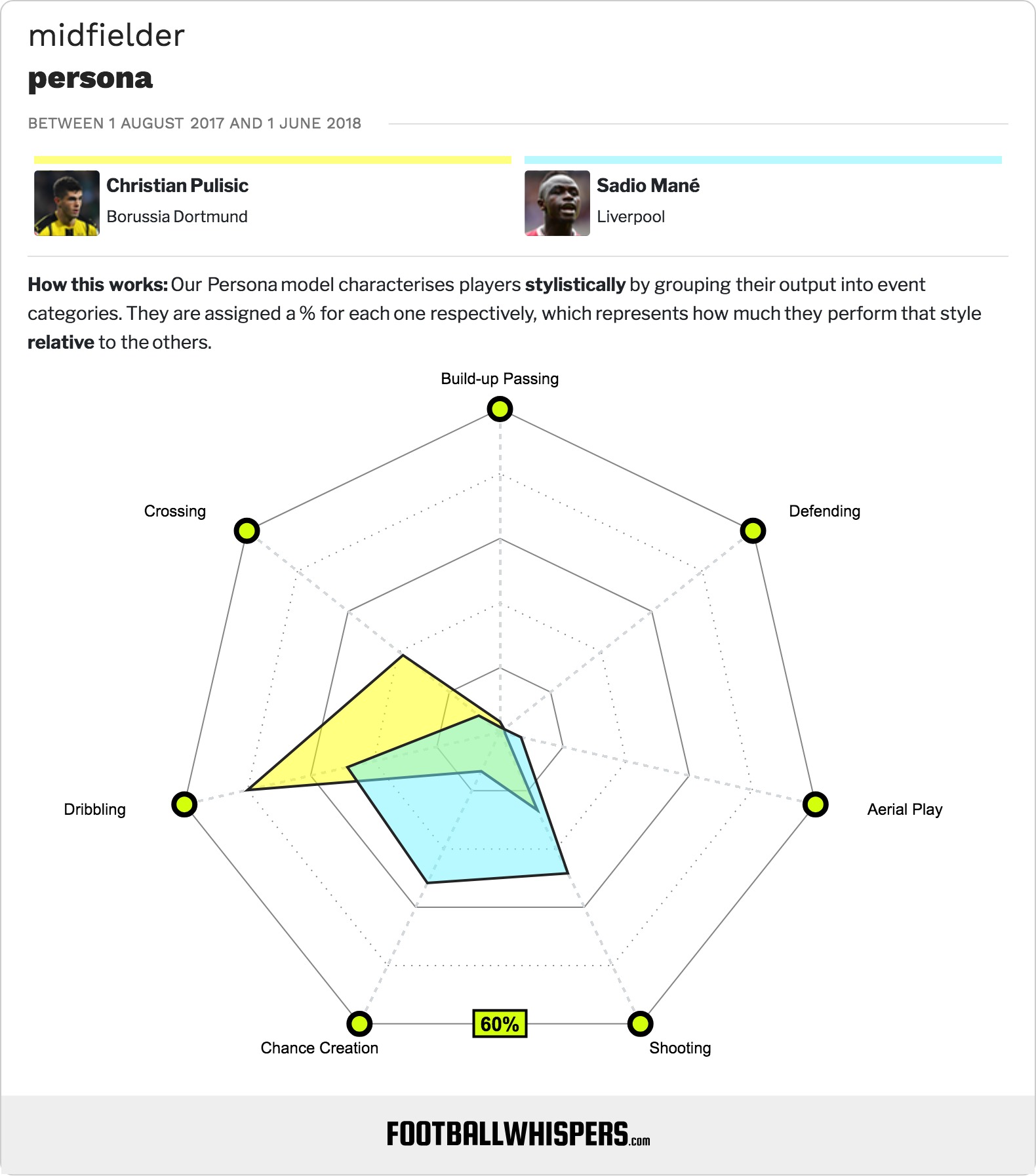 A bid in the region of £30million was believed to be enough to pry him away from Dortmund but the Neymar deal changed the landscape completely. Ousmane Dembele forced a move to Barcelona after going on strike but in the process became the second-most expensive player in history. BVB had a payday and could resist any Pulisic offers.

In January 2018, just days after Liverpool sold Philippe Coutinho to Barcelona, respected Bundesliga journalist Raphael Honigstein appeared on the Totally Football Show podcast and revealed that it was his belief the Reds would break the bank to sign Pulisic in the summer: “Christian Pulisic is a player Liverpool have tried to sign before. I’d be very surprised if they didn’t come in for him heavily next summer,” he said.

Like clockwork, the season came to an end and links to the talented winger began to re-emerge. The Daily Mirror claimed Liverpool were prepared to battle it out with Manchester United, Tottenham Hotspur, Arsenal, Chelsea and Bayern Munich for the £50million-rated attacker.

Encouraged by the fact Pulisic only has two years left on his current deal, there’s a belief Dortmund may cash in while his stock is high and the player fanned those flames recently.

In an exclusive interview with NBC Sports, the 19-year-old revealed playing in the Premier League was a dream of his: “Of course, the Premier League is a great league. It was a dream to play there when I was younger but I’m under contract with Dortmund and I’m just working hard there at the moment. I’m very focused on the here and the now. But you never know what can happen with professional sports but I am just focused on what I am doing right now.”

Many believe Pulisic is going to be the first American football player to develop into a megastar on and off the pitch. While the Bundesliga is the perfect environment to do the former, a move to the Premier League is needed if he’s to achieve the latter.

It may seem detrimental to his development but the Pennsylvania-born teenager needs to be put under intense pressure and scrutiny from a young age if he’s to be moulded into a diamond. He isn’t coasting at Dortmund but he’s not being pushed because the team are in transition, again.

It’s no coincidence he’s shone brightest on the biggest stage of them all. 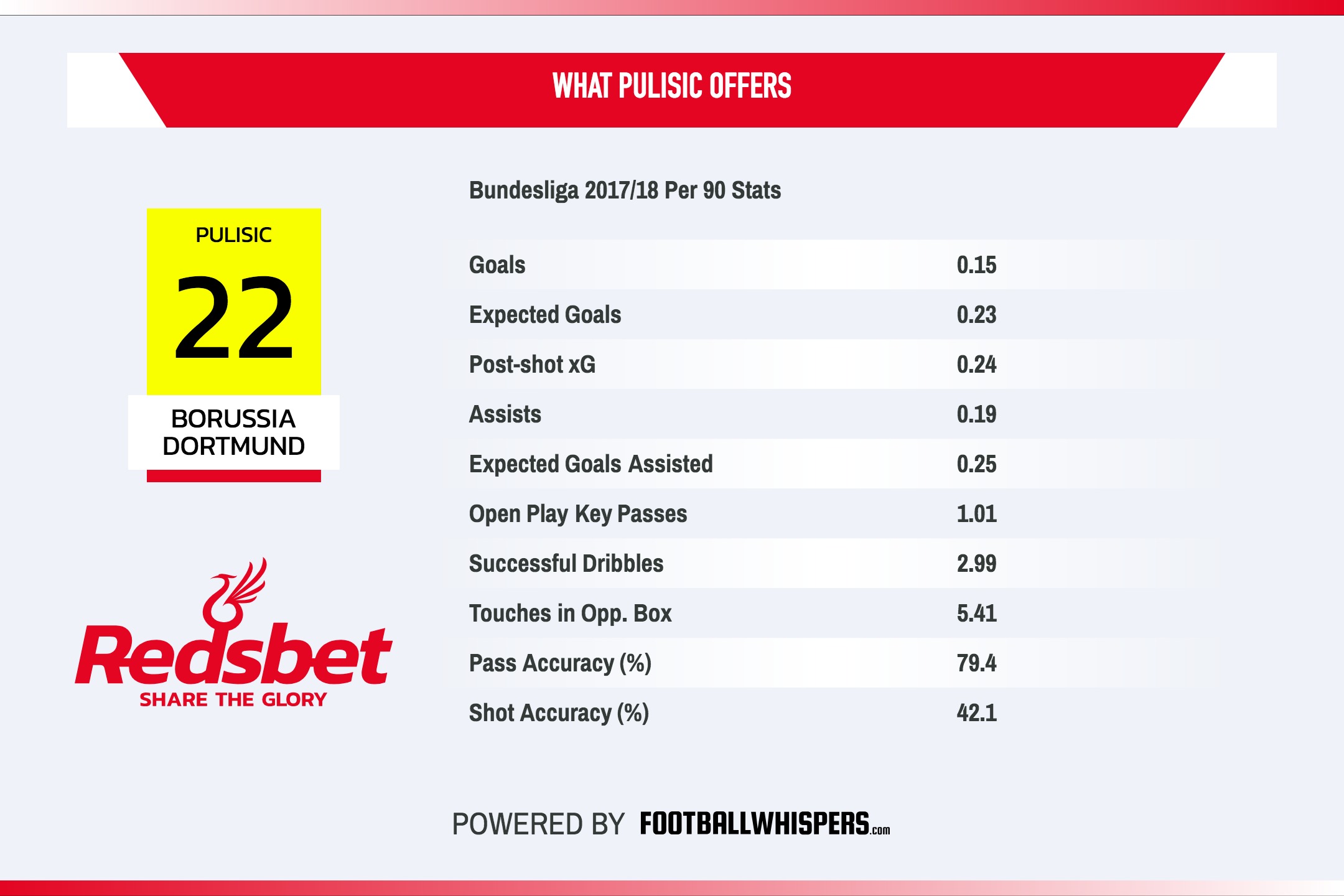 Terrorising Bundesliga defences with his speed and low centre of gravity was one thing, but doing it in Champions League was another. Dortmund’s youngest ever player in the competition, Pulisic changed the game when he came on as a second-half substitute against Real Madrid in 2016.

Trailing 2-1 to the reigning champions, Pulisic weaved his way around Danilo before ghosting past Toni Kroos and clipping a ball towards Andre Schurrle, who fired into the roof of the net to make it 2-2.

It was his moment but not the only one he had throughout the season. He was involved in a goal every 138 minutes during the 2016/17 campaign. Not bad at all for an 18-year-old.

His average throughout the 2017/18 season was a goal or an assist every 256 minutes, but it’s worth noting the team sold star players, tweaked the system they used and swapped managers. Context is necessary to explain his downturn in output.

Liverpool would give him an ideal environment to flourish. He’d be playing in high-profile matches throughout the season but under a manager who knows how to nurture talents. On paper at least, it’s an ideal marriage.

He’s a throwback to the wingers of the 1990s and it’s exactly what Liverpool are missing from their attacking arsenal. By nature, he’s aggressive whenever he picks up the ball. He’s always looking to isolate the opposition and beat a man – his 2.99 successful dribbles per 90 minutes is a testament to that.

The American is able to travel at speed in possession, a bit like Eden Hazard. It’s as though the ball is glued to his feet and the way he manipulates it is mesmerising.

Mohamed Salah and Sadio Mane like to cut inside but Pulisic isn’t afraid to go on the outside and hit the byline before pulling the ball back into a dangerous area. He could be viewed as the missing piece of Klopp’s attacking puzzle and if there’s a possibility of landing him this summer, with the Reds in a position of power, then every attempt should be made.

It’s not now or never, with age being on Pulisic’s side, but missing out for the third time would be one step closer to the youngster being admitting into the ‘what might have been’ club.