Now, the big day is upon us. Gary and I had food and a pint and took our flags up to Dinamo Kiev’s ground, before heading up to the mass Red congregation at Shevchenko Park.

We got split up, both our fault for getting separated by buses that lined Kiev’s main drag, but no matter – I wanted to meet my sister Gill and her fanatical Red fella, Lee. (Alright, yer wool)

The Park scenes took me back to Paris and Istanbul; littered with an energy pierced only by the sound of crushed cans and enough broken glass to mount an aggressive takeover of Safestyle UK. The main stage had rocked earlier to the La’s and Cast’s John Power but was now under the same threat of collapse as the one in that Istanbul car park in May 2005. Hundreds of Reds, illuminated by flares and scorching sunshine, sang our songs and bounced like Fernando Torres was again Liverpool’s number 9.

Still cant get over the scenes from the weekend and particularly this from Saturday. Hard to describe what its like to experience times like these. Nothing can take away what this felt like. And still does. pic.twitter.com/Zr8fxbOmSi

I saw my loyal mate, Andy Heaton, the splendid beards of the Milburn brothers from Tuebrook, they in tow with Lawrence to name just a few. Nearly everyone I know and care about was there. Hugs were ten-a-penny as the booze flowed thousands of miles from our respective homes ahead of the European Cup Final.

Ever mindful of Sheffield in 1989, we headed downhill towards the Olimpinski with a couple of hours to spare. We were on the stadium’s doorstep with ages to spare. Time enough to remount the flags, this time mine – with a single European Cup – twinned and hung with my sisters Birkey Hotel, Crosby banner, which depicts all five so far. In my life, I’ve loved them all, it reads. I told my mate, Paul Cope to look – one plus five = six. This one, like the other is written in the stars, or so we dreamed. 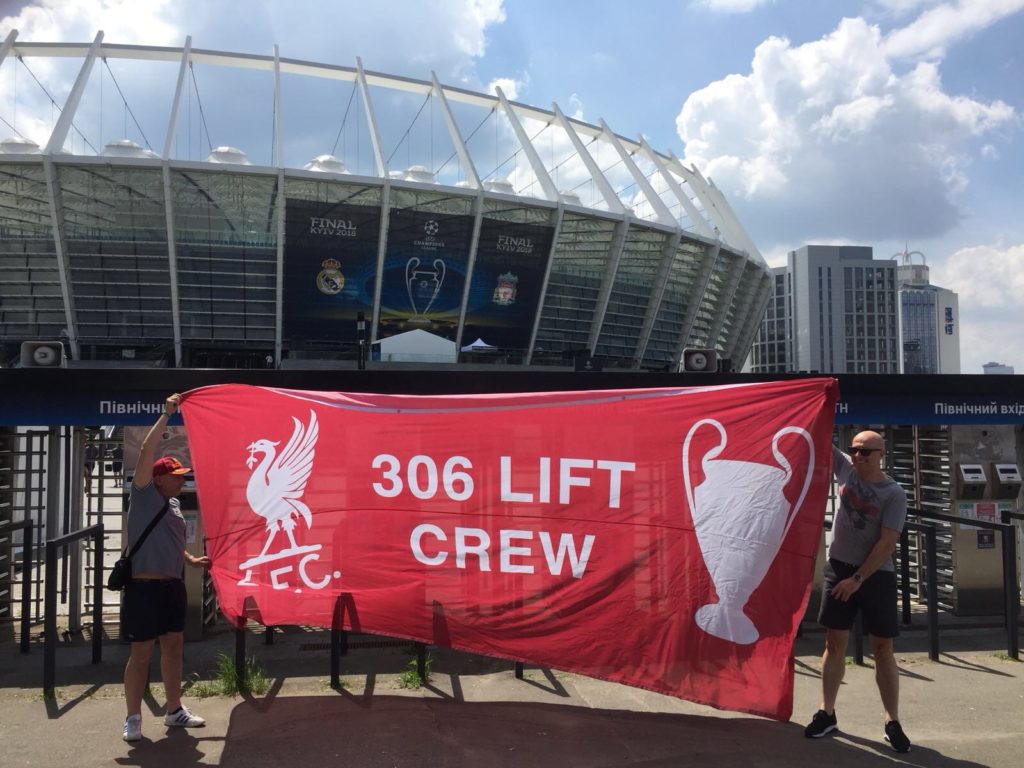 One of our mates from the Kop’s row 60 had his ticket snatched away at the turnstile. Loads rallied round but what could we do? Eventually I went in ten minutes before kick-off to the strains of a deafening YNWA. I suspect and hope Tizzer got in somehow too. I legged it up to my vantage from the UEFA and Media zones on half-way and hung the 306 banner from on high. We were flaming everywhere; outnumbering Madrilenos by 3-1. Oh, the irony, the sadness and the hurt.

On the game itself, I’ve not much to say than that we didn’t do ourselves justice. Jurgen and his lads deserve great credit for taking us to Hoffenheim and Maribor, Moscow and Seville, and Porto, Manchester and Rome – and here of course to the Final. Danke, Jurgen.

Liverpool to win the Champions League 2019 is currently at 21/2 with Redsbet.

But, and this sounds harsh but is true – Loris Karius is a joke of a goalkeeper. “There you go Karim (Benzema), here’s the European Cup for you on a plate.”

His obsession with quick release of the ball was Karius’s downfall. Anyway, his default move is to scurry to the edge of his box and halt; seeing nothing – with zero peripheral or forward vision. Sorry, Loris, you might be handsome but du bist Scheisse.

Poor Mo Salah our ket-wigged Egyptian King among men. Justifiable tears as you came off. Cry all you want mate and thank you for everything; for all the goals and joy you brought us this season.

Where was our cover for this belated, cruel eventuality? Our cover was sitting in a box containing £145M under either John Henry’s Boston bed or on Jurgen Klopp’s Formby sideboard. That conservatism cost us a sixth European Cup, Roberto Firmino, the galloping Brazilian was also slowed to a trot by an unnecessary burden of too many games and no respite. Only Sadio Mane, who got a rest when Phil Coutinho was around, shone for us in the final.

Anyway, it’s done now. We aim for Madrid next year. This one wasn’t to be but 2019 might be. We want vengeance; not against Benzema, Bale or even General Franco. Our revenge will be against the cruel hand of fate and heard in the laughter of our children.

Since Saturday, Kyiv has been a paradise. Its classic architecture, huge River, lads and girls; men and women, fighting spirit, glamour, sunshine and generosity. I’m so sad we can’t add the word “Kyiv” to the names of the cities already adorning our famous flags and banners. Maybe one day we will, still. In the meantime, we’ll be back – to holiday, or to face Dinamo or Shakhtar.

We love you, Liverpool, we do. But just at this moment, not as much as we love Kyiv – from its bent cops to its heart of gold. Sound familiar? The friendships we struck will last a lifetime and that is more than any silver cup – even that one – can ever mean.

It is finally time to go home now, with a tear in my eye. Not because we lost but because we will miss you all.

The Reds and the Fab Four