LACKLUSTRE LIVERPOOL SHOULD BE WORRIED BY RED STAR LOSS

After starting the season in a manner which was authoritative without ever being exhilarating, Liverpool now find themselves in the midst of a deflating, muddy run of both performances and results which threatens to stall their progress across multiple competitions.

If the outings against the likes of Huddersfield and Cardiff were mildly perturbing but ultimately successful, then the evident failure of this week’s trip to Serbia should be an alarming sign to the Reds’ players and coaching staff.

What was most troubling about Liverpool’s languid loss was their reaction after going 2-0 down. A side containing some of the most-talented attackers in world football with a trio of highly-experienced midfielders behind them was reduced to attempting apathetic shots from long distance, floating directionless crosses into the densely-populated penalty area, and waiting for something to change without ever taking charge of the situation themselves.

Liverpool were completely lacking in ingenuity and creativity, and not one player was capable of dragging his teammates out of the despondency.

Blame has been cast upon the likes of Joel Matip and Adam Lallana, who now appear to have been left behind by the on-pitch progress Liverpool have made in the past couple of years. Jurgen Klopp made an error in thinking that those two players were reliable enough to help secure victory on Tuesday night. 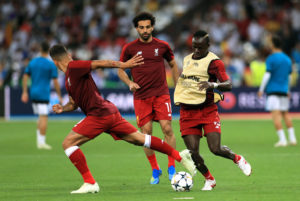 But more problematic than the displays of those two players was the fact that Sadio Mané, Mohamed Salah, and Roberto Firmino (for 45 minutes) looked completely shorn of all ability, intelligence, and confidence. The electrifying pace, relentless intensity and almost telepathic understanding that became their trademark in the last campaign were nowhere to be found, and in truth have seemed relatively scarce since August.

For a few months supporters have been waiting for the forwards to ‘click’, to find the rhythm that made them the most feared footballers on the planet in the first half of 2018. Flashes of their most premium skill have been witnessed but not at the kind of frequency which is expected of them.

The manager has certainly made a shift away from last season’s rambunctious style-of-play in favour of increased solidity. That seems like a sensible move. But this is now quite a confusing Liverpool side. It is becoming increasingly hard to define what its attacking blueprint is.

The Red Star defeat is clearly Liverpool’s worst result and performance of the season.

It could be written off as the kind of vapid outing that can happen to any team on occasion, yet the Reds’ performance level as a whole has dipped significantly since late September.

While score-lines remained generally positive, it was difficult to ascertain exactly how much importance to place on the correlation between the standings and the showings.

Now that a poor performance has been matched by an atrocious result, it feels pressing that Liverpool not only remedy the situation with wins, but that they begin to produce the kinds of displays which spread self-belief and allow momentum to be harnessed. If they do that, then they will remain in the hunt for success both domestically and in Europe.

It is important to remember that the Reds’ current troubles only feel so frustrating because of the frankly ridiculous quality of opposition against which they are challenging. Manchester City have been almost faultless in the league so far, and a Champions League draw which provides Paris Saint-Germain and Napoli as opposition allows very little room for error.

If this were a ‘normal’ season, where probably the greatest Premier League team of all-time wasn’t knocking around at the top of the table, and Liverpool hadn’t been given their toughest European group stage draw ever, then a few dropped points and mediocre matches would be easier to accept.

A Fulham side which has conceded more goals at this stage of the season than any other team in Premier League history should provide the perfect opposition against which to begin the recovery at Anfield on Sunday.

It is important now that Liverpool remember that they are a very good football team, and that they start playing like one too.