A number of injuries have exhausted Jurgen Klopp's options in midfield leading to a below-par performance from Fabinho at Arsenal.

Despite an extensive midfield revamp in the summer, the lack of options in midfield is causing Jurgen Klopp a headache at the moment.

With Naby Keita and Jordan Henderson out with hamstring injuries, the scope for change in the engine room has deteriorated significantly and it is beginning to take a toll on the team. A very hard thing to comprehend given we are still undefeated and were eight minutes away from beating Arsenal, but hear me out.

It would seem that Fabinho is nowhere near ready to play a Premier League match at that level of intensity. The Brazilian has played well in thumping wins over Red Star Belgrade and Cardiff City but he was well off the pace in this match. He will probably play and play well in the return Champions League match and in Sunday’s game with Fulham at Anfield, but this was not his evening.

Whilst not actively targeting him, Arsenal were far too quick for Fabinho and he was often seen running diagonally as the play passed him by.

A lot was made before the game about the hosts being vulnerable but if that’s the case, we didn’t play well enough to truly test them. With our passing and ball retention very poor, we spent much of the game on the back foot.

And this isn’t just the fault of Fabinho, I didn’t think any of our midfield three played especially well. Goal aside, it wasn’t James Milner’s day and he looked gassed as the game came to a close. The Brazilian stood out as being particularly off the pace but it wasn’t a great day for a few of our players – I think Trent Alexander-Arnold has left all of his energy in Russia during the summer’s World Cup. 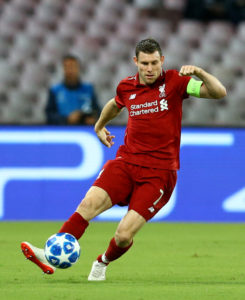 But Klopp has his hands tied currently – Keita and Henderson are injured (thankfully neither seriously, both have a chance for the Fulham game) and Adam Lallana is nowhere near approaching fit. So whilst it was an infuriating experience watching our midfield get bypassed time after time, that was really the midfield we had to make do with.

Lallana is capable of stepping into the midfield three but he is rusty and I am not so sure it would have been any different to the runaround that Fabinho experienced. The former Southampton captain is an asset when he’s fully fit but The Emirates was not the time or place for him. With Xherdan Shaqiri out of the trip to Belgrade for what is effectively political reasons, Lallana is the perfect candidate to start as the creative spark in midfield.

Keita and Henderson can’t get back quickly enough. With a manic run of games to come after the (sigh) international break, we need all the personnel we can get. And at this point, we need to be telling Guinea to take a running jump and make Keita unavailable. The sight of him being carried off the field by his teammates because no stretcher was available still boils my blood .

The same with Henderson really – given that England are bringing relics out of international retirement, we should be pushing back firmly on that one and making sure that Henderson is well rested as it is clearly akin to a testimonial.

I have praised Klopp for his substitutions a lot this season and as he has built a squad that is tailored to his needs, his changes feel a lot more effective. I’m sure it was infuriating him that he could make no real changes to the midfield three.

A draw at Arsenal isn’t a bad result – we could easily have lost with the amount of ball we squandered, but we hit the woodwork on multiple occasions and had a perfectly good goal ruled out.

A point apiece was the fair result but in this day and age of Manchester City’s financially doped footballing juggernaut, come May it might not be enough. But all we can do is take care of our own business and to still be unbeaten in November with the away games we’ve had is a very good achievement.

And with midfield reinforcements to come in the weeks ahead, you’d hope we can extend that unbeaten run for a good while yet.