Guinean promises to be worth the wait

There are some football players who live off of their reputation. They are hyped beyond belief but, barring those fleeting moments of magic perfect for a YouTube compilation, they regularly underwhelm and disappoint.

And then there’s Naby Deco Keita.

Liverpool fans have been waiting patiently for the 23-year-old to arrive on Merseyside after the Reds agreed a fee with RB Leipzig for their dynamic midfielder just before the 2017 summer window closed. The wait is finally over. The Guinea international was in Liverpool over the weekend and it’s now just days as opposed to weeks until he’s officially a part of Jurgen Klopp’s Reds revolution.

A £52million price tag alone is enough to weigh heavy around the midfielder’s neck. But Keita arrives towing an 12 months of anticipation and intrigue. Players won’t admit it, often rubbishing the impact a fee has on their performances, but there’s no doubting the fact it plays a part in how they’re judged.

Some may even say it’s already had an impact on the RB Leipzig man. He was criticised for his performances in the Bundesliga last term on more than one occasion and his attitude was called into question after a number of red cards. But that was just an easy narrative to latch onto.

Get Nabil Fekir to join Liverpool at 21/20 with Redsbet

RBL’s disappointing season had a lot to do with the team having to cope with the demands of playing their first-ever season of European football. It was a transitional season for the 2016/17 Bundesliga runners-up and Keita wasn’t the only player to struggle. Liverpool transfer target Timo Werner scored eight goals fewer in the German top-flight while Emil Forsberg, subject of Arsenal transfer rumours, managed just two assists, down from the 19 he supplied the season prior.

Ralph Hasenhuttl rotated his starting XI to keep key players fresh for European fixtures while still trying to ensure his developing side were competitive domestically. 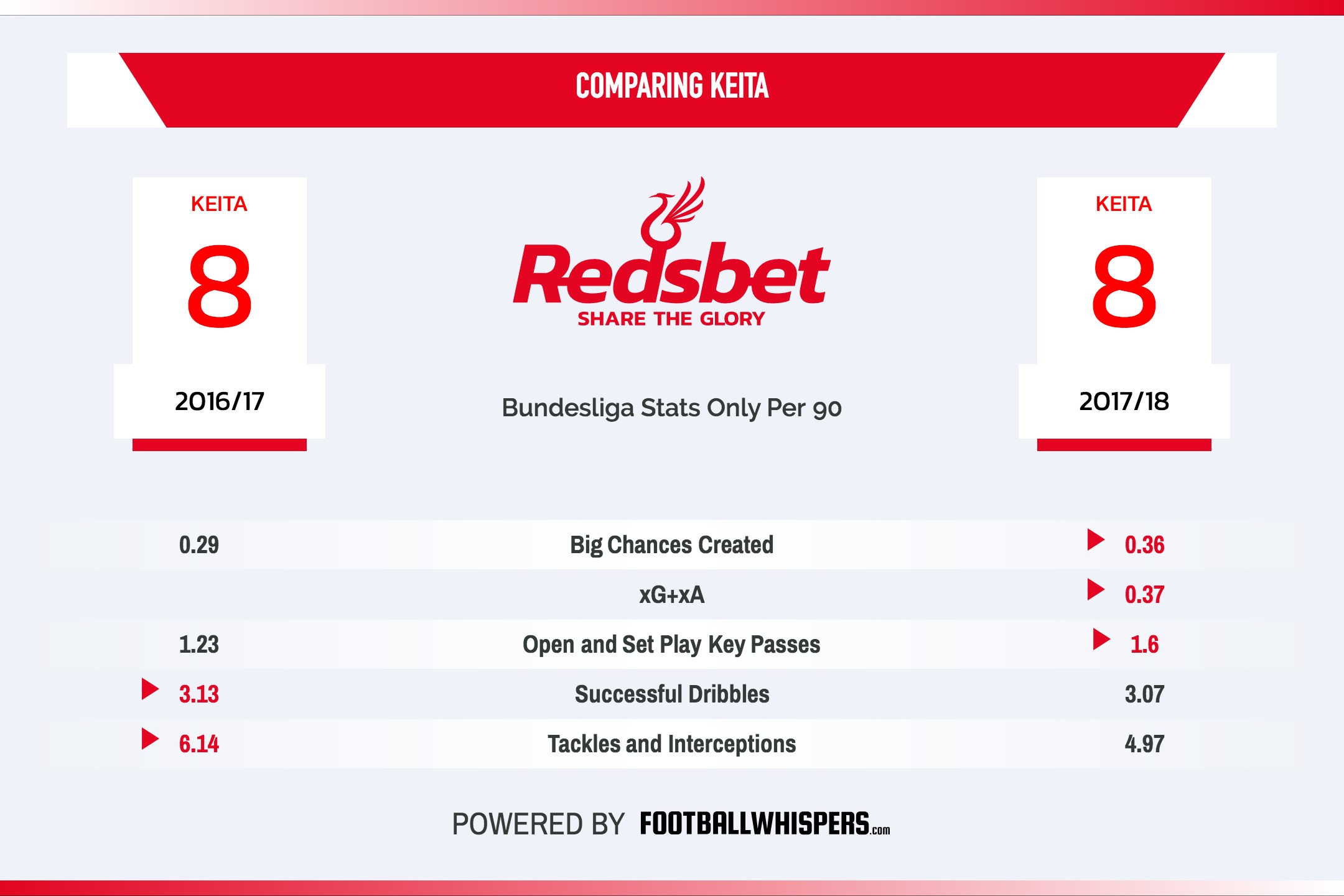 Yet Keita, playing a number of roles in a transitional side, managed to maintain a good output across the board. He averaged more open and set play key passes. He created more big chances. The RB Leipzig man completed over three dribbles per 90 while still averaging close to five tackles and interceptions per 90 minutes – down from the 6.2 he was posting during the 2016/17 campaign but still more than any Liverpool player recorded last term. His expected goals and expected goals assisted numbers remained similar at 0.37 per 90 minutes.

He was eerily consistent in a team lacking continuity and coherence.

This was a player who knew he already had a move in the bag. He was, for the majority of the season, Liverpool’s record signing. He could’ve taken his foot off the gas and coasted. But he didn’t and that says a lot about him as a player and a person.

In fact, he stepped it up when it mattered most for the German team. His final 13 games for RBL, with the team chasing a place in the Europa League semi-finals as well as a top-four Bundesliga finish, saw him involved in seven goals.

He had a starring role in the win over Bayern Munich but his side fell at the final hurdle and missed out on Champions League football by two points. The former Red Bull Salzburg dynamo held up his end of the bargain despite what people would have you believe.

But Keita’s performances regularly justified the hype surrounding him. He’s been built up as a game-changer and that’s what he did. He’s been hyped as a match-winner and he continued to be one while at the Red Bull Arena.

Liverpool and Klopp didn’t just pursue Keita because of his consistency, though. The Reds had success last season because of their flexibility. They may have started in a 4-3-3 shape but the German tactician loaded his team up with versatile players which allowed him to make subtle changes without needing to burn substitutions. At times it looked like the Champions League finalists used countless systems and lined up in 4-1-4-1, 4-4-1-1, 4-4-2 and a 4-2-3-1 shapes.

They only managed this because the players at his disposal often took up one and a half positions. Alex Oxlade-Chamberlain would start as a right-sided centre-midfielder before pushing out to the right-wing and this allowed Mohamed Salah to take up a central area beside Roberto Firmino. Likewise, on the left, Andrew Robertson would play as a winger and this enabled Sadio Mane to drift into an attacking midfield role and pull the strings when tasked with greater creative responsibility. It was a theme throughout the entire squad.

Keita fits that. In fact he probably arrives as the most versatile player at Klopp’s disposal. He’s two, maybe even three, players packaged into one. He can play in a two-man midfield as part of a defensively minded set-up. He can act as a box-to-box midfielder, too, and at times he played in the two behind the strikers in RB Leipzig’s 4-2-2-2 shape. It’s almost a guarantee that he can do all of that in a midfield three. The 23-year-old doesn’t just do a job. He thrives no matter where he’s instructed to play on the pitch.

He’s often described as N’Golo Kante but with an attacking output. The comparison to the two-time Premier League winner is partly because of his intelligent positioning and his knack for popping up in the right place at the right time to quell attacks. And while his Chelsea counterpart isn’t bad on the ball, it’s when Keita is in possession that his real value is evident.

Unafraid to carry the ball and beat the opposition, Keita has a way of keeping the ball. It’s not orthodox and at times it’s not easy on the eye, but it doesn’t have to be. He takes out the defensive lines and he creates space for others. He’s incisive when in possession and 36 per cent of his passes go forward. For context, Liverpool captain Jordan Henderson plays 29 per cent of his forward, Gini Wijnaldum averages 22 per cent and the now departed Emre Can averaged 20 per cent.

Even more impressively, Keita completed more dribbles per 90 (3.07) then the three Liverpool midfielders managed as a collective (3.05). It’s why Klopp’s decision to bring in Fabinho is a masterstroke. The Brazilian destroyer allows Keita to do Keita things without worrying too much about what’s going on behind him.

He may not have kicked a ball for the Reds yet but this transfer could be the best bit of business Liverpool have done since the inception of the Premier League. He’s the No.8 that was promised after Steven Gerrard left. The ghost of the Liverpool legend is just another tag he can drape around his neck along with the price tag and the expectation. This is a player who has unwavering faith in his own ability and he’s not going to let anything prevent him from reaching the summit.