It was Arsene Wenger’s reluctance to spend money in the transfer market that turned ‘like a new signing’ into a scoffed-at cliche.

Like all cliches, though, there’s some truth to it. Players who’ve been out for a long time who then return from injury are like a new signing. And Alex Oxlade-Chamberlain – who hasn’t played since April – could come in at a good time for Liverpool in the Premier League run-in. Some reports have suggested the former Arsenal man could be back in action by March, much earlier than originally anticipated.

He made a surprisingly big impact as 2017/18 wore on, finishing the season with three goals and seven assists, largely from a central midfield role. Of course, it wasn’t just on-pitch matters that he became influential, his defence of Philippe Coutinho in a post-match interview when he was being (correctly, it turned out) linked with Barcelona winning him a lot of respect among Pool fans.

It seems that this character has been a boost to Liverpool even though the 25-year-old has been sidelined.

“Sometimes on the pitch you want to give everything to make [the injured players] proud because it’s not easy for them and their family,” Sadio Mane said recently. “Injuries are something I never wish on any football player.”

Liverpool to win the Premier League, 1.33*

“It will give the players a buzz to see him coming back and he will be a massive asset if he can get back for the [Premier League] run-in,” he’s said. “We’ve got a very good midfield who don’t get as many goals as they should do but that’s where Oxlade-Chamberlain comes in.

“He had it at Arsenal, it took a little bit of time to get to know the Jurgen Klopp way, the Liverpool way, but when he did, my goodness. He can dominate that drive from midfield, that powerful shot and the assists that he can bring. These are all assets that will help that midfield three that we’ve seen in the bigger games.” 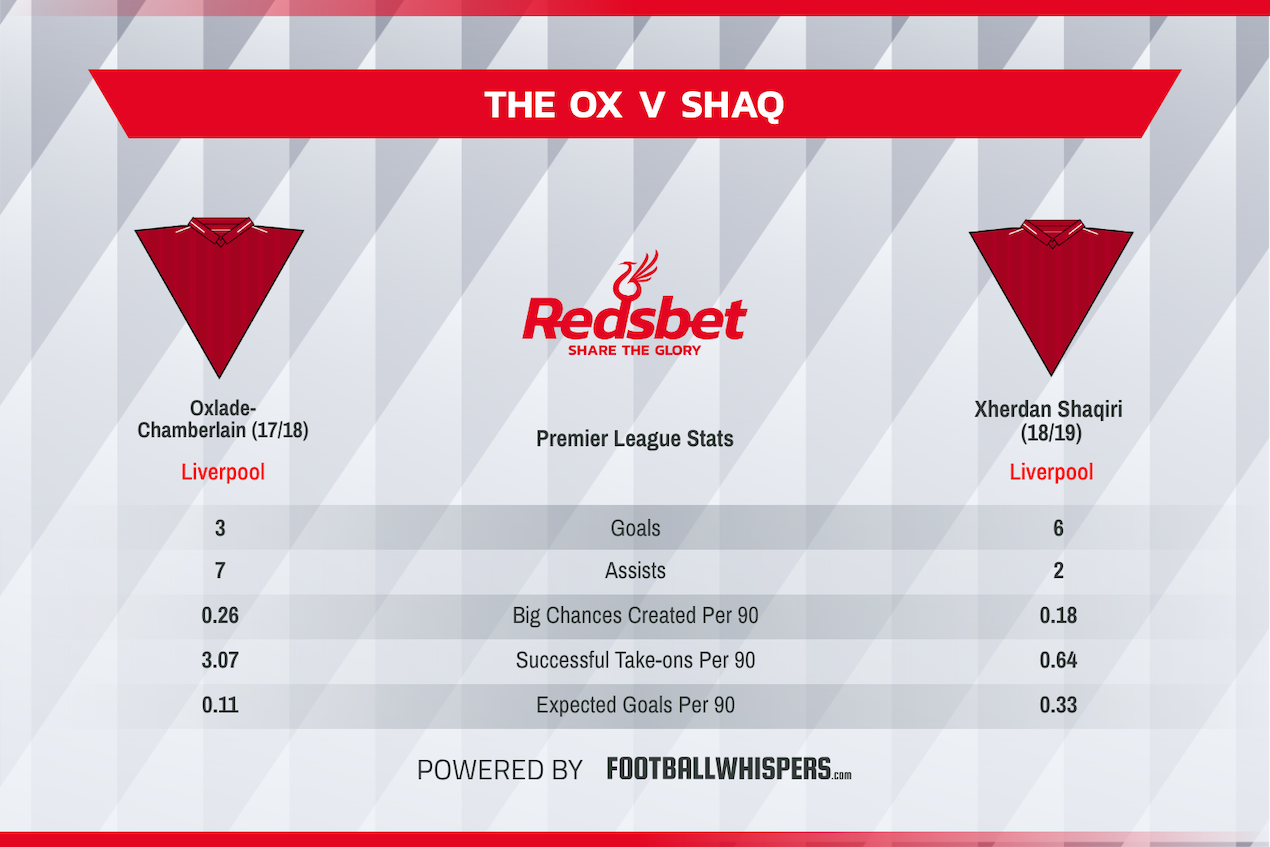 Flexibility in the run-in

It’s that mention of the run-in that’s key. Hopefully, Jurgen Klopp’s side will still be in the two biggest competitions available, the league and Champions League. Games will be coming quickly in the early spring months, and as deep a squad as possible will be very handy.

“We cannot, and will not, use Ox before he is 100% in all parts of the game, because anything else after not playing for a year pretty much, the risk would be higher,” Klopp has said.

There’ll be no worries that the midfielder will have to be thrown into a match he’s not ready for, undercooked and risking the team’s performance or further injury to himself. 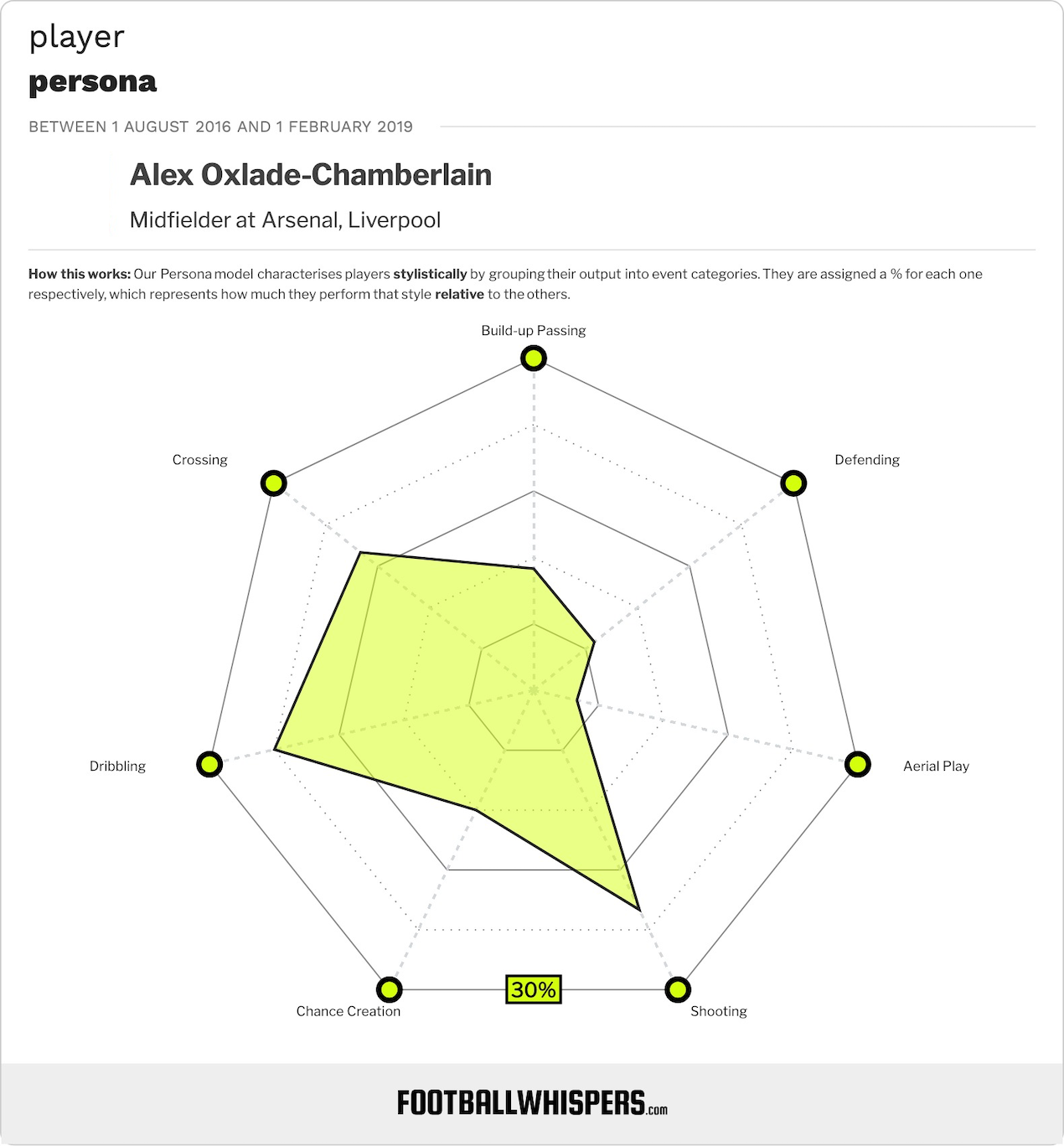 Without the signings of Fabinho and Naby Keita in the summer, this might not have been the case, but the squad is large enough now to accommodate giving Oxlade-Chamberlain as much time as he needs.

And when he’s on form, he can be an exceptional player, taking the creative and dribbling ability that he has as a former-attacking midfielder along with a strong work ethic and positional sense.

Liverpool to win the Premier League and Champions League, 10.75*

Like James Milner, he’s also something of a Swiss-army knife, able to slot in wherever needed. Last season he played a handful of games as a wing-back, the bulk of his time as a central or attacking midfielder, and even a game as one of the forward line.

As a long footballing season winds to a close, Oxlade-Chamberlain could be like not just one new signing, but several.

“Since five or six weeks [ago] you can see that he sees the end, the light at the end of the tunnel, and that gave him a massive boost, gives us a massive boost, so now it is really close,” Klopp said.

“You need time to adapt to the intensity of the game and that will take a while. But I pretty much can’t wait until we can involve him, at least for (a few) minutes. It is so nice.”

Football aside, that might be the best thing about the Ox’s imminent return. Just like a new signing, or perhaps even more than one, it’s putting a smile on everyone’s face.