Bottom half of the table teams used to be a problem for Klopp's Liverpool. Not anymore.

This weekend’s match against Fulham will, in all likelihood, be a symbol of how far Liverpool have come under Jurgen Klopp.

Not only are the Cottagers such a naive side that a win to take the Reds top of the Premier League (temporarily at least) is almost guaranteed, but it should also truly mark the end of an old belief that Liverpool struggle against smaller teams.

Our friends at Football Whispers are here to look at how this marker of Klopp’s side got turned on its head.

Liverpool special: Any Liverpool player to score a hat-trick vs Fulham,
WAS 4.00 now 5.50*

Klopp’s early games as Liverpool boss were as exciting as they were bizarre. Heavy metal pressing was combined with a consistent difficulty in beating teams in the lower half of the table.

Within a few months in charge, the German had tasted defeat to Crystal Palace, Watford and Newcastle. Palace, as well as Burnley, remained a particular challenge.

Liverpool were, unsurprisingly, better at home than away against these weaker teams, but Klopp’s Reds lost four of their first six away trips to newly-promoted sides. 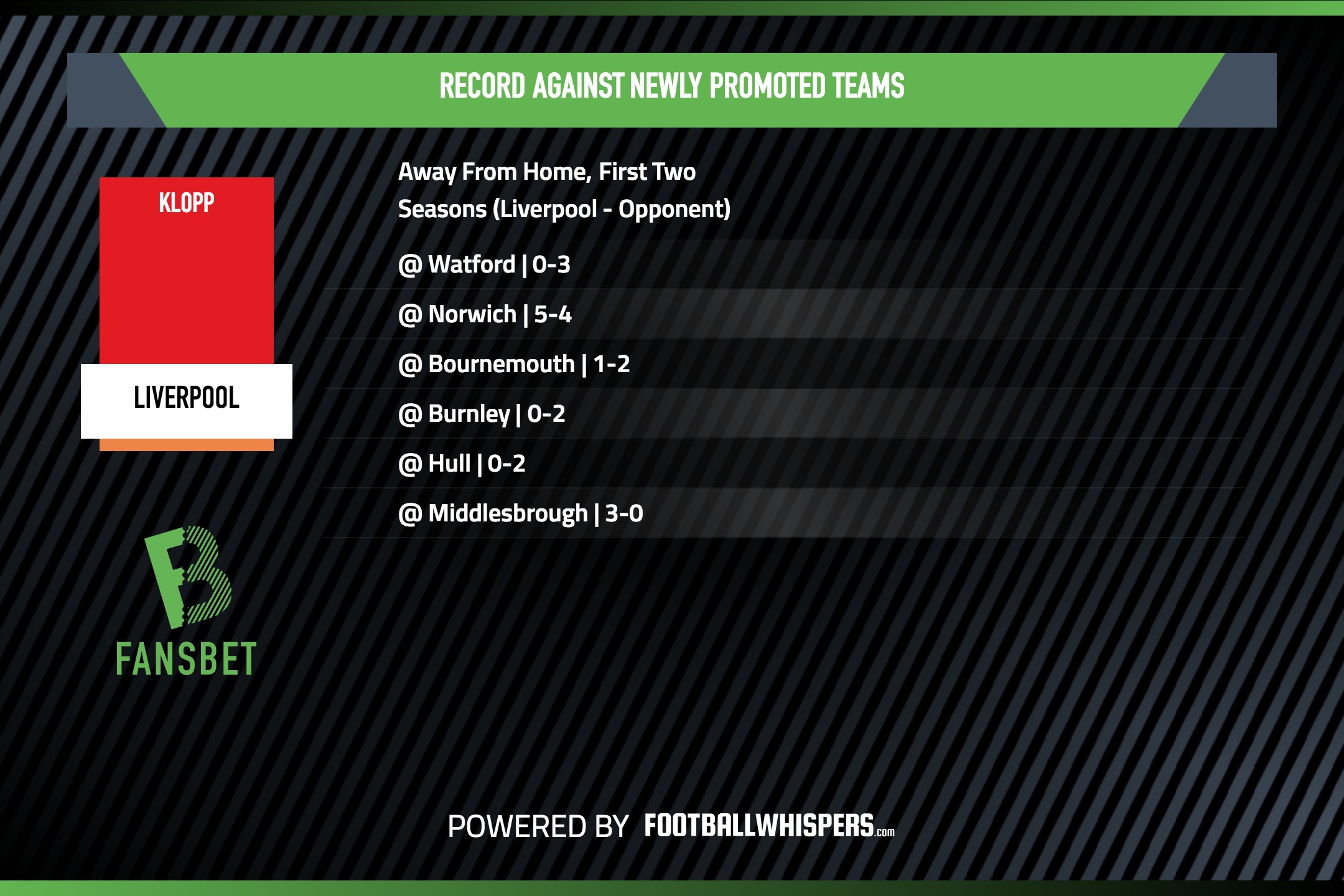 The 2-0 defeat to Sean Dyche’s Clarets in August 2016 was a hell of a symbol, for both teams. For Burnley, it was a sign that they weren’t going to be pushovers, and although they finished that season not too far off the relegation places, they were comfortably safe throughout the campaign.

For Klopp, it seemed like a confirmation of the team’s frailties – defensively vulnerable, and uninspiring in attack against a team who defend deeply. These are a thing of the past.

While the Reds might not be in the middle of a great run of form at the moment, there’s no denying the current Liverpool side are a totally different proposition to the one in Klopp’s first eighteen months on Merseyside.

The attack has continued to evolve and improve, and the defence is unrecognisable. The only team in Europe’s top five leagues to have conceded fewer goals than Liverpool are Manchester City.

This has been reflected in the meetings with newly promoted sides. In 2017/18, Klopp’s team won 16 out of 18 possible points against Newcastle, Brighton and Huddersfield, and this season’s account in these fixtures was opened a fortnight ago with a 4-1 demolition of Cardiff. 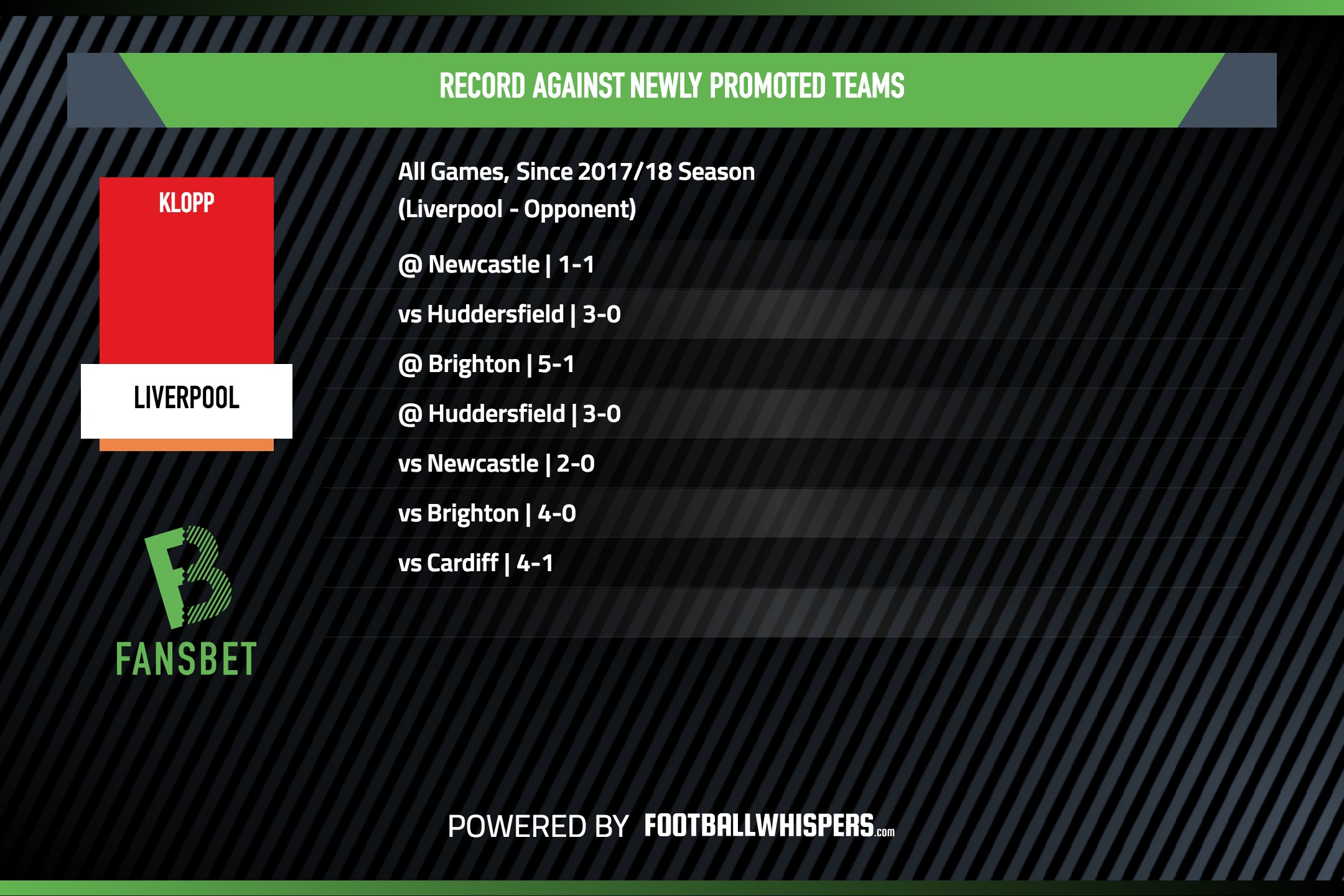 Of course, Klopp isn’t counting his chickens before they’ve hatched.

“We have to defend them. They are a skilled team offensively and tuned in doing a lot of things,” he said in his pre-match press conference. “The end product, the finishing was maybe not so good often enough but they’ve scored goals.

“On the other hand, they’ve conceded, but you will never score a goal against a team like Fulham with their quality only because you go into the game with the wrong attitude and think about scoring, scoring, scoring.

“This game is a big challenge, really, for all of us. We have to make sure we really don’t forget what kind of a good situation we are in.

“If someone goes there and expects an easy game then please stay at home because it will not be [easy], it will be a really tough job to do. It’s good we want to show a reaction, yes it makes sense, but the right reaction.”

The truth is, though, that recent matches indicate a good result is likely.

Not only have Fulham conceded the most goals in the league and Liverpool scored the second-most, since the start of 2017/18 the Reds’ aggregate against newly promoted teams is 22-3.

Klopp’s been in England long enough to know that that’s a cricket score and, even if he’s playing it down, there could be another one on Sunday.