How Liverpool evolved from exciting to elite

The EFL Cup defeat to Chelsea aside, the Reds have looked irresistible this season

Liverpool’s start to the 2018/19 season has been their best ever. For a club with such a rich, successful history, this takes some doing, but Jurgen Klopp and his team have managed it.

The 3-0 win at home to Southampton was their seventh consecutive victory in all competitions, and such a run is a first for the club at the start of a new campaign.

The run consists of six Premier League games including a victory on the road against top-six rivals Tottenham Hotspur, as well as a winning start in the Champions League courtesy of a 3-2 home defeat of Paris Saint-Germain. While the Reds fell to Chelsea in the EFL Cup on Wednesday night, it does not detract from Liverpool’s immense start.

Our friends at Football Whispers take a look at the work on the training ground and the stats behind their unprecedented start in an attempt to get to the bottom of what makes this team different to previous incarnations of Liverpool.

Part of what makes football the beautiful game is the possibility of the upset, the unexpected, and the unpredictable. But at the opposite end of the spectrum it’s also pleasing for football fans to see a plan coming together, and even more so when this plan fits with the general ethos and ideals of their club.

Back Liverpool to go the whole PL season unbeaten at home at 6.00 with RedsBet*

Liverpool have long been associated with pass and move, decades before the term tiki-taka started being used (and misused) across Europe in association with the great teams put together by Pep Guardiola, and are now playing a modern version of this style under Klopp.

Guardiola’s teams can accurately be described as “great” thanks to the style of football they played, the entertainment they provide for fans, their results, and most importantly the trophies they brought home.

All of these things make great sides, and the only thing Klopp’s Liverpool are lacking from this list are the trophies. And it’s a major miss.

The beginning of the 2018/19 season has seen Klopp’s plan fall into place like never before, and they top the league with a perfect record in search of the club’s first league title since 1990.

When looking at what is different about this season in comparison to the past few years, it’s important to remember the smaller sample size of the latest campaign, but the club have played a variety of opposition sides which have required different approaches, thus offering a clear idea of how Klopp has his team playing.

The Football Whispers team persona shows a couple of noticeable differences from the outset. The most obvious one comes in the form of crosses, with inaccurate crosses down to 12.8 per game compared to 15.7 and 16.8 in the past two seasons. 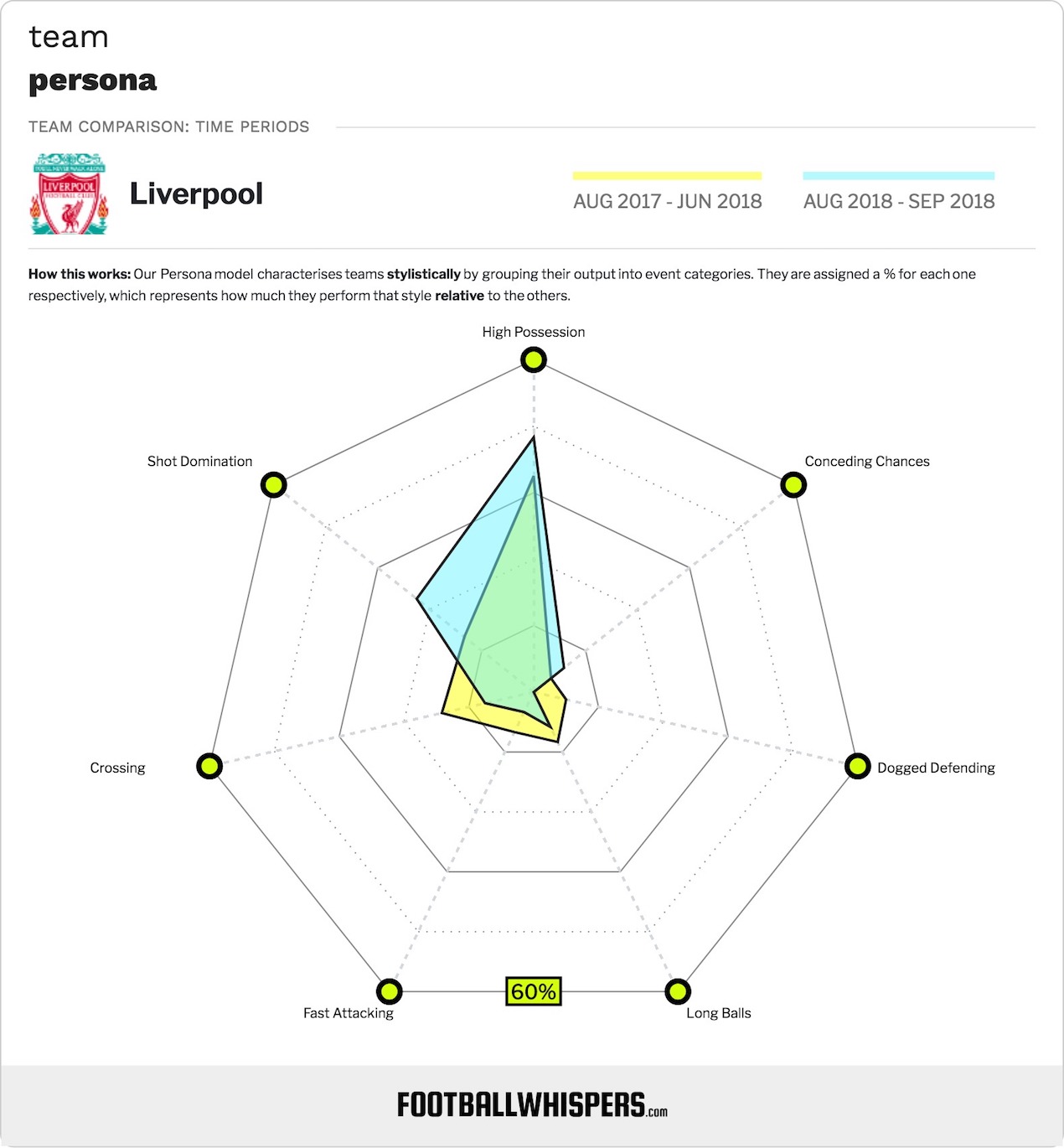 This could also be influencing the increased shot domination as more care around the box leads to more shots from advantageous positions, but shot domination is also down to the defence who are blocking more of the opposition’s attempts on goal.

This season the club are averaging 2.7 blocked shots per game. These still count towards the number of shots against, but fewer of them are making their way through to the goalkeeper. Last season Liverpool blocked 1.9 shots per game, and in 2016/17 the number stood at 1.7. With 8.2 shots conceded on average per game this season, this shows that around ⅓ of shots faced are being blocked.

Sadio Mane now leads the club’s scoring charts with four, and he could well be this season’s Salah, but it’s more likely that the goals, assists, and other attacking contributions will be shared around the side.

Back Salah, Mane and Firmino to score 15 PL goals each at 2.00 with RedsBet*

The main features of Liverpool’s approach to the game this season are not necessarily radical changes, but small improvements here and there. Their work on throw-ins with specialist Thomas Gronnemark, and an obvious improvement at set-pieces in general which has been evident since last season, show they are looking for small wins which could make a big difference to the bigger picture.

There is no obvious area of improvement, and in truth Liverpool haven’t yet looked as good as they did at times during the last campaign, but goals from a number of avenues, and the ability of their players to perform multiple roles, sharing the burden in both defence and attack, has meant they have won games even without getting into top gear.

This is all helped by increased squad depth, which has been the result of a better recruitment strategy in recent years. They hope that this will help the club challenge on multiple fronts and finally claim the silverware which will go towards making Klopp’s Liverpool one of the great European sides.