Have Fabinho and Jordan Henderson nailed down their places in Liverpool's midfield after impressive performances against Crystal Palace?

“In recent games, we take great inspiration from people like Fabinho.”

Liverpool captain Jordan Henderson wrote in his programme notes ahead of Crystal Palace’s visit to Anfield on Saturday.

“Yes, he’s an experienced international with a track record of performing well in multiple positions – but to play centre-half at Brighton and play like he did impressed everyone.

“There was no fuss or drama from Fab – he just delivered.”

It may have taken Fabinho a while to adjust to the demands of Jurgen Klopp and the Premier League following his £38million move from Monaco last summer, but the Brazilian midfielder has impressed since breaking into the team, earning the admiration of his skipper.

The Reds’ central defensive injury crisis led to Fabinho, who first made his name as a right-back at Monaco, filling in at centre-back in an unspectacular yet important 1-0 victory over Brighton & Hove Albion on January 12.

Henderson and Fabinho have started 22 Premier League games between them for Liverpool this season, but they’ve only been in the same line-up three times, and just twice as midfield partners. 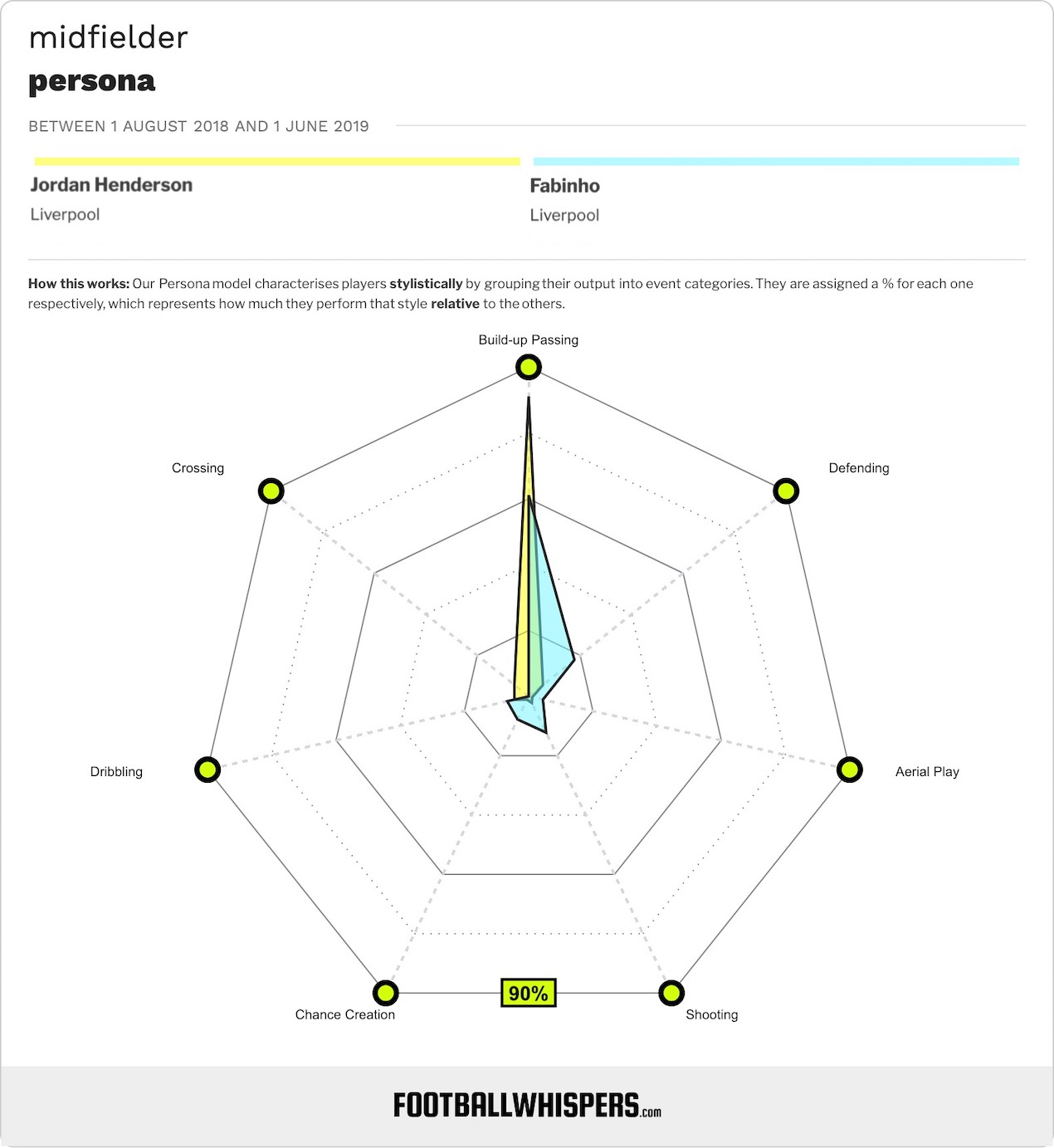 The former Sunderland midfielder was eased back into the fray this term after his summer World Cup exertions, having to wait until September 1, in the 2-1 defeat of Leicester City, to make his first Premier League start.

And misgivings over Fabinho’s readiness for the English top flight meant he only received his first start on 27 October, in a 4-1 victory over Cardiff City.

The pair first teamed up in midfield for the 2-0 win away to Wolverhampton Wanderers on 21 December, forming the base of Liverpool’s midfield in a 4-2-3-1 formation. Despite earning three points in a fixture many of the top six have faltered in this season, Fabinho and Henderson weren’t fielded in a double pivot again until the 4-3 win over Palace at the weekend.

Klopp has chopped and changed his midfield this season, with the middle third of the pitch the only uncertain area of the Merseysiders’ squad; goalkeeper, back four and front three are all well established.

Naby Keita is yet to rediscover his best form following his long-awaited £52million move from RB Leipzig and veteran James Milner has struggled for consistency when trusted with regular minutes, seemingly more valuable as a rotation option.

Debate has been raging among fans for months over who should be considered the side’s first-choice defensive midfielder, with some loyal to the skipper and others extolling the virtues of Fabinho. 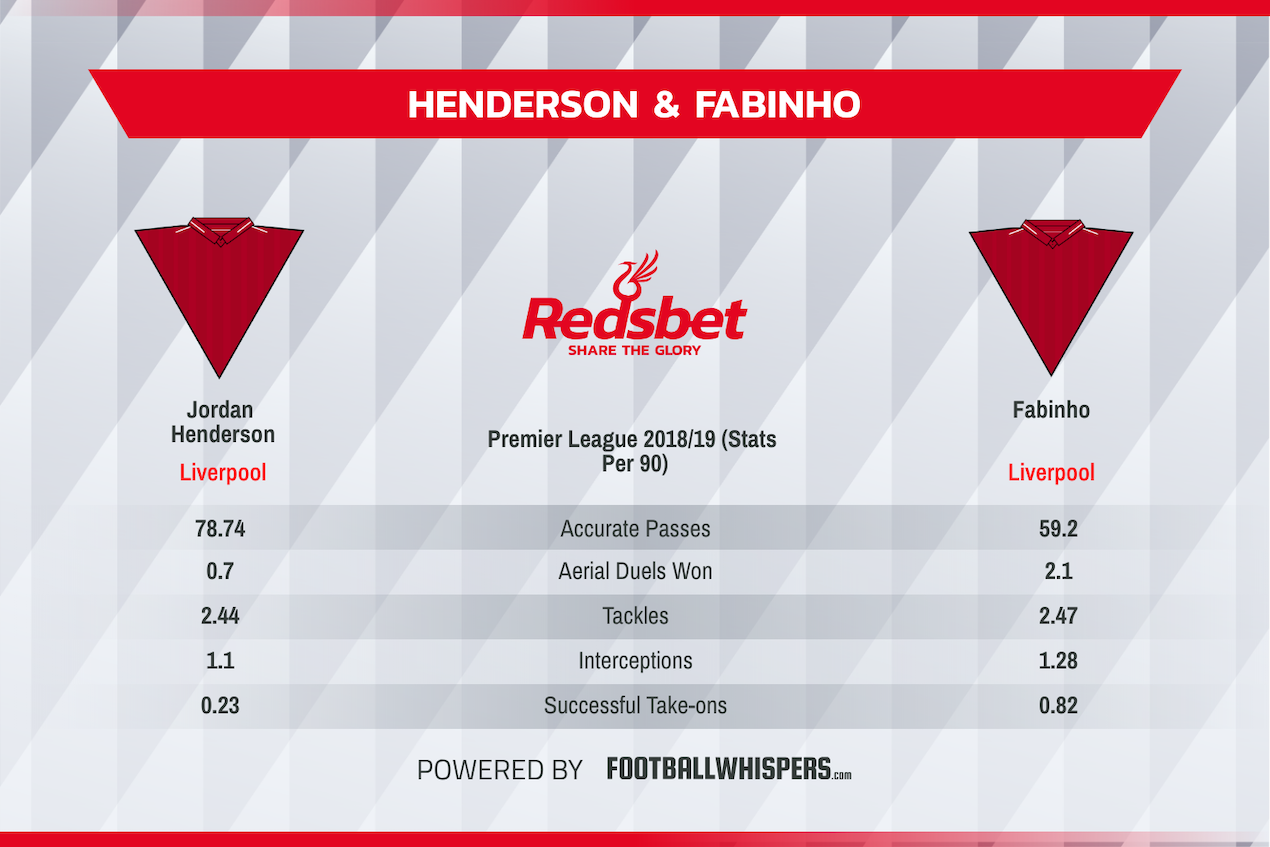 However, with Klopp continuing to experiment with a 4-2-3-1 formation and all other options given more of a chance to impress, perhaps it’s time for Henderson and Fabinho to be given a run of games alongside one another.

On paper, they seem an ideal fit, with each excelling in the other’s weak areas. Fabinho, unlike Henderson, offers athleticism and dynamism, covering the space in front of the back four adeptly and able to call upon a useful burst of speed when required.

Henderson, as the team captain, is an excellent communicator, capable of organising and rallying the troops in a way Fabinho, still learning the language, cannot. And both are comfortable in possession and sound positionally.

Back Virgil van Dijk to win the PFA Player of the Year Award at 1.80* with RedsBet

Against Palace, despite the Eagles giving the league leaders a scare, no player touched the ball more than Henderson, while Fabinho’s creative skills came to the fore, conjuring three chances for team-mates.

Clinging to a four-point advantage at the top of the table in search of their first title in 29 years, there remain several tough tests for Liverpool. From here, it’s about grinding out results. With their combination of steel and composure, a Henderson-Fabinho double pivot might be the answer to Klopp’s midfield selection dilemma.