It speaks volumes about the levels of wealth in English football that a club can pay tens of millions of pounds for a new player and feel no compulsion to thrust him straight into the first team.

Such was the fate of Fabinho, Liverpool’s £43.7million summer signing from AS Monaco, who had to wait until the tail end of September before making his full debut for the Anfield club. But after a frustrating start, the 24-year-old Brazilian has finally begun to show fans what he can do, with some impressive performances in the holding role of Liverpool’s midfield.

The man he has to push past to really make that position his own is England international Jordan Henderson. Our friends at Football Whispers have taken a look at who’s likely to come out on top in this increasingly heated tussle.

Fresh off the back of an excellent World Cup that saw him on the pitch for 482 minutes of the 690 that England played in total, Henderson was one of the Three Lions’ star men in Russia. In fact, an article by TalkSport written after the tournament even suggested that Henderson had become coach Gareth Southgate’s most important player.

With tireless work rate and leadership skills, the Sunderland-born 28-year old certainly adds an extra dimension to Liverpool when he plays. Despite his arduous summer endeavours, his ability to win the ball back seems to have gone up a level, with a tackling success rate of 92% representing a career high. 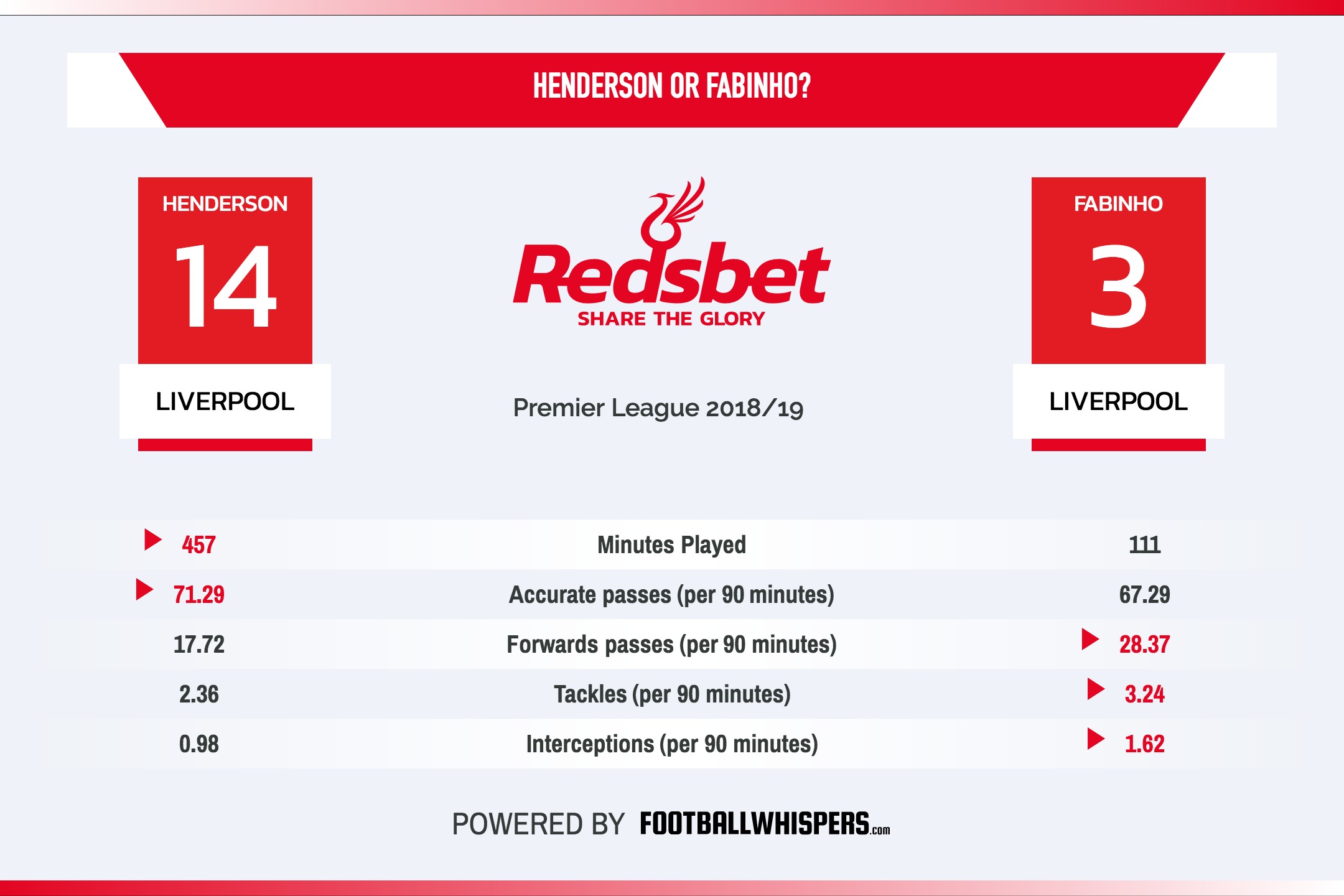 His passing ability – although his figures are currently down from previous seasons at 45.00 per 90 – remains integral to keeping the side ticking along. Indeed, it could be argued that if Henderson added goals to his game, he’d be something approaching the complete midfielder.

One of the more entrenched football stereotypes is that all Brazilian players are twinkle toed mavericks with a penchant for showmanship. In fact, Brazil has a rich heritage of producing artisans as well as artists, and Fabinho certainly falls into the former category. Liverpool’s transfer targets this past summer were varied, but shoring up the club’s defence was certainly a priority.

But that’s not to say Fabinho is a one trick pony. On the contrary, his performance during the Reds’ 4-0 victory over Red Star Belgrade in the Champions League in late October was like watching Steven Gerrard and Graeme Souness rolled into one.

After seeing him crash into tackles and spray long balls around, one wag on Twitter even commented that he’d played more forward passes than Henderson had managed in his entire decade-long Liverpool career. Others were even less charitable, simply declaring that Henderson’s time at Anfield was up. 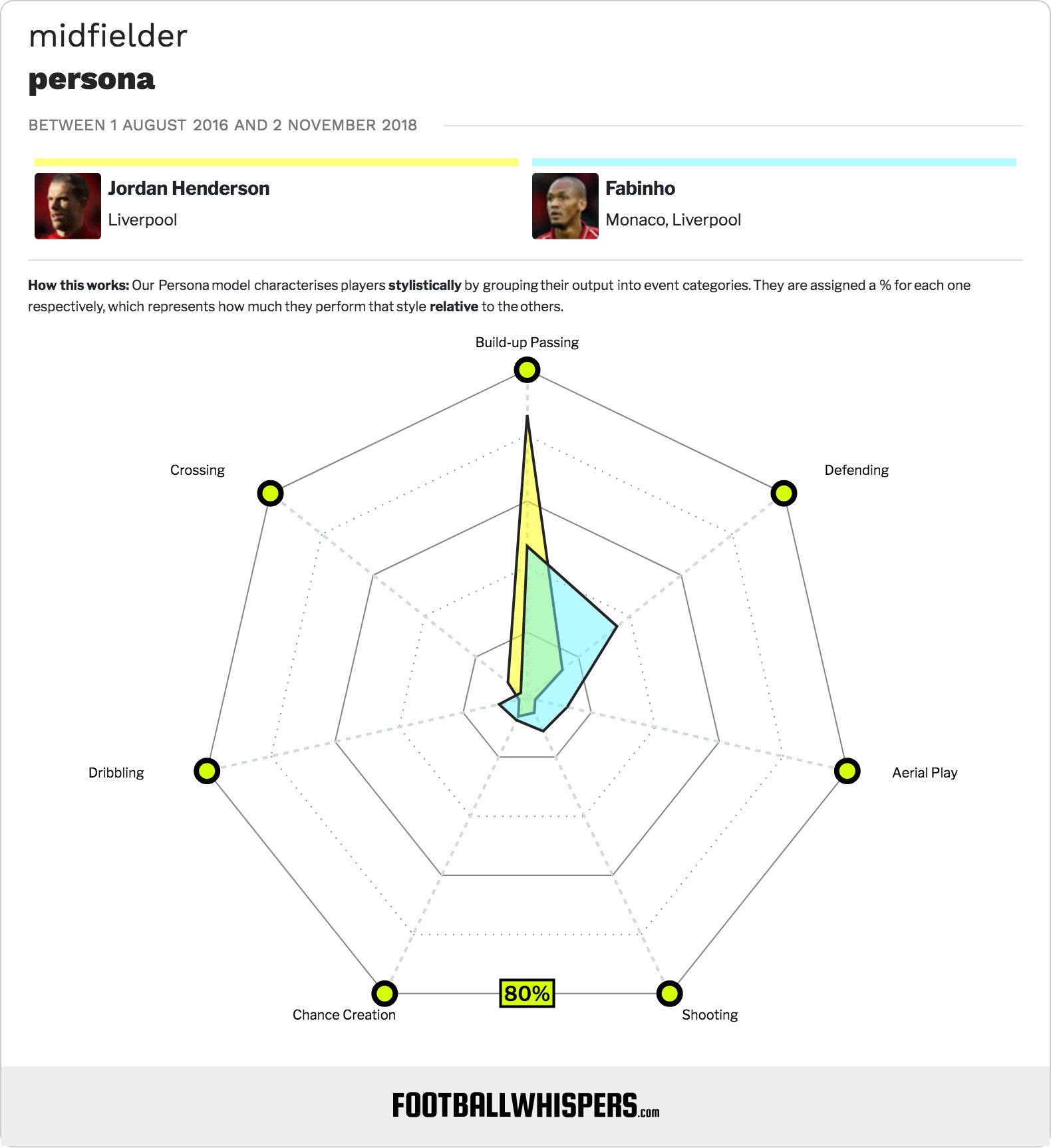 Nonetheless, the main attribute in Fabinho’s favour remains his defensive instincts, and in particular their liberating effect on other players.  Safe in the knowledge that the Brazilian will remain on guard behind them, the likes of Georginio Wijnaldum are encouraged to make attacking forays, adding to Liverpool’s already potent threat going forward.

Ultimately, it may well be Fabinho’s superior energy levels and defensive discipline that finally get him the nod over Henderson, who in contrast appears to be feeling the effects of the summer. Certainly, with Liverpool occupied by three competitions, there’ll be plenty of opportunities for both players, but currently it’s the Brazilian that looks be edging ahead in the pecking order.

No substitute for leadership

Henderson’s main hope of fighting off the challenge of Fabinho could lie in his off-pitch talents, as much as anything else. Before the season began, with many questioning how he’d fit into the team given the signings of both Fabinho and Naby Keïta, Klopp hinted that Henderson’s ability to galvanise the club was irreplaceable.

“Hendo is so important to us, not only as a player but also as a person and as a leader,” he told the Liverpool Echo. “You need these players like Hendo and Millie [James Milner] to help create a special spirit in the squad, otherwise it doesn’t work.”

If Henderson felt this was being damned with faint praise, it would’ve been an understandable reaction. But the harsh reality is that competition is incredible fierce at Liverpool nowadays, as the club strives to push on to the next level. If last season’s thrilling Champions League campaign, which ended in defeat to Real Madrid in the final, is to act as a springboard to future glory, sentiment must go out of the window. Let battle commence.