HAS THIS LIVERPOOL TEAM MOVED ON WITHOUT ADAM LALLANA?

A few seasons ago Adam Lallana was arguably our most important player, but do injuries and a developing team paint a different picture today?

The criticism of Adam Lallana’s performances this season have shown the current crop of Liverpool players have moved a level above where they have been in previous seasons.

Lallana, who had previously been a regular under the German, looks a shadow of the player we once saw in the Liverpool shirt. Blighted with injuries in recent years, the 30-year-old was out for 160 days due to injury last season.

Yes you did read that right ONE HUNDRED AND SIXTY.

Lallana has always been a favourite of Klopp’s, a player who personifies the German’s gegenpressing style of play.  The former Southampton man had his finest spell in a red shirt under Klopp, during the 16/17 season he was an influential figure in Liverpool qualifying for the Champions League.

Starting 27 games, he registered eight goals and seven assists, this was his best every return in the Premier League for The Reds.

Prior to Klopp’s arrival Lallana had failed to live up to his £25million price tag. From his time at Southampton it was clear he was very technically gifted player. However, consistency was the biggest issue for the England international. During the German’s early reign at Anfield he operated with a 4-2-3-1 shape, Lallana was ever present figure, usually operating in the right attacking midfield role.

Klopp debuted a new formation when Liverpool travelled to Stamford Bridge in October 2015, lining up with a 4-3-3, and Lallana found himself on the right-hand side of a forward three. The German had lots of success with this new formation in the same season, most notably beating Chelsea  and doing the double over Manchester City.

The former Borussia Dortmund manger started the 16/17 season with a 4-3-3, and in truth has never looked back since.

Signing Senegalese winger Sadio Mane in the summer of 2016 allowed Lallana to play once again in his preferred role as a central midfielder. He started the season on fire for Liverpool, notching seven goals and seven assists before the turn of the year.

His form was rewarded when Lallana signed a new three year deal in February 2017 worth a reported £110,000 a week.

However, since then things just haven’t gone to plan for the former Southampton star.

The 2016 England player of the year has only been handed three starts by Klopp this season, against Huddersfield, Cardiff and Red Star Belgrade. Lallana has failed to create much of an impression in any of his outings and has received some criticism for his lack of impact in a blunt midfield. 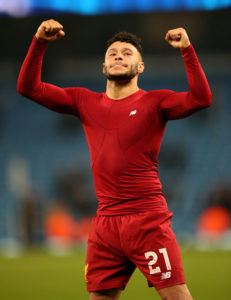 Liverpool fans have been hugely missing Alex Oxlade-Chamberlain this season.

A knee ligament injury prematurely ended his 17/18 campaign and has now ruled him out for the whole of the 18/19 season.

Last year’s Champions League runners up have been missing that link from midfield to attack, someone who is able to pick the ball up and drive forward with it.

Oxlade-Chamberlain was fantastic at driving forward with his pace last season and it has been sorely missed this year in his absence.

After a deal for Nabil Fekir broke down during the summer Klopp would have been hoping that Lallana would be able to bridge that missing link from the midfield to attack, like we saw him do a lot during his earlier days at the club.

The reality of the situation has been very different and going off what we are seeing from Lallana so far this season – this Liverpool team may have just moved on without him.