After the change back to 4-3-3 vs Bournemouth, we take a look at which Liverpool star is best suited to the central striker's role

Liverpool got back to winning ways on Saturday with the 3-0 dismantling of Bournemouth at Anfield.

The Reds carved out a number of chances and on another day that scoreline would be much closer to double digits.

Jurgen Klopp reverted back to the 4-3-3 shape he’d been married to for the majority of his time in England and the team had their swagger back.

Was it just a coincidence, the perfect storm given the opposition they found themselves up against, or are Liverpool better when using this shape?

While the midfield three of Naby Keita, Fabinho and Gini Wijnaldum have rightly been praised for their performances, the real difference at Anfield on Saturday happened to be in the final third.

Against Eddie Howe’s men, however, Salah returned to his role on the right wing with Firmino pushing up to become the centre-forward. The Cherries couldn’t handle the link-up play between the pair of them with the Liverpool No.11’s inside runs causing all kinds of problems.

It was a pattern of play so many fans became accustomed to seeing last season. The Brazilian’s movement created space for Salah to exploit. Rinse and repeat. The opposition knew what was going to happen but were powerless to prevent it.

The emphatic win over Bournemouth has resulted in some fans suggesting the return to the 4-3-3 should be a permanent one. But should Firmino take Salah’s place as the man leading the line or has the Egyptian done more than enough to make that role his own? 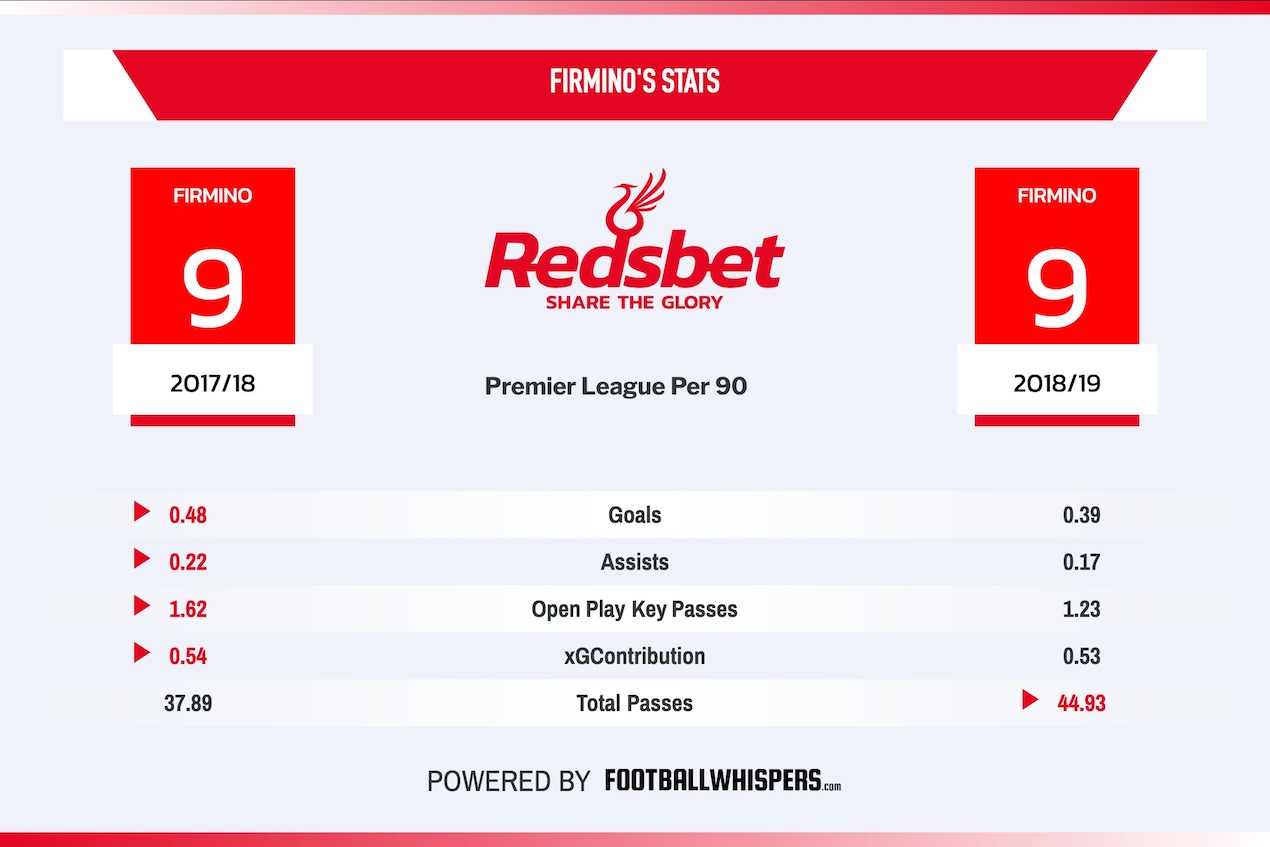 All our Champions League markets are here!

First off, let’s take a look at Firmino’s stats. For the majority of the 2018/19 campaign, he’s been deployed as an attacking midfielder. The man to link the midfield and the attack. As you can see in the graphic above, the switch has had an impact on his output.

He’s averaging fewer goals and assists while his key passes per 90 has dropped off by 0.29. However, his xGContribution, a stat which looks at expected goals and assists, remains the same despite the change in position.

Whereas last season he was substantially outperforming this metric last season with 0.70 goals and assists, this time around he’s currently par with 0.56. The drop-off could be down to the fact Firmino is averaging fewer touches in the penalty area as well as fewer shots this season.

The post-shot xG stat, which takes into account where the shot is on target, actually shows Firmino is adding 0.8 shot quality onto his efforts, exactly the same as he was last season.

The Brazilian’s finishing hasn’t worsened. He’s just not as productive as he was when utilised as a No.9. 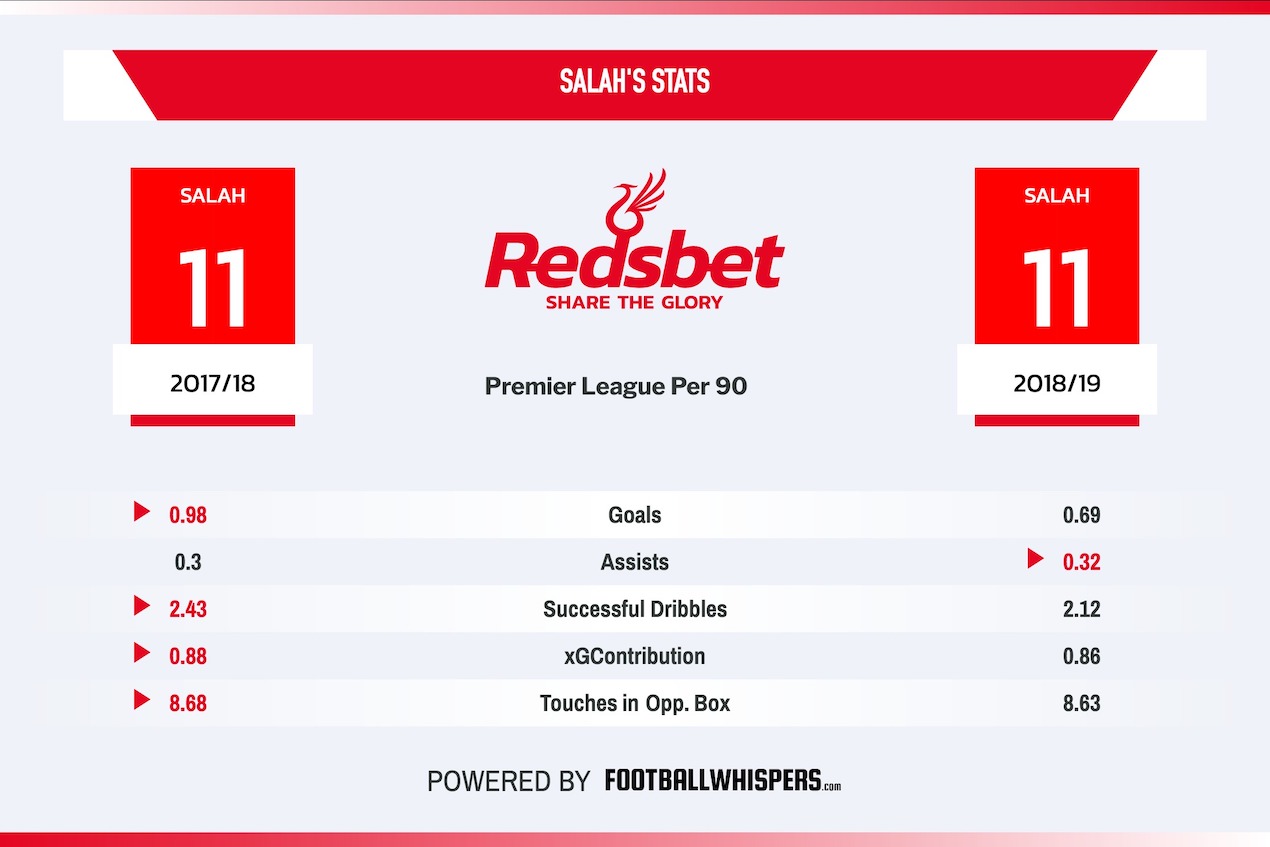 All our enhanced odds for Liverpool vs Bayern Munich are here!

Salah’s stats paint a similar picture. All but one show his performance during the 2017/18 season was better.

Again, his xGContribution remains roughly the same (0.88 to 0.86 this season), and he is still managing to outperform this metric (1.28 goals and assists per 90 during the 17/18 campaign and 1.01 this season). Salah’s successful dribbles and touches in the opposition’s box remain impressive but trail what he was posting last season.

While neither Salah or Firmino have underperformed in their new roles this season, both posted better numbers last season. Of course, the switch in formation and style needs to be taken into account. Liverpool are more patient this season and less explosive. They aren’t as reliant on gegenpressing and the tempo is slower.

You also need to factor in that the Reds failed to sign Nabil Fekir or someone of his ilk last summer meaning Klopp didn’t have an array of options to play that attacking midfield role. It was Firmino or nobody. There’s no escaping it, though, Liverpool look far better with their Brazilian leading the line.