Two weeks after it began in Moscow, the greatest World Cup group stage in living memory has finally come to an end.

Global viewers have been fortunate to witness a fortnight full of dramatic late goals, a slew of astounding pieces of individual excellence, and the addition of an absolute bucketload of melodrama thanks to the supremely entertaining VAR system.

Alas, despite a fourth minute red card, a team progressing based on yellow cards, and even an aborted somersault throw-in, the most staggering moment of the first round in Russia is unquestionably Germany’s departure from the tournament. Die Mannschaft entered the competition as favourites but came up short against a trio of unfancied opponents, culminating in a humiliating defeat to South Korea in Kazan.

Meanwhile, many of the other much-lauded nations, including Brazil, France, Spain, and Argentina, have delivered consistently unconvincing performances.

All of which means that the possibility of an outsider winning the 2018 World Cup has most definitely increased. So, let’s have a look at a few in-form teams who can truly start dreaming of lifting the Jules Rimet trophy in two weekends’ time. 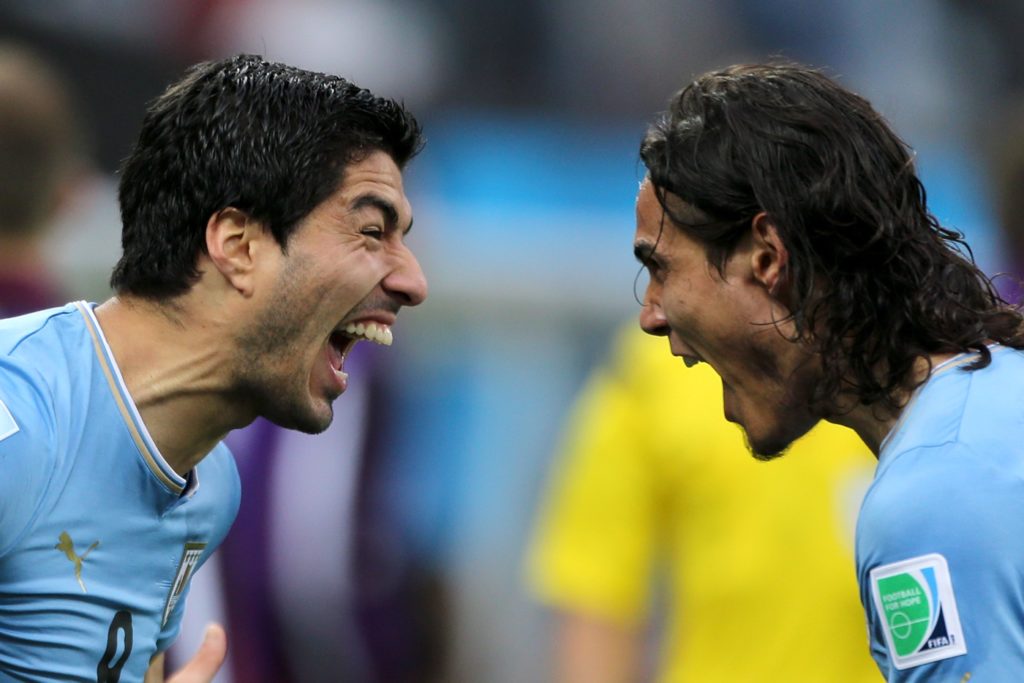 Oscar Tabarez’s men struggled to turn their dominance into goals early on, needing a 90th minute winner to earn three points in their opener against Egypt, before beating lowly Saudi Arabia again by just a single goal. But their 3-0 victory over the previously impressive hosts in their final group game saw them step things up a gear as Luis Suárez and Edinson Cavani’s partnership finally flourished, with both forwards finding the back of the net.  La Celeste have controlled all three of their matches so far from start to finish, and their impenetrable defensive due of Diego Godín and José Maria Gimenez have provided the bedrock for three consecutive clean sheets. With both of their talismanic frontmen off the mark, combined with the strength of their defensive solidity, Uruguay have enough quality at both ends of the pitch to beat any opposition if they play to their full potential. Their opponents in the next round are Portugal, who, despite the prolific goalscoring of Cristiano Ronaldo, laboured at times in all three of their group stages matches, against Spain, Morocco, and Iran.

Another side with three wins from three matches, Croatia have been arguably the most impressive team in Russia so far. Their midfield trio of Luka Modric, Ivan Rakitic and Marcelo Brozovic have all been at their tenacious best, adding individual sprinklings of quality at decisive moments, and providing their teammates with the platform to best Argentina comfortably while making light work of Nigeria and Iceland. The centre-half pairing of Dejan Lovren and Domagoj Vida have been excellent, while the physicality of Ante Rebic, Ivan Perisic and Mario Mandzukic up-front is enough to cause problems for any opponent. With a round-of-16 tie against a mediocre Denmark to come, they should be guaranteed at least a quarter-final spot.

They were heading out of the tournament until Yerry Mina’s goal against Senegal with 20 minutes to go in their final group stage game in Samara, but don’t let Colombia’s late escape fool you. José Pékerman’s side were on the back foot from the moment Carlos Sanchez was sent off with 86 minutes left to play against the Japanese in Group H’s opening match, and had to be at their assiduous best to secure qualification with a pair of victories against Poland and the Lions of Terranga. As emphasised in their 3-0 demolition of the Poles, the frontline quartet of Radamel Falcao, Juan Cuadrado, Juan Fernando Quintero and James Rodriguez can attack with relentless fervour when firing on all cylinders. If they manage to beat England in the round-of-16, they’ll face the winners of the Sweden-Switzerland tie in the next round, which should allow them to reach to the semis without too much trouble.