'Lethargic, rigid and impotent.' - Dan Austin's analysis of a sobering night in Paris.

But the overriding reason Liverpool were beaten so comfortably by Paris Saint-Germain last night is that the Reds were absolutely dogshit.

From start-to-finish at the Parc des Princes Jürgen Klopp’s team were lethargic, rigid and impotent. Liverpool never recovered from PSG’s determined start, allowing the game’s pace and rhythm to be dictated exclusively by the home side. In a match where qualification for the knockout stages could have been assured, amongst the players there seemed a worrying lack of urgency, and very little belief that a positive result was possible.

Make no mistake, the French champions played well. Their performance was much improved from the Group C opener at Anfield back in September, featuring a significantly more robust midfield, a calmness exuded by Thiago Silva and Gianluigi Buffon, and a far more intelligently thought-out tactical set-up from manager Thomas Tuchel.

The fit-again Neymar and Kylian Mbappé caused all sorts of problems down both flanks, as is to be expected from two of the world’s best attacking players, but the consistent ease with which the Parisians were allowed to enter dangerous areas of the pitch was maddening to witness.

This was not an imperious display from PSG. Their attacking output was dynamic but not irresistible, their defence solid but not impermeable, their team formidable but not unplayable.

Liverpool had a combined total of five shots on target in their three CL away group games and failed to score from open play. #LFC

Klopp opted for the same midfield trio which performed so admirably in the 3-2 victory on matchday 1, but here all three of Georginio Wijnaldum, James Milner and Jordan Henderson showed the worst of their faces. None managed to assert any kind of authority on proceedings, none sought to provide a link to the isolated attackers, and none reacted quickly enough to the movements of opposition players in the middle of the pitch.

The performance was frustratingly reminiscent of those already produced on trips to Italy’s southern coast and the Western Balkans this autumn. For the first time in their history Liverpool have lost all three of their away games in the Champions League group stage, and each individual defeat has unquestionably been all they deserved. 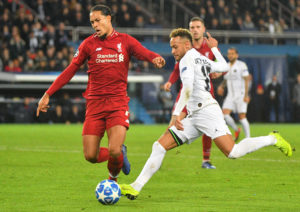 The buccaneering, rambunctious side which last season pulverised Porto, made mincemeat of Manchester City, and ran Roma ragged now feels like a distant memory from a different epoch. The Liverpool team which has ensured the club’s best start to a Premier League season this campaign is completely unrecognisable to the one which is contesting the club’s European fixtures.

The inconsistency between the levels of performance in the league and in Europe is becoming baffling. These are predominantly the same players, playing in the same system, looking to the win football matches in the same style. But the divergence between the resilient, imposing team which is second in the Premier League, and the languid, feeble Liverpool which is staring the Europa League in the face, is incomprehensible.

Liverpool this season are a team of huge contrasts. They’re immeasurably improved in defence, but significantly less ruthless in attack. They’ve earned an excellent amount of points, but their performances have often been mediocre. They seem like they’re on the cusp of glory, but also like they might be about to throw it all away.

December is always one of the most crucial portions of any season, and it has never been more true than this year. In the next fortnight Liverpool will play both Everton and Manchester United at Anfield, will face tricky trips to Burnley and Bournemouth, and will come up against Carlo Ancelotti’s Napoli in the kind of pivotal midweek clash that supporters live for.

By the end of that run, Liverpool could have fallen adrift of Manchester City and be drawn in the Europa League round-of-32.

Or they could keep the pace in the title race and be dreaming about another run to the European Cup final.

The contrasts could not be bigger.