Could keeper search finally be over?

goalkeeper Jasper Cillessen of Holland during the International friendly match between Slovakia and The Netherlands at Stadium Antona Malatinskeho on May 31, 2018 in Trnava, Slovakia

Sometimes it requires a short, sharp stab of reality for someone to see the error of their ways. But in the case of Jurgen Klopp and his admirable loyalty to Loris Karius it was slowly plunged into the Liverpool manager over 45 agonising second-half minutes in Kiev.

The Champions League final left the Liverpool coach in no doubt Karius is not the answer to his seemingly eternal search for a long-term goalkeeper of the consistency of a David de Gea, Thibaut Courtois or Hugo Lloris.

It’s one of the few missing links in a Liverpool team who linger on the periphery of being credible Premier League title challengers only to seemingly undo everything with a never-ending cycle of mistakes.

For now, Karius’ future at Anfield appears secured but it will be a huge surprise to see the German between the sticks for the league opener against West Ham.

Simon Mignolet remains part of the first-team set up but the Belgian hasn’t played since January 1 and has implied his future lies away from Merseyside. The 30-year-old appears the most likely to be moved on to make way for the new man.

The search for a No.1 has been wide and varied since that night in Kiev but now a new name has emerged: Barcelona back-up Jasper Cillessen.

Our friends at Football Whispers assess why the Netherlands’ No.1 is a Liverpool transfer target and whether he could finally solve Klopp’s headache between the sticks

Four years ago Cillessen was starring for the Netherlands en-route to the World Cup semi-finals but, since then, has dropped off the map following an understandable but ill-advised move to Barcelona.

Swapping Ajax, where he was first choice for three seasons, for the Camp Nou in 2016 was a natural progression in his career and perhaps Cillessen thought Marc-Andre ter Stegen’s wayward performances would allow him to challenge the German. But the 26-year-old has been outstanding for the Catalans.

Fancy Nabil Fekir to move to Anfield? It’s 5/4 with RedsBet this summer

As a result, Cillessen has made just 21 appearances – 17 in the Copa del Rey – and his 20 caps for the Netherlands in the same period of time almost eclipse his club action. His desire to leave Barcelona is obvious.

At around £25million he represents good value and at 29 he is approaching peak age. With such precious little football over the last two years he has few miles on the clock.

Furthermore, he has 40 caps across a five-year international career, has played in a World Cup, the Champions League; the mere experience of being at clubs of the size of Ajax and Barcelona should ensure a significant mental strength and force of character.

Before delving into Cillessen’s qualities, it’s worth considering he probably isn’t the club’s first choice and fans may be disappointed interest in Roma’s Alisson, Gianluigi Donnarumma of Milan and Atletico Madrid’s Jan Oblak weren’t followed through.

All are younger, so instantly more exciting, and very current in the mindset of football lovers. However, it’s ultimately a matter of finance and realism.

Alisson looks set to join Real Madrid once Brazil’s World Cup concludes with Roma reportedly haggling over a fee around £60million. As ambitious as Liverpool are, spending that much against the backdrop of Madrid’s interest probably wasn’t an option.

Another target was Oblak. The Slovenian has been the best goalkeeper in La Liga for the past two seasons and as integral to Diego Simeone’s Atletico as Diego Godin or former Manchester United transfer target Antoine Griezmann.

That is reflected in how Atleti value him, which is rare given how little importance seems to be put on goalkeepers. But without Oblak, there would be a sizeable hole in Simeone’s team, system and gameplan. Several reasons why his contract contains a €100m release clause.

Donnarumma is the wildcard. The heir to Gianluigi Buffon’s throne as Italy’s No.1, the teenager has been a regular for Milan since the age of 17. However, for the past 18 months, he has been subject of unsavoury and messy contract negotiations, transfer rumours and will-he-won’t-he brinksmanship engineered by agent Mino Raiola. His form in 2017/18 suffered as a result.

As a hands-on and pastoral coach, does Klopp want that baggage as a backdrop to a young goalkeeper who, despite his rapid rise, is still learning his trade? The transition from Serie A to Premier League could take some time. As great as he may become, Donnarumma is a risk for a club looking to bridge the gap quickly.

The location from which Cillessen will be arriving provides an insight into what he’ll offer as the Dutchman is a strong passing goalkeeper, comfortable in possession, who can keep it simple or launch an accurate long ball.

His averaged 88.1 per cent passing accuracy in all competitions last year, including international football, and his long passing carried an impressive 64.3 per cent success rate. Eerily similar numbers to that of Karius (88.2 and 68.2) and Mignolet (88 and 64.3). 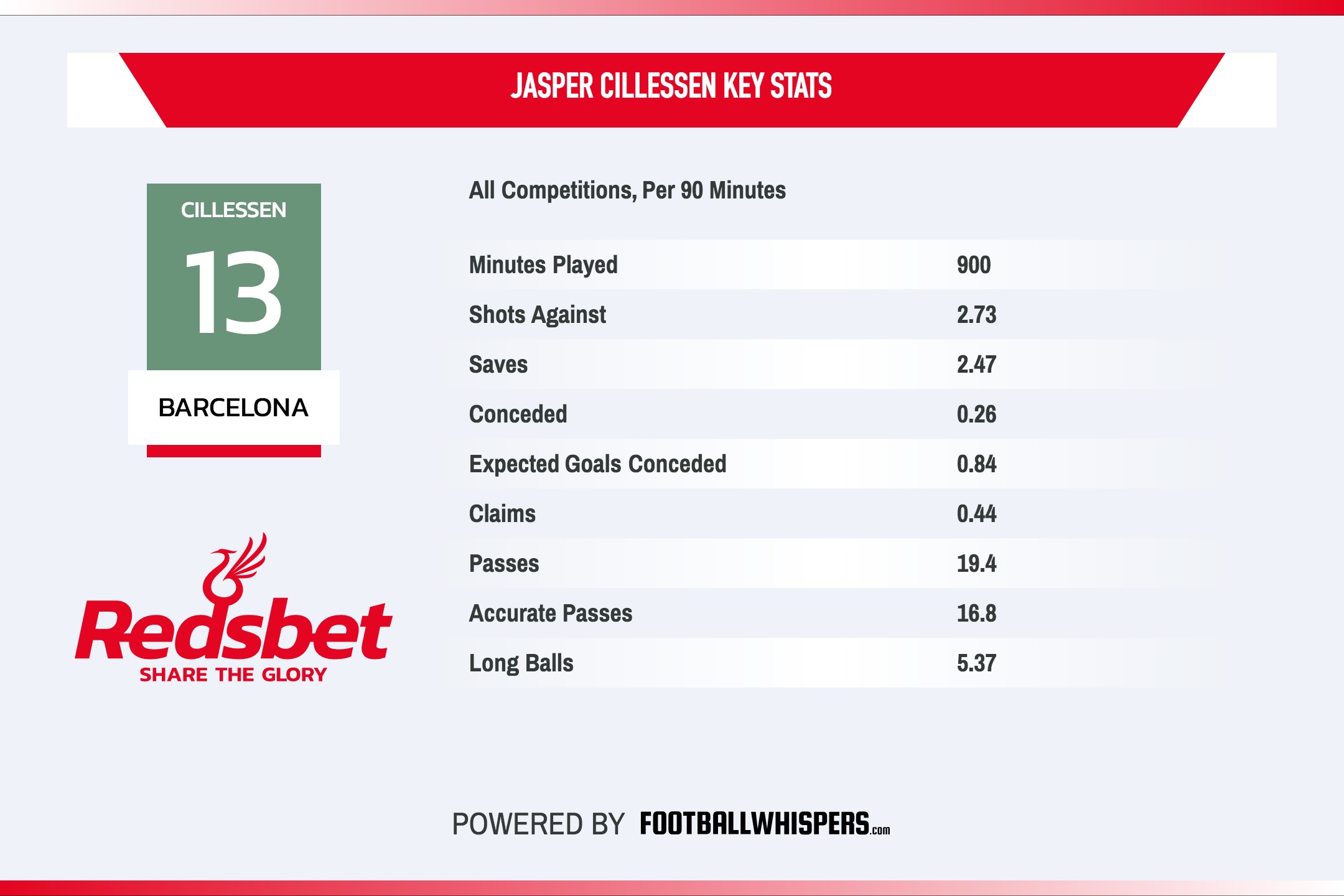 Playing in a dominant Barcelona side in cup competitions against lower-league opposition doesn’t present an accurate picture of Cillessen’s quality. But his passing alone suggests he should seamlessly fit into Klopp’s approach.

Where the red flag exists – and it’s a sizeable one – is his occasional inability at clutching crosses, often choosing to punch instead. He made 0.42 high claims per game in his final season at Ajax (the Eredivisie more relevant in this instance), Karius had 0.54 last term and Mignolet 0.63.

In the cross-heavy world of the Premier League, it’s a kink in his game he’ll have to iron out quickly or, in 12 months, Klopp and Liverpool may find themselves in a similar position.