Butland, Karius and Strakosha: Who is a Keeper for the Reds?

Liverpool have been linked with a host of goalkeepers, but who is the best fit?

Liverpool’s search for a new goalkeeper is threatening to turn into a bit of a rigmarole.

Loris Karius is the incumbent of the No.1 jersey, having displaced Simon Mignolet midway through the 2017/18 campaign, but reports suggest the Merseyside club haven’t been overly convinced with his performances and are still looking at alternatives.

The seed of doubt had been planted and it was a feeling many couldn’t shake.

Alisson is 39/20 to join Liverpool this summer with Redsbet

What happened against Real Madrid didn’t strengthen his cause, either. Doctors may have confirmed the German shot-stopper was concussed during the match after a collision with Sergio Ramos. But fans had already made their minds up, citing the mistakes against Roma in the semi-final to back up their point that he’s simply not cut out to keep goal for a club with title aspirations.

It appeared as though the club had its own reservations, too.

The search for a No.1

Various outlets, reliable ones, claimed Alisson was a Liverpool transfer target while reports in Spain suggested the Reds were lining up an audacious bid for Atletico Madrid stopper Jan Oblak. Murmurs of interest in Jack Butland have persisted since around December.

The Merseysiders have also been linked with Timo Horn, Alex McCarthy, Bernd Leno, Andriy Lunin and, well, most goalkeepers. Il Messaggero, not the most reliable of sources, recently claimed the Reds had a strong interest in Lazio No.1 Thomas Strakosha.

The 23-year-old had a breakout season in Rome and his performances caught the eye of many of Europe’s elite, with clubs seemingly eager to make plans for their future.

Still think Nabil Fekir will sign for Liverpool? He’s 23/20 to join this summer with Redsbet

However, it appeared as though Liverpool’s interest lay across the Italian capital. Brazilian media claimed Jurgen Klopp and the recruitment team at Anfield had signed off on a £60million deal for Roma No.1 Alisson.

English press refuted any suggestion of that with the Mirror claiming the Liverpool boss wasn’t interested in the keeper at such a price. If the Brazilian is too much then Oblak, who reportedly has an £89million release clause in his contract, is definitely off of the agenda and it indicates the Champions League finalists want a project between the sticks as opposed to a finished product.

So should Klopp make a move for one of Butland or Strakosha, or should he stick with Karius? Here, our friends at Football Whispers take a detailed look a the three goalkeepers. 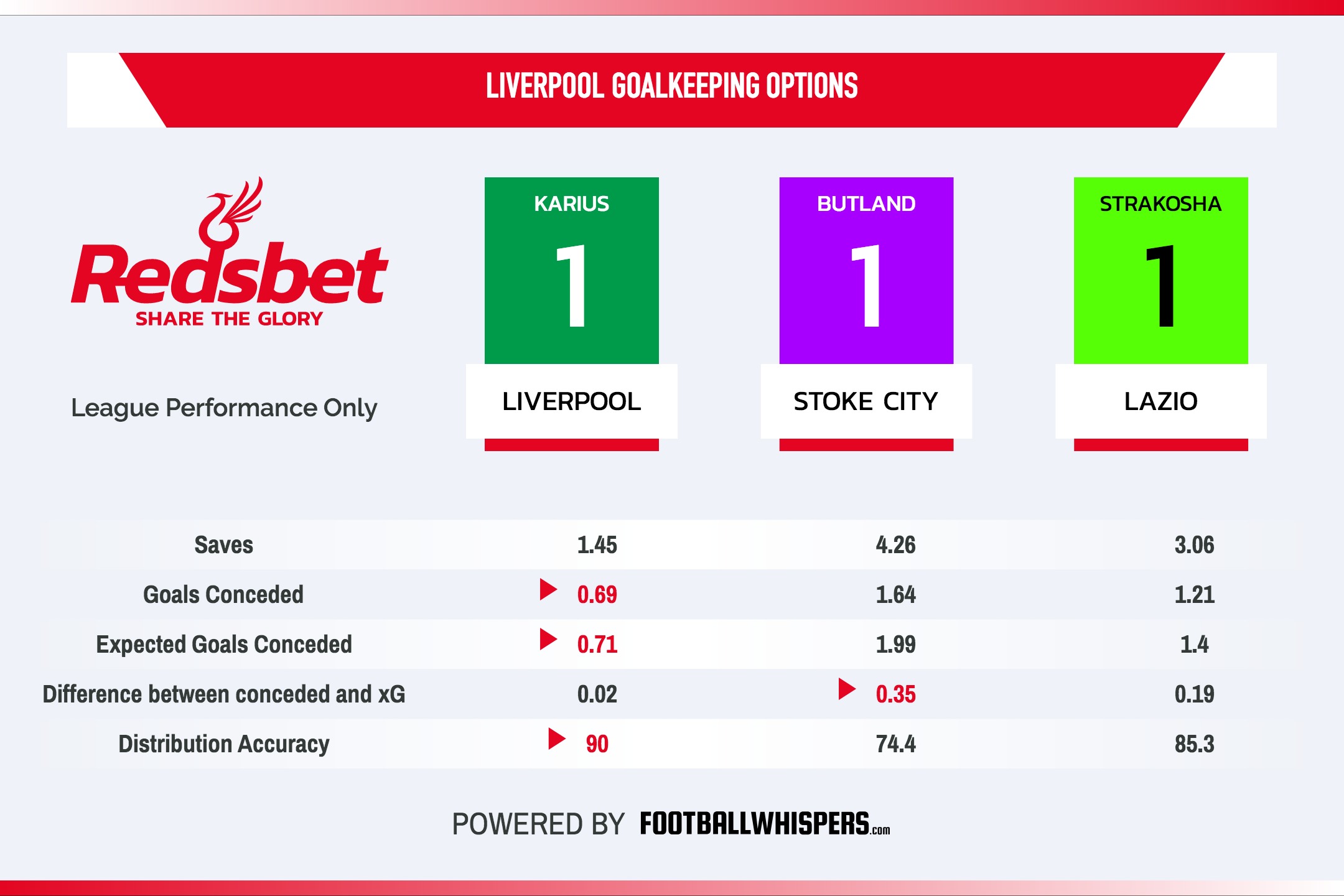 It’s easy to forget that Karius only turns 25 at the end of the month. The fact he also spent the best part of a season on the bench and his arrival was disrupted by an injury is often overlooked; he’s not had the easiest start to life at Anfield.

But, as previously mentioned, he did show glimpses in matches last season that he was a keeper who was ready to play for a side at the top of the table. He made big, match-changing saves, but his inexperience in the high-pressure games showed.

In the Champions League semi-final against Roma he just about got hands to an Aleksandar Kolarov piledriver to keep the ball out when it should have been a routine save. He also palmed the ball straight to Edin Dzeko for the Serie A side to equalise in the second leg. There was also a rashness to game from time to rime.

He’d rush off his life at the wrong moment and it would leave him, and the team, exposed. All are things that could be improved upon but the real question surrounding Karius is whether he’ll be the same, mentally, after the events in Kyiv.

The stats in the graphic above, in isolation, paint a picture of a keeper who isn’t tested frequently but when he is he’s par. Expected goals gives a value to shots by assessing where they were taken.

Last season he was expected to concede 0.71 goals on a per 90 minute basis but he was in fact breached on 0.69 times. He’s comfortably the best when it comes to distribution but that’s often dictated by the system he’s playing in.

The Stoke stopper was the busiest of the trio but that’s to be expected when playing for the leakiest team in the Premier League having conceded 68 goals during the 2017/18 campaign.

However, it is harsh to judge a No.1 on this because the side he’s playing behind is giving up high-quality chances on a regular basis. That wasn’t the England international’s fault.

The stats show he made a difference between the sticks, too. Stoke were expected to concede 1.99 goals per 90 minutes but Butland kept that figure down at 1.64.

It’s hard to judge how he would do in a side which wasn’t as exposed. He showed he could make something of an impact when he was busy but what about when he’s not called upon for the majority of the game. Is he capable of making those game-changing, match-winning moments when it matters most, or does he need to be busy to show his worth?

That will be the big question and at £40million it’s not something that should be gambled on.

Perhaps the most intriguing prospect on the list. His shot-stopping is – at times – unorthodox and he doesn’t look the most convincing. But the 6ft 3ins keeper gets the job done.

He played behind an open and expressive Lazio side that finished fifth in Serie A having scored the most goals in the league (89). They were breached on 49 occasions, though, the most in the top ten. But that wasn’t down to Strakosha. The system utilised by Simone Inzaghi exposed the defence, a bit like Brendan Rodgers ‘during 2013/14, and the keeper as always fighting fires.

While he conceded 1.21 goals on a per 90 minute basis, the Albania international made a difference between the sticks and it showed when looking at the xG conceded data.

Lazio are rumoured to want in the region of £20million for their keeper. If the Reds want a project then they should be taking a closer look at Strakosha. There’s enough there to suggest if he’s nurtured properly he could become an imposing figure between the sticks who is reliable when called upon.

Not only that, he’s comfortable with the ball at his feet. He’s the best bet of those on the list.