Anfield is ready to play host to international football for the first time in eleven years as Brazil and Croatia visit for a World Cup warm up.

It’s the first time since 2006 that international visitors have had the opportunity to play in front of the Kop. Last time out, England defeated Uruguay 2-1 in a friendly. Goals from Joe Cole and then Red Peter Crouch saw England come from behind. But since then there has been a paucity of such events at the stadium. There have been more international matches played at Loftus Road and Craven Cottage since then, in fact.

So, to have one of the biggest names in world football on our doorstep is something to enjoy. Brazil will be one of the favourites for the 2018 World Cup in Russia and with less than two weeks to go before the big day, they will seek to step their preparations up as they take on Croatia. Manchester City striker Gabriel Jesus has been named as the Brazilian captain for this match.

Of course, this match is that touch more special due to the numerous Liverpool connections. Both Roberto Firmino and Dejan Lovren will find themselves in extremely familiar territory. Former talisman Philippe Coutinho will be making his first Anfield return since his unsavoury big money move to Barcelona in January. Depending on the demograph of what should be a decent sized crowd, Coutinho might expect an uncomfortable afternoon as his lack of loyalty will not easily be forgotten nor forgiven.

As an additional bit of interest for watching Reds, Roma goalkeeper Alisson has been named as the starting goalkeeper for this match. With links to Liverpool intensifying in the last week, this will be an opportunity for fans to run the rule over the 25 year old. With a reported price tag of £60m, it’s fair to say that Alisson is going to attract attention. It will certainly be interesting to see if the Brazilian looks a better prospect than he did in the 5-2 defeat in April when Roma were blown away in a Champions League semi final. 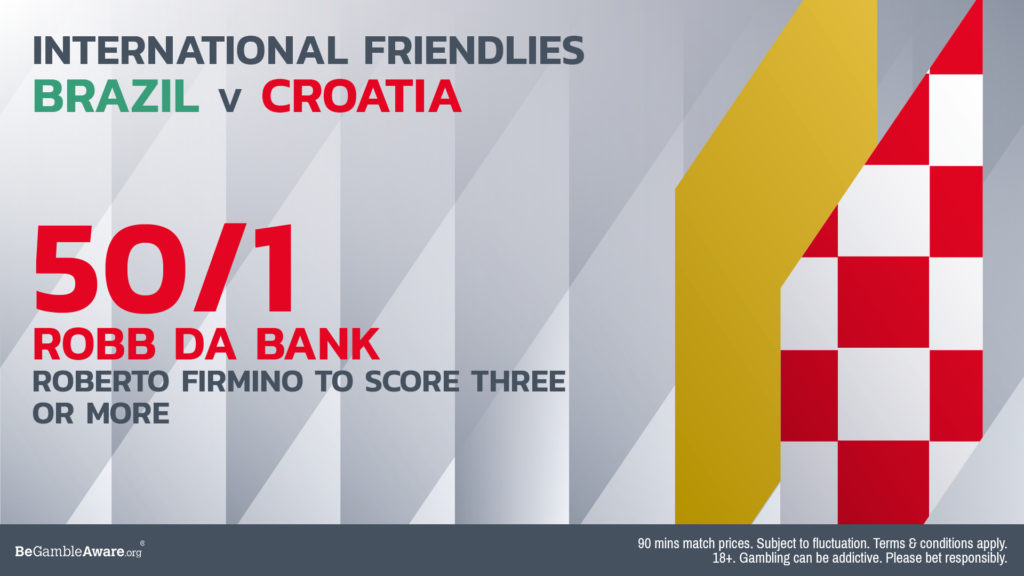 As popular as he might be at Anfield, Roberto Firmino is somewhat down the pecking order in the international set up and he’s only expected to make the bench for much of the World Cup. I would expect him to get some game time in this match though as Brazilian coach Tite looks to get all of his squad tournament ready. Fancy Firmino to Robb the Bank? He’s 50/1 to score three or more.

Of course, when Brazil are in town they attract most of the attention. Even though there is no realistic proposition of Croatia getting much beyond the last 16, they have some fantastic players. As well as one of my favourite kits, they boast the likes of Mario Mandzukic, Ivan Rakitic,, Ivan Perisic and one of my favourite midfielders, Luka Modric.

They don’t give much away and that is why they are so difficult to play against. And they have a central midfield which is the envy of a lot of countries. Croatia are 7/1 to win the game to nil and if you really want to push the boat out, you could write a real Lov Story at 375/1 if Dejan Lovren scores first and Croatia win 1-0.

The Liverpool centre half has only scored two goals for his country but did net a powerful header at the Kop end the last time he played at Anfield as the Reds demolished Brighton 4-0.

My prediction is for Brazil to win 3-1 and for Coutinho to score the opener.

Even though this is a friendly and will be played at such a pace, there is more than enough quality on display for this to be a very enjoyable game of football. Six or more goals is 11/1 and it will be interesting to see the return of Neymar. The Brazilian icon is stepping up his return from injury and will be coming off the bench in Sunday’s game.

From a wider point of view, hopefully this is the first step to an increased number of international games at Anfield. With an increased capacity and the wonderful new Main Stand, the club has had more events such as Rugby League international matches. It would be nice to see more prestige events at a stadium that certainly deserves it.