The Brazilian has shown he's worth his price tag already.

Aside from one calamitous error, an overly confident attempt to dribble the ball out of his box against Leicester, Alisson has been imperious in goal for Liverpool this season. Their £67m investment has proved a wise one.

It is not a coincidence that Liverpool’s defensive record has improved so significantly since Alisson’s arrival. He is an excellent shot stopper and (usually) comfortable with the ball at his feet, but he has clearly had an impact on Liverpool’s back four, too.

Alisson is an assuring presence, and this has allowed those in front of him to focus on doing their jobs, instead of worrying about an imminent mistake from their goalkeeper. It has been an impressive start to the season for the Brazilian.

Our friends at Football Whispers take a look at why Alisson is starting to make a claim to be the best goalkeeper in the Premier League.

There was, inevitably, pressure and expectation when the 26-year-old joined from Roma. The fee was a record for a goalkeeper – until Chelsea signed Kepa Arrizabalaga – and Liverpool fans had been impressed by his performances at the World Cup.

There was an assumption that a goalkeeper acquired for such expense would be unflappable, immune to mistakes. That is the impression Alisson gave in his first appearances for Liverpool: taking his time in possession, saving every shot that came his way. He looked confident and composed, a refreshing change for Liverpool given their well-documented issues with goalkeepers.

The best way to learn?

Alisson did not concede a goal in his first three games. Everything had gone to plan. But then came the mistake. He attempted to dribble past Leicester’s Kelechi Iheanacho, who dispossessed him and squared for Rachid Ghezzal to score.

There was criticism in the aftermath of the error, but Alisson has since made sure there is no repeat. He takes fewer risks on the ball. He does not try to do something unnecessarily flamboyant. In the end, that mistake against Leicester could prove beneficial. After all, mistakes are often the best way to learn. 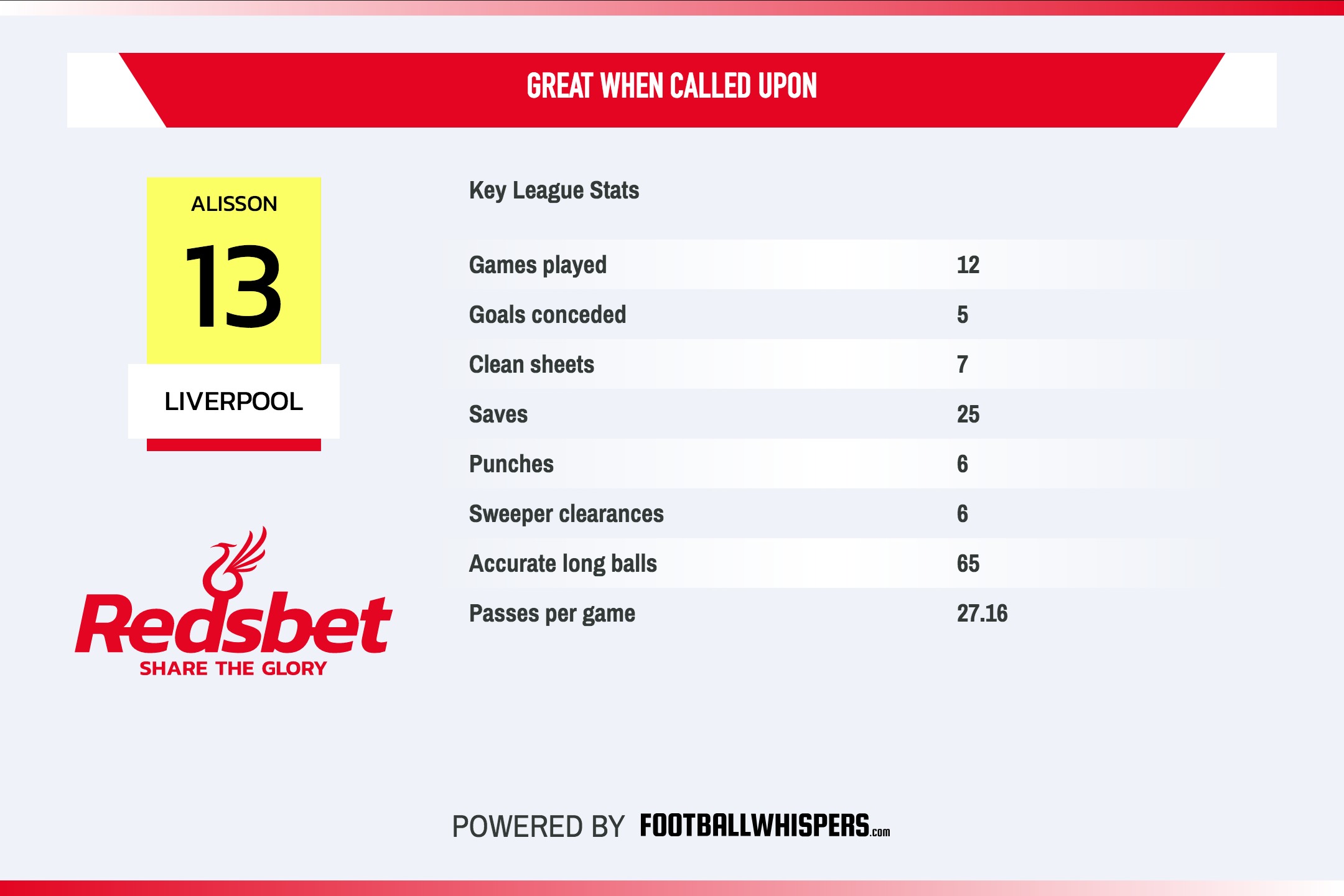 “It is really early to say if I’m satisfied with how I’m playing but I’m working to be perfect,” Alisson told BBC Sport earlier this month. “The Premier League has great intensity, you have to be really focused all the time. One thing that is important here is the concentration and focus. They are asking me to be really mentally strong.

“My team have a really great defence so it is not often the ball comes near my net. But I have one or two opportunities to show my quality, so I need to be focused all the time.”

Part of a team

Alisson’s observations are correct. He makes comparatively few saves when looking at the division’s other goalkeepers. But that is because of the effectiveness of Jurgen Klopp’s system, which has expertly restricted opposition this season. Liverpool have conceded only five goals in 12 league games and Alisson has kept seven clean sheets.

The Brazilian has made 25 saves in the Premier League so far, at a rate of 2.08 per 90 minutes. It does not mean he has been a bystander, though. His contribution, as is often the case with the best goalkeepers, goes beyond keeping out the opposition.

He makes an average of 27.16 passes per 90, with a completion rate of 80.9%. His ability on the ball gives Liverpool’s players another option when trying to play the ball out from the back. And, like his compatriot Ederson at Manchester City, Alisson has shown a proficiency for picking out teammates with accurate long balls.

Liverpool to win Champions League or Premier League,
WAS 3.50 NOW 4.00*

“To build the game from the beginning, from the goalkeeper. That’s so important,” Alisson has said of Liverpool’s approach.

Like most of his teammates, Alisson has slotted seamlessly into Klopp’s system. He has adjusted well to a new league, a new club, and there is little to suggest that he will not continue to improve.

The aim, as he puts it, is “perfection”. After some shaky moments in the early days of his Liverpool career, Alisson might have been laughed at for such a comment. Now, though, it does not seem so unrealistic.

Liverpool invested a lot in their new goalkeeper, but they will not be disappointed with what they have got. They can, in Alisson, boast one of the Premier League’s most accomplished players in the position.

Liverpool to beat Watford and keep a clean sheet, 2.60*