Mike Nevin previews the heavyweight clash of the weekend as The Reds travel to the Emirates.

The Reds travel to the Emirates on Saturday for another stiff examination of their title credentials.

Thus far Jurgen Klopp’s men have kept pace manfully with the Manchester City juggernaut but with City running out relatively comfortable winners against Spurs on a dog of Wembley pitch on Monday evening, the margin for error in this Premier League remains as slim as a cigarette paper.

In another season, or perhaps during a different era, Liverpool’s start to the season would have the Reds installed as firm favourites by now.

When Liverpool were perceived as utterly dominant in Bob Paisley’s halcyon days, as little as 80 points from 42 games (in 1983-84) was enough to see red ribbons adorn the trophy in May. Without decrying the achievement of the Reds’ most heralded greats; the likes of Kenny Dalglish, Graeme Souness and Alan Hansen might reflect that runners-up in the shape of Ipswich Town, Watford and Southampton during a championship treble paint the picture of a much-changed domestic football landscape.

However, these are vastly different times and eight wins and two draws from the opening ten games merely preserve the status quo at the top of the table in a league where favours and genuine competition from the middle and lowest ranking teams are in short supply. That Liverpool are on a par with Manchester City with more than a quarter of the campaign done and dusted is testament to the grit and determination of a Klopp side which has evolved quickly from mercurial entertainers into a miserly unit which can grind out results without hitting the aesthetic heights of which we know they are capable.

This season remains a war of attrition; a battle of will and psychology. For every time City – and to a lesser extent Chelsea – strike another blow to the heart, the same applies to our rivals when Liverpool gather another three points. In the mind of Pep Guardiola and Maurizio Sarri the Reds’ relentless consistency will be a concern to match Liverpudlian frustration at being unable to secure a lead in the championship race. In particular, City fans have created an boorish anti-Liverpool songbook that points to their own insecurities and suggests we have them rattled. The same diffidence might not yet extend to Guardiola’s dressing room but football has a funny way of transmitting doubts on the terraces on to the pitch.

To put the difficulty of the weekend visit to Arsenal into a general context, Liverpool have won just two of their last eighteen away league fixtures against the Gunners so nothing can be taken for granted. Nevertheless, there is an acute sense this Liverpool team is at it’s best when stretched by better opposition.

Arguably the most impressive Reds’ performance this season came at Stamford Bridge when the cut and thrust of a game played at an unrelenting tempo saw Liverpool carve out chances aplenty in pursuit of an equaliser.

The Gunners themselves seem refreshed under the new regime brought by former Paris Saint Germain boss, Unai Emery. Arsenal, recovered from losing their opening two fixtures to City and Chelsea, are unbeaten in 12 matches.

Emery’s arrival has erased the acrimony felt in the latter years of Arsene Wenger’s dynasty. In many ways it was sad to witness the strife and in-fighting among supporters caught between loyalty to a man who delivered Arsenal’s greatest modern achievements and the inertia of the death throes of his tenure. The standards set by Wenger in the shape of two league and cup doubles in 1998 and 2002 and the unbeaten Invincibles campaign of 2004 eventually caught up with a Premier League visionary who was unable to sustain domestic dominance or a meaningful assault on Europe. 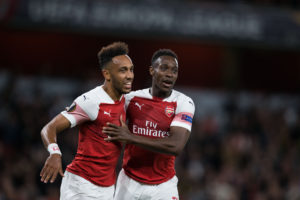 Arsenal’s unbeaten run under their new man has been characterised by the open attacking football that was Wenger’s blueprint but with a noted flimsy streak at the back already exposed by the vain attempts of both West Ham and Watford at the Emirates. Emery has been indebted for results to the form of Alexandre Lacazzete and Klopp’s former Dortmund charge, Pierre-Emerick Aubameyang up front, but the promptings of Mesut Ozil and Aaron Ramsey in midfield remain critical to Arsenal’s fluency.

Klopp will look to take the game to Arsenal but will likely revert to a solid midfield after a brief flirtation with a 4-2-3-1 formation. With fitness doubts still surrounding Jordan Henderson and Naby Keita, James Milner is an obvious candidate to return and sure up the centre with the emerging prowess of Fabinho and Gini Wijnaldum. The manager will rely on his tried and trusted front three of Mohammed Salah and Sadio Mane – both back among the goals – plus the foraging of Roberto Firmino to create the spark and seek out all three points in this taxing battle for supremacy at the summit.

Red Star Belgrade: Everything you need to know