It’s easy to look at Alisson’s chip over Brighton’s Anthony Knockaert and either revel in the audacity of the move by or deride it for its recklessness.

The whole nature of the goalkeeper position is one of safety and as great as it looks as a GIF or on FIFA, it has no place on a professional football field.

But that debate is completely missing the point because as Jurgen Klopp pointed out in his post-match press conference, as flashy as it was, it was born out of necessity not showmanship.

Virgil van Dijk’s back-pass was slightly under-hit, the Dutchman perhaps not appreciating just how quick Knockaert is as the Frenchman bore down on Alisson. But with a flick of his right boot, the Brazilian sliced under the ball for it to lift over the Brighton winger before placing it under control and returning it to Van Dijk.

The obvious decision was to smash it up field first time but that would have risked Knockaert potentially charging down the clearance to create a goalscoring opportunity. He may have turned a threat into a piece of theatre but it was what required to maintain his third clean sheet in as many Premier League games.

Our friends at Football Whispers look at the Brazilian’s stopper’s distribution and why it could be so important for Liverpool this term.

Alisson is no Rene Higuita, Colombia’s goalkeeper during their early-90s golden era. Long before he was scorpion kicking at Wembley, Higuita had trademarked the art of coming out of his goal and dribbling the ball forward.

Often to great effect – as Pep Guardiola will testify to given how much he subscribes to the idea of effectively having 11 outfield players – but often with chaotic results as Higuita’s antics became about him dallying in possession and trying to take on forwards, rather than doing what was necessary at the time.

Alisson’s ability with the ball at his feet also represents a stark departure from the days of Simon Mignolet and Loris Karius and further highlights just why a then-world record fee of £66million was paid to bring him to Anfield from Roma. 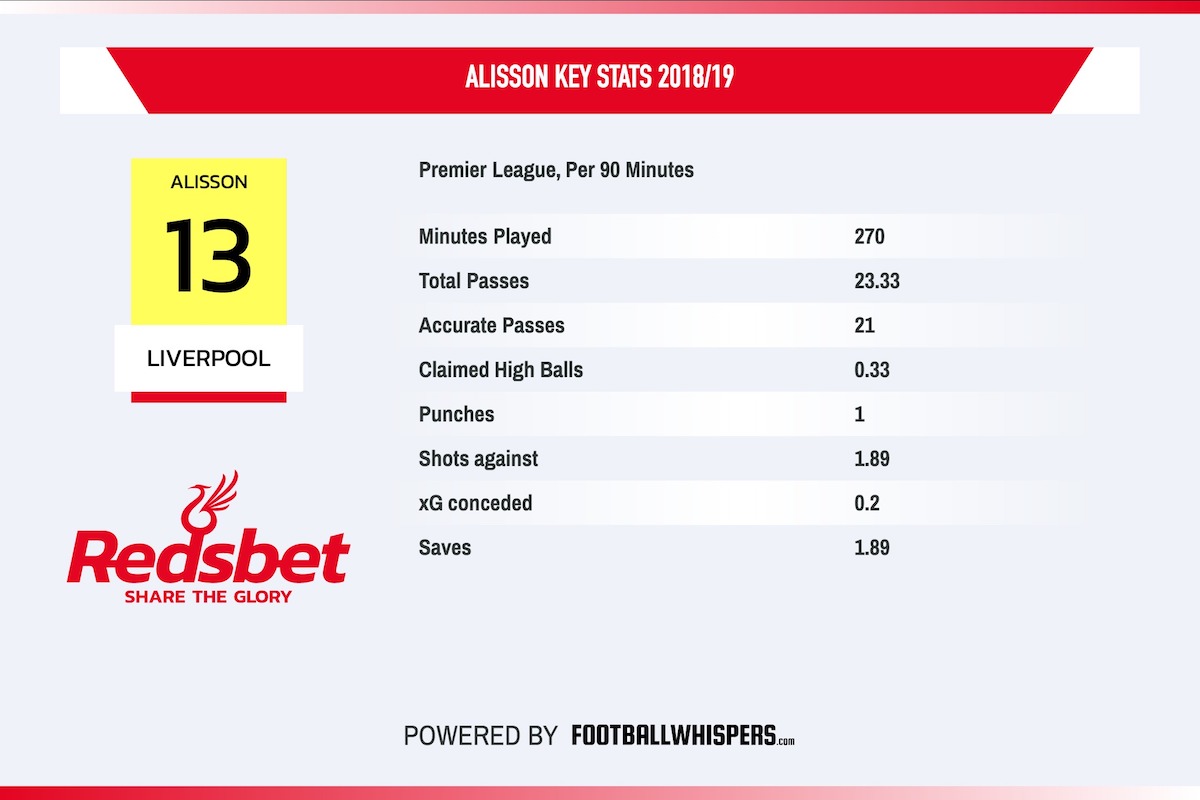 Karius’ first mistake in the Champions League final against Real Madrid came as the German hurriedly tried to release the ball and launch a swift counter-attack with the Spanish side theoretically out of position and more vulnerable than if he hung onto it.

Except Karius is not that kind of goalkeeper. Good with his feet to a point but perhaps lacking the composure and natural ability to play that way. His bungled clearance into Karim Benzema a devastating reminder of this.

Which is why his arrival in Merseyside is so key and, relative to what Liverpool need, the vast fee was understandable.

Klopp’s gegenpress is demanding on his forward players and only some can play it properly. Daniel Sturridge has had his injury issues but he’s simply not as effective without the ball over 90 minutes as Roberto Firmino, Sadio Mane or Mohamed Salah.

Likewise, the need to move the ball quickly upfield is also important and some goalkeepers aren’t able to do it with any great conviction or accuracy.

Just like strikers have to do more than just score and defenders must go beyond tackling, heading and blocking, in the modern age goalkeepers’ responsibilities are changing – Alisson and Ederson personify that shift.

As simple as it sounds in spelling it out, having a goalkeeper who can use his feet helps retain possession, move opposition players around the field at a greater rate and also give defenders another outlet to pass to, one which was previously considered a negative step. 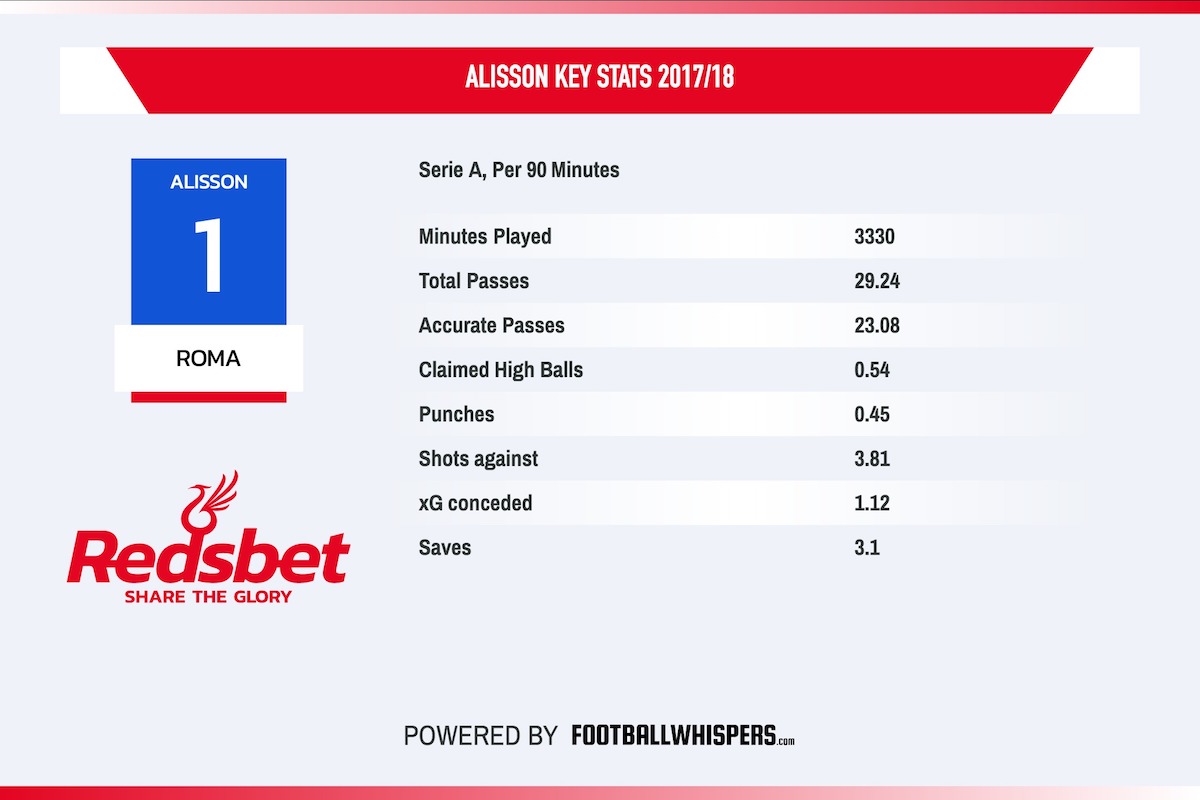 Alisson leads all Premier League goalkeepers for pass accuracy at 90 per cent and is 30th overall in the league, sandwiched between N’Golo Kante of Chelsea and Wolves’ Ruben Vinagre. That alone is testament to how well he’s used the ball so far this season.

To further highlight his qualities, Mignolet averaged 69.5 per cent in the Premier League last season and Loris Karius stood at 67.2.

That may only add up to around five or six more passes reaching their intended target but it changes the overall complexion from a defensive point of view because that’s five or six possessions not being surrendered back to the opposition, putting you on the back foot.

Liverpool under Klopp are a front-foot team, even more so than Manchester City. The German’s manager’s style compels forward momentum whenever they have the ball. In Alisson they have a goalkeeper who can dictate that.

Whenever the opposition’s attack breaks down, Salah, Mane and Firmino know if they make the runs, Alisson can find them with his hands or feet. The knock-on effect is that can make teams reconsider how many men to commit at set-pieces or in open play, another benefit to the Reds.

It’s still early days and Alisson has many tests lying ahead, including more forwards bearing down on him, but the numbers speak for themselves: three clean sheets and a pass efficiency worthy of one of Europe’s best midfielders.

Gomez out for the season after ankle surgery