Will Jurgen Klopp move for one of these prospects?

World Cups aren’t necessarily the deciding factors in a club’s transfer policy anymore, proper scouting has seen to that. But the tournament does still serve as a helpful indicator as to which players are able to perform under pressure on the biggest stage.

It’s no secret Jurgen Klopp is in the market for significant reinforcements this summer as he looks to build on Liverpool’s run to the Champions League final by turning them into credible Premier League title challengers.

Our friends at Football Whispers have identified some of the individuals we’ve seen so far in Russia who could be a good fit for the Reds for 2018/19. 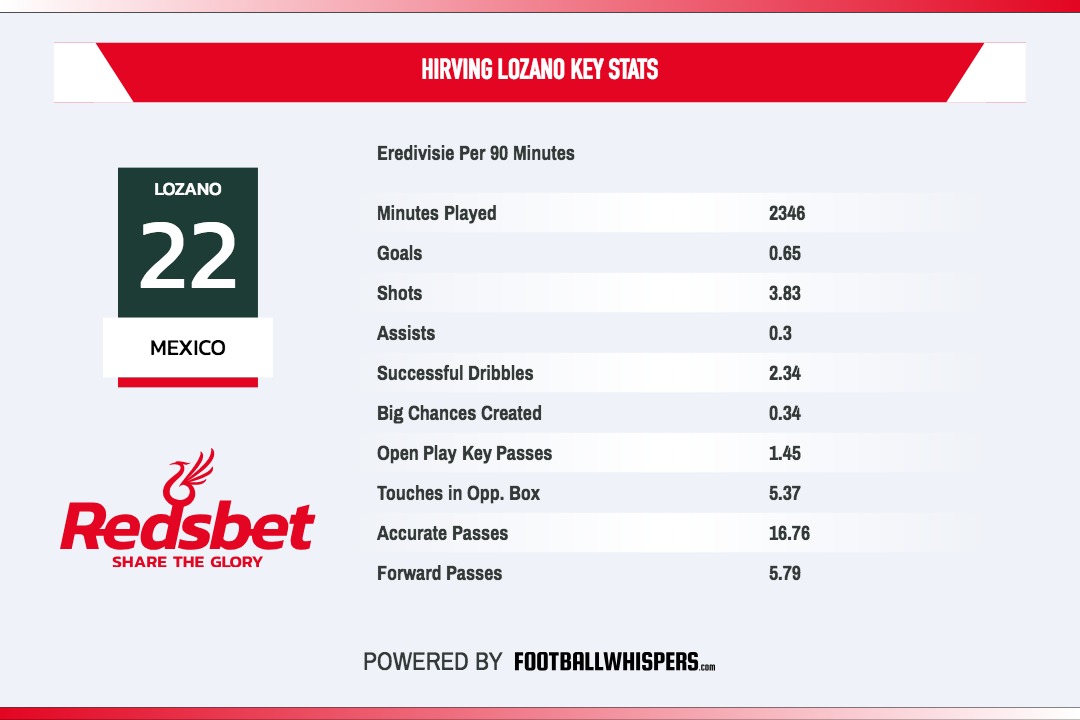 No World Cup team has screamed Klopp’s Liverpool quite like Mexico so far, and no player has felt more of a natural fit than Lozano.

The PSV forward tormented Germany in their Group F opener with his pace on the counter and pressing when not in possession. It was all so quintessentially Klopp.

As well as scoring a smartly-taken winner, cutting inside and drilling the ball inside the near post, Lozano also completed four dribbles, delivered three key passes, won three tackles and made two interceptions for El Tri.

In the 65 minutes he was on the field the 22-year-old also had 41 touches – more than seven members of the starting XI. His 91.3 per cent pass accuracy was also the best of all 14 players used by Mexico coach Juan Carlos Osorio and exceptionally high for an attacking player often attempting risky passes.

If Klopp is looking for a fourth option in his three-man attack or, hypothetically speaking, a potential replacement for Mo Salah or Sadio Mane if Real Madrid or Barcelona come calling, Lozano looks ideal.

His 138 minutes per goal in the Eredivisie only adds to that notion while Dutch clubs, relatively speaking, don’t command as exorbitant fees as other European leagues. 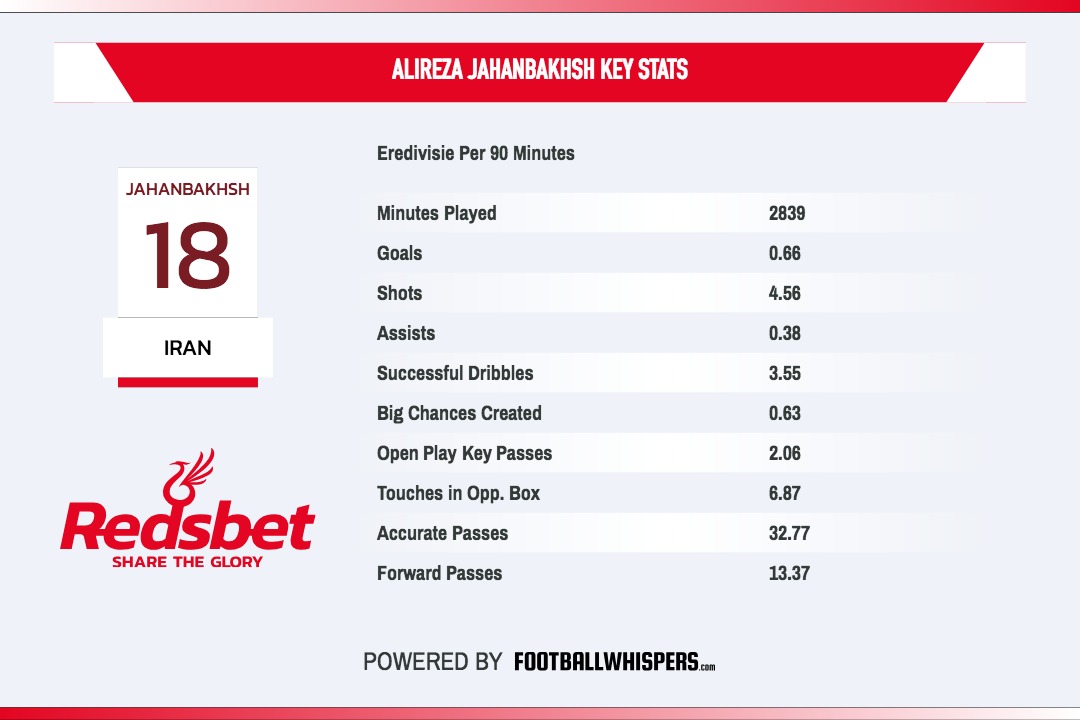 Another Dutch-dwelling wide forward who looks tailor-made for Klopp’s system and style of play at Anfield is Iran’s Jahanbakhsh. He didn’t quite produce the blockbuster display of Lozano but showed glimpses of his suitability in a different way.

The 24-year-old was one of the most devastatingly effective wingers in the Eredivisie for AZ last season, scoring 21 goals with 12 assists and was a top-ten ranked attacker for big chances created per 90 (0.63), successful take-ons (3.55), touches inside the opposition penalty area (6.87) and total scoring attempts (4.56).

However, at international level, with defensive disciple Carlos Queiroz as his boss, his role is more subdued. As it showed against Morocco where he was largely ineffective in attack and a little wasteful in possession – just 62.5 per cent pass completion and three turnovers – but performed an admirable effort for his team.

Jahanbakhsh completed four tackles – more than any other Iranian player – and two interceptions, almost operating as a second full-back at times. The opponent he was tasked with stifling, Real Madrid’s promising full-back Achraf Hakimi, managed just one cross, one dribble and was dispossessed seven times. Any threat Morocco posed from the left proved largely ineffective.

It was a frustrating afternoon as he provided little in the final third and frequently cantered forward only to be left waiting for the ball. But each time, there he was sprinting back to cover.

It’s not always been an overriding attribute within his game, and certainly wouldn’t justify the €25million he may cost, but it speaks of a willingness to sacrifice his own performance for that of the team and adhere to a coach’s gameplan.

Factor in his production for AZ and he could be a very appealing addition to any Premier League club with Brighton long-term admirers having tried to sign Jahanbakhsh when he moved from NEC to AZ. 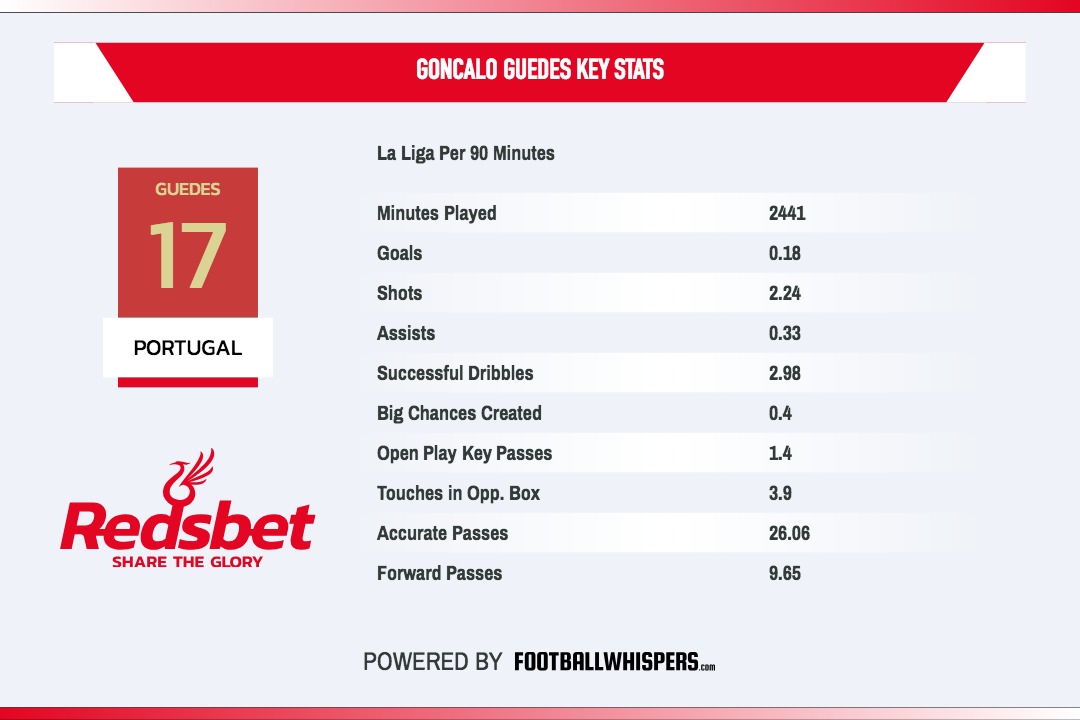 A surprise name in the Portugal starting XI for their Group A headline game against Spain was 21-year-old Guedes who earned only his 11th cap and fifth as a starter.

His two-goal showing in the final warm-up against Algeria may have ensured he got the nod of Andre Silva to partner Cristiano Ronaldo but what was also clear in coach Fernando Santos’ thinking was the 21-year-old’s pace against a potentially sluggish Spain defence would be key.

The considerable qualities of Sergio Ramos and Gerard Pique do not stem from their pace and Guedes’ acceleration was an asset Portugal sought to exploit. However, unfortunately, the PSG forward experienced an off-day.

Santos’ plan was perfect as twice Guedes and Ronaldo broke in transition and stretched the Spanish. On the first occasion the youngster fell into Ramos’ trap and was forced too wide after a purposeful 50-yard dribble. The second time he wasted a good inside pass by Ronaldo, taking too many touches before his shot was blocked.

In should be noted, however, he did provide the assist Ronaldo for Portugal’s second goal as he controlled Cedric’s long diagonal with his thigh before playing the ball inside with his second touch.

On the other side of the ball, he tracked and pressed to an extent but didn’t win the ball enough to truly justify his inclusion in that regard with just one tackle all match, while he was caught out of position at least twice, allowing a Spanish player to dribble past him.

But this is a very small sample size, against elite opposition, at the start of his international career to properly judge. Guedes was, at times, scintillating for Valencia last season.

He may not be as much of the finished product as Lozano or Jahanbakhsh but potentially has the higher ceiling, which is why, added to his status as a PSG player, he would be expensive. 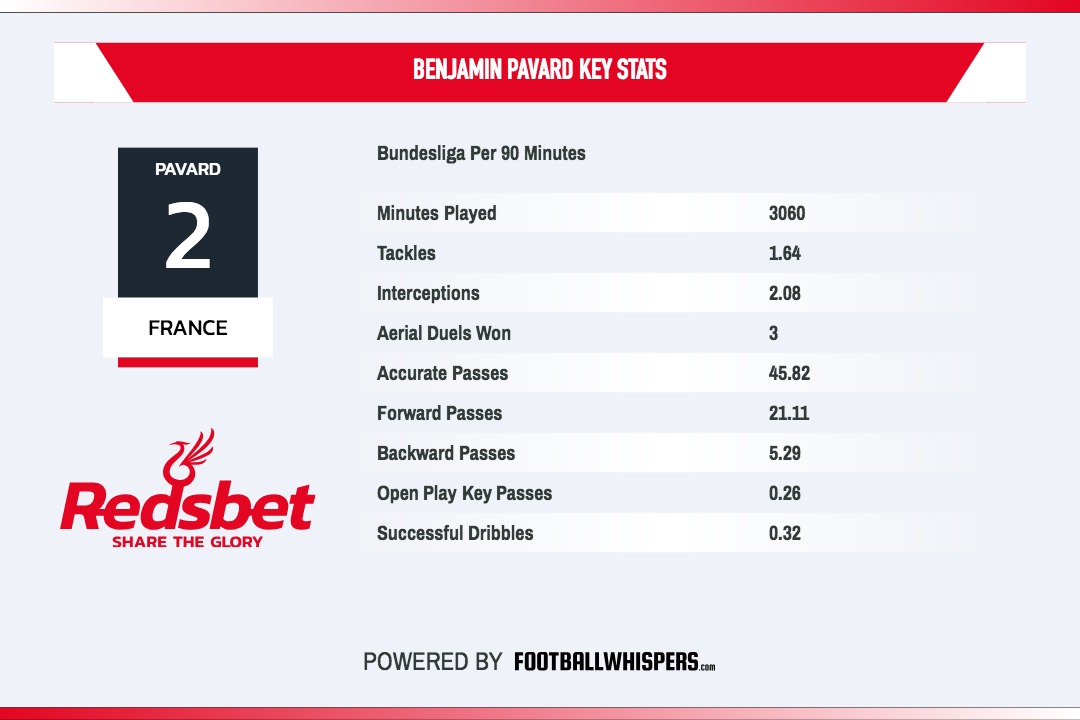 Flexibility is not something Klopp possess among his defenders. His centre-backs are, well, centre-backs and his full-backs, at best, can push forward into midfield. But in Stuttgart’s Pavard he would find a young, promising defender who looks equally capable of operating in the centre as he does on the right-hand side.

The 22-year-old was one of the outstanding centre-backs in the Bundesliga last season, earning his place in Didier Deschamps’ final 23 but with Raphael Varane and Manchester United transfer target Samuel Umtiti ahead of him, forcing his way into the XI was going to be hard.

It speaks of Deschamps’ faith in his ability that he handed Pavard his seventh cap against Australia at right-back and, although the Socceroos’ didn’t offer much in an attacking sense, he delivered a performance to suggest he’ll keep his place against Peru.

He certainly saw plenty of the ball, enjoying more touches than any other player on the field (86). And while his passing could have been more efficient with just a 75.4 per cent accuracy, there was one telling through-ball to Kylian Mbappe inside the first two minutes and some bright moments.

Defensively, he made all three of his attempted tackles and didn’t permit an opposition player to dribble past him, although he did commit four fouls.

Perhaps it’s an indicator of Deschamps’ inert conservatism that, even against Australia, he chose to field a primarily defensive player at full-back when Djibril Sidibe would have been a more exciting option.

But it’s a role Pavard will surely grow into and we’ll get a better judge of his ability further into the tournament as his status as a centre-back for Stuttgart cannot be questioned.

He made 34 appearances for the Bundesliga’s second-best defence and impressed with his composure on and off the ball and an ability to read the game, as his 2.08 interceptions per 90 was 14th among all defenders

Pavard would be expensive, something approaching £35million, but has all the tools to be a very exceptional defender and the potential long-term partner to Virgil van Dijk at the heart of defence. 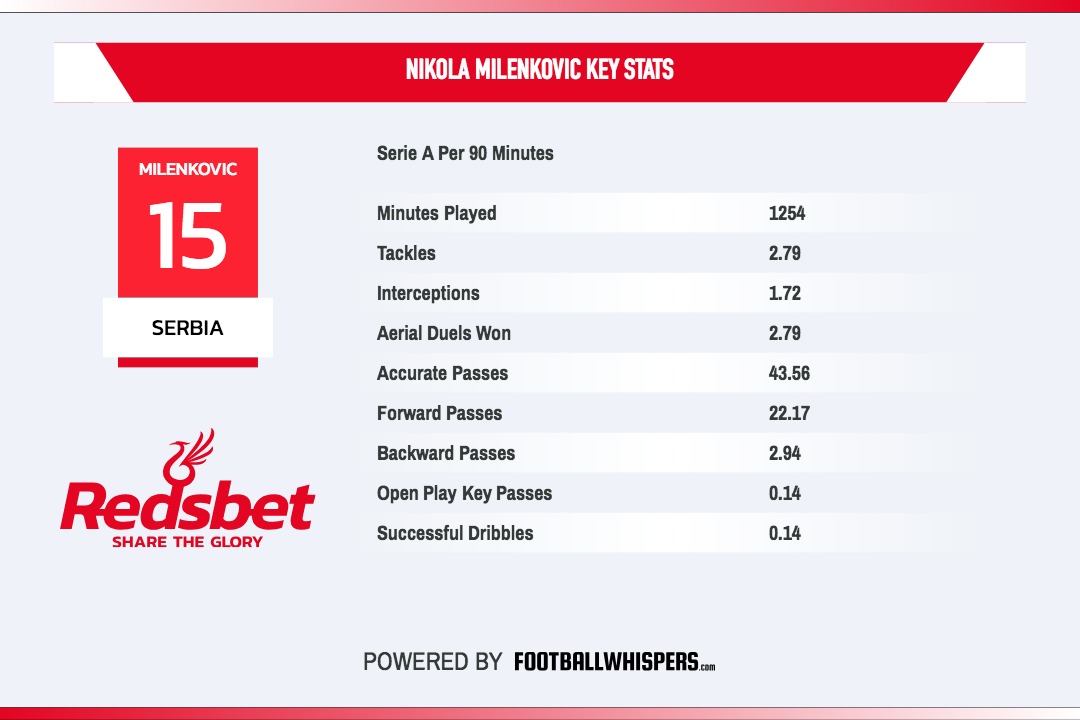 A more traditional potential defensive addition is robust Serbian centre-back Milenkovic who proved a powerful presence in their opening win over Costa Rica, albeit against a team who presented little attacking threat.

How much of that was down to Milenkovic and the rest of the back four is a matter of debate. But it was a near faultless display from the 20-year-old who won all three of his headed duels, three of his four tackle attempts and showed considerable patience and discipline.

Rarely did he lose his positional sense to dive in and force the issue, instead picking his moment to win back possession and then play the ball simply to one of his team-mates. His 89.6 per cent passing accuracy was second only to Nemanja Matic (91.7), while he enjoyed more of the ball than anyone else on the field with 62 touches.

Given he is just 20 and was winning just his fourth international cap it is testament to his character that he can run the defence in such a manner, even if the opposition was the relatively modest Costa Rica.

Serie A tends to be a fantastic finishing school for defenders and his 16 appearances for Fiorentina have clearly served him well, even if more pressing assignments lie on the horizon with Brazil on June 27.

In Italy’s top flight he was ranked tenth among all centre-backs for aerial duels won per 90 minutes (2.79) and fourth for tackles completed (2.79), which is a solid indicator of his best attributes.

La Viola certainly wouldn’t want to give up such an asset without a fight and should any suitors entertain bidding for him expect his price to be north of £30million, but early signs indicate that Milenkovic could be a serious long-term investment.

2018 WORLD CUP TEAM OF THE TOURNAMENT