Ahead of the crucial second leg in the round of 16 against Bayern Munich, we look at five ways Liverpool can beat the Bundesliga leaders.

Liverpool travel to Bavaria in a tricky position as they look to progress into the quarter-final of the UEFA Champions League.

The Reds failed to make the breakthrough at Anfield, despite a flurry of missed chances, and head to Germany with nothing to defend.

With that in mind, does Jurgen Klopp look to blitz Niko Kovac’s men early on to grab an away goal or does he instruct his team to sit deep and pick the hosts off on the counter? Both approaches have their merits. Both have their drawbacks.

But with Real Madrid and Paris Saint-Germain already out and Juventus needing to overcome a 2-0 first leg defeat to Atletico Madrid in order to progress, Liverpool, if they beat the Bundesliga champions, would be one of the favourites to lift the Champions League.

While some may feel as though a run in Europe’s elite competition may hinder the title challenge, the Reds shouldn’t put all of their eggs in one basket. Especially not when the competition is a winnable one.

With this in mind, we’ve taken a look at five ways in which Liverpool can beat Bayern Munich.

In big European away matches, Klopp has favoured a midfield three made up of James Milner, Jordan Henderson and Gini Wijnaldum. The Reds have struggled to assert their authority in those matches with that midfield dynamic, despite it doing a job in home ties.

The Liverpool boss needs to resist the temptation to play those three in the middle third in the Allianz Arena. With Fabinho impressing as the anchor, Naby Keita fresh after sitting out multiple matches and Adam Lallana back up to speed after his man-of-the-match showing against Burnley, Klopp now has options.

Liverpool are at their devastating best when they’re playing on the counter. They may have transitioned into more of a possession-based outfit this season to combat teams sitting deeper but a number of their standout goals this season have been quick breaks with the team going through the gears in a matter of seconds.

With the onus on Bayern to take the game to the Reds, there should be ample opportunities for the away side to make the most of Sadio Mane’s and Mohamed Salah’s speed. But this may not be the pattern of play from the off.

The home side will want to dictate the tempo meaning Liverpool players will have to bide their time and wait for the perfect time to spring the counter.

Bayern have been scoring freely over recent weeks, netting 11 goals in their last two Bundesliga matches, but it’s the Spanish destroyer who has been one of the teams better players.

He, at times, leads the Bayern press. He pushes on from a deeper position to close down the ball-playing midfielder pulling the strings for the opposition’s midfield. However, Martinez isn’t the quickest. He also leaves spaces in the midfield to exploit.

As mentioned in the first leg preview, it leaves Thiago Alcantara with a lot of defensive work to do. If the likes of Mane, Firmino and one of the midfielders occupy spaces in that area of the pitch then Bayern could well find themselves in trouble if Liverpool nail just one counter-press situation.

One of the most feared strikers in Europe, Lewandowski is currently the top scorer in the Champions League this season with eight goals. He’s averaging 1.15 goals on a per 90-minute basis in Europe. Domestically, the Bayern No.9 has 17 goals in the Bundesliga at a rate of 0.71 per-90.

He heads into the game in fine form having netted four goals in his last two outings. In the Champions League, the 30-year-old is, on average, getting 64 per cent of his shots on target. Essentially, every two of his three shots are hitting the target. 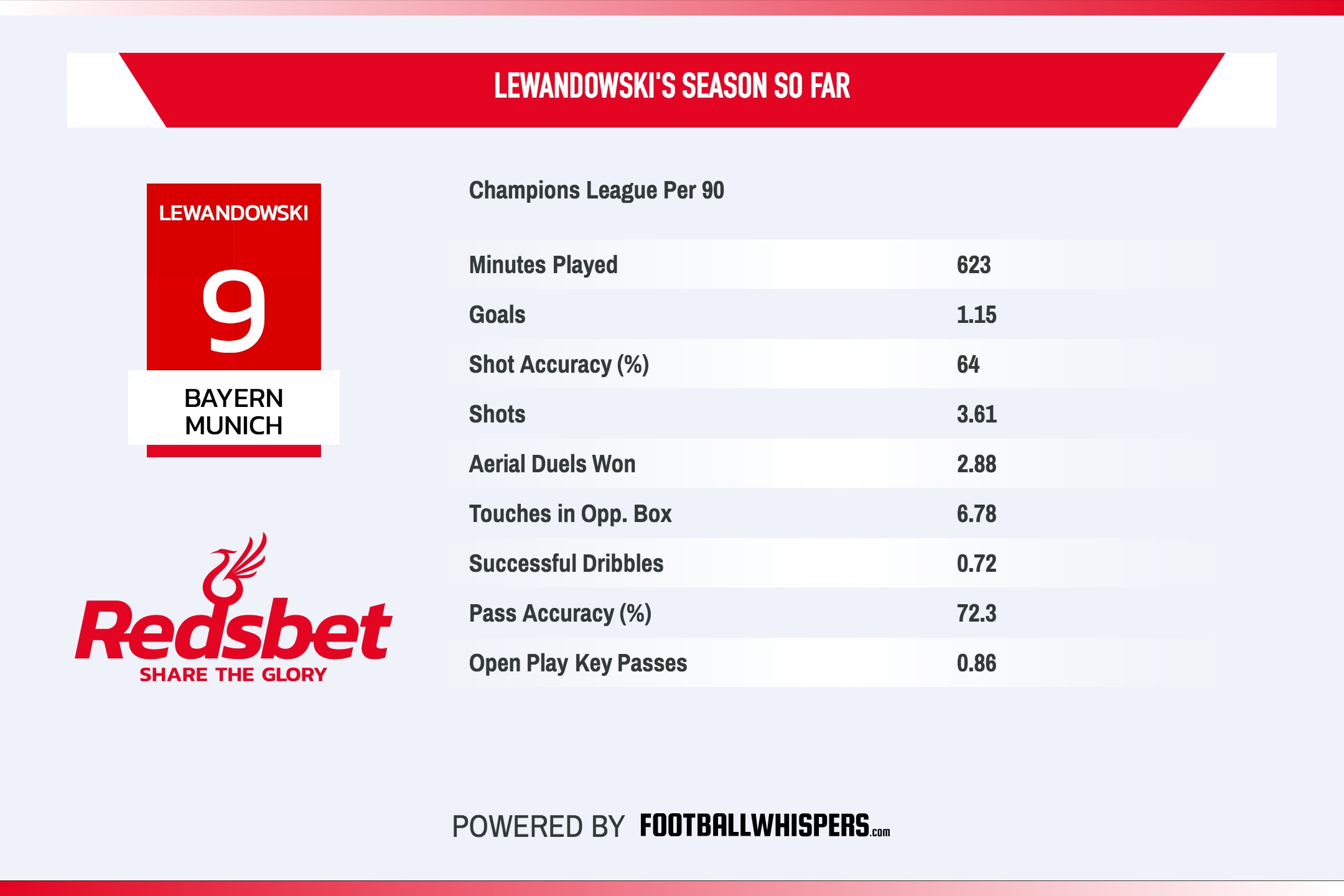 Liverpool need to ensure they disrupt his supply line if they’re to nullify the Bayern attack. Andrew Robertson will need to be quick to block Joshua Kimmich’s crosses. Fabinho or Henderson will have to keep tabs on James Rodriguez and Trent Alexander-Arnold will have to do his best to make sure Serge Gnabry or Franck Ribery can’t cut onto their stronger foot.

Don’t be afraid to switch up the attack

Bayern will no doubt have a plan to face Liverpool’s front three. With Mane on the left, Salah on the right and Firmino centrally, it’s rare that Klopp moves away from this dynamic. But against Watford, when Firmino the Brazilian third of the trio was ruled out, the German tactician moved Mane into a No.9 role and it worked.

Why not try something similar against the Germans? Firmino’s work rate on the left would help shackle Kimmich while Mane’s pace would trouble any of Niklas Sule, Jerome Boateng or Mats Hummels. In fact, Salah and Mane could double up on the right.

By concentrating the sheer pace of the Liverpool forward line to one side, it gives the hosts something they won’t have encountered before.

All our Bayern Munich vs Liverpool markets