2018 WORLD CUP TEAM OF THE TOURNAMENT

When it was announced way back in 2010 that Russia would host the 21st edition of the World Cup, few would have expected the tournament to go on to be one of the most popular of all-time.

How wrong we all were.

Reservations about bestowing such a prominent global sporting event upon a nation with questionable footballing pedigree, a history of systemic doping violations, and major human rights deficiencies are still perfectly valid. But it is fair to say that the fantastic quality of football and the frankly incredible frequency of drama have rendered this tournament the greatest World Cup in living memory for millions of fans across the planet.

Alas, now it’s almost over. So before France take on Croatia in the final this Sunday, it feels like high-time to take it all in, and look back at some of the players who have impressed most throughout the competition. France to win and both teams to score is 15/4.

Here you have it, then, the official team of the tournament for the 2018 FIFA World Cup Russia™. Ok, it’s not the official one, but it is most definitely the correct one.

And yes, we are playing a 3-4-3 with a diamond midfield, because this tournament has been absolutely berserk, so the line-up should be too.

Kylian Mbappe to score at anytime against Croatia is 2/1. 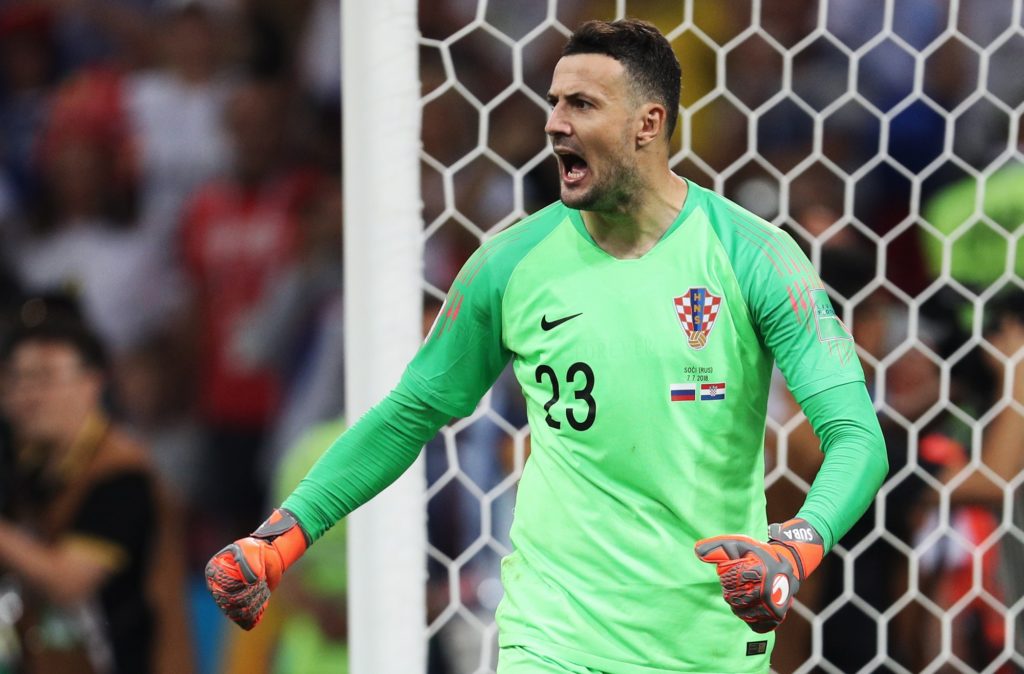 The AS Monaco stopper may have made an error to allow Denmark to take the lead in Croatia’s round-of-16 tie, but his exemplary reaction ever since has been one of the key catalysts for his team’s ascent to the final.

His four saves in two penalty shootouts against the Danes and the hosts put them through to the semi-finals, where his experience and composure took the sting out of England late on as he dominated the penalty area. 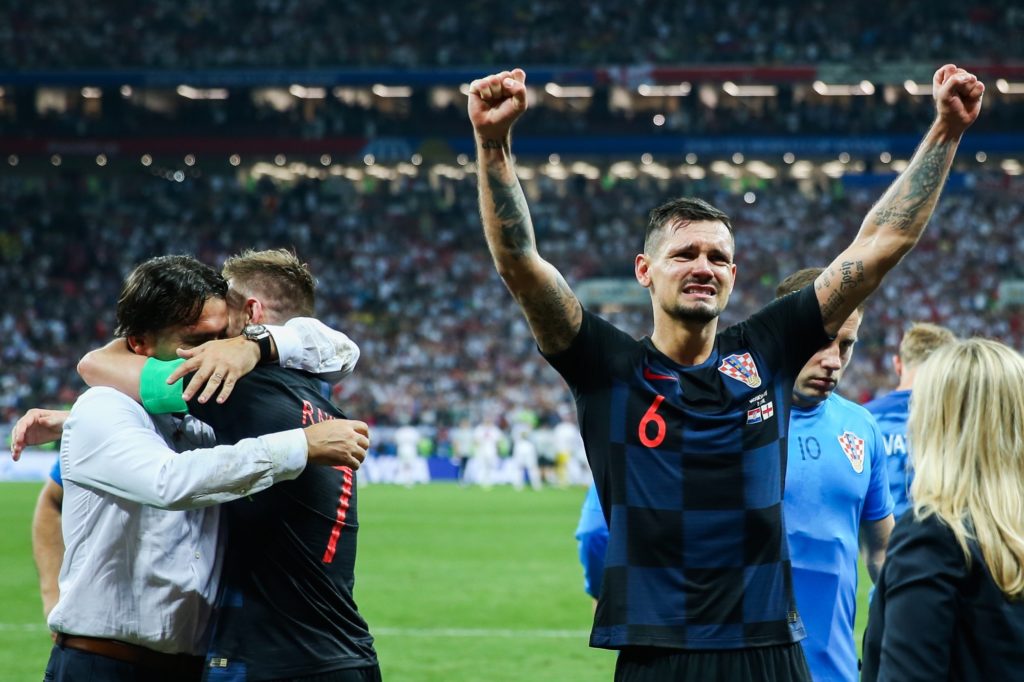 Lovren declared himself “one of the best defenders in the world” after knocking England out to reach the final, and while his comments may have served as a slightly tongue-in-cheek dig at the UK media and television pundits, on the evidence of this summer he’s not too far wrong.

The Liverpool man has followed up his man-of-the-match display for the Reds in the Champions League final with an impeccable series of performances in Russia, including helping to keep Lionel Messi quiet, and not allowing the English to regain a foothold in the match after half-time in the semi-final. 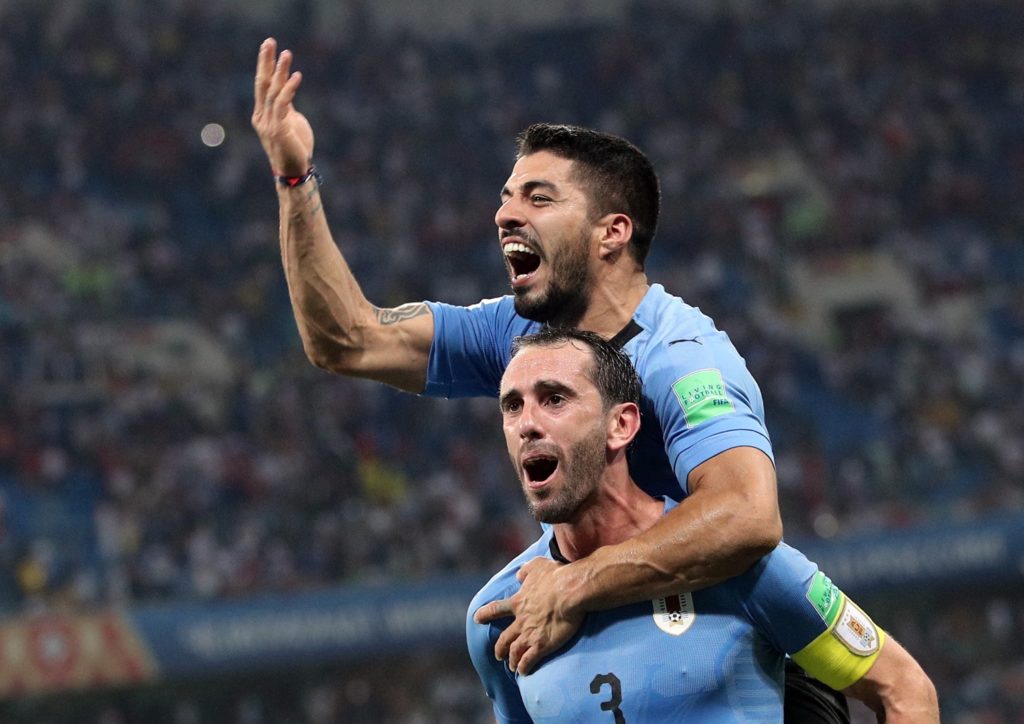 The Atletíco Madrid stalwart will still be kicking himself after skying a shot from just a couple of yards out as Uruguay were eliminated by France in the quarter-final, but from a defensive perspective, his five outings at the World Cup were practically perfect.

He combines his huge frame and heading ability with pristine positional sense and confidence on the ball, and the addition of club team-mate José Maria Gimenez alongside him at the back makes Oscár Tabarez’s men very difficult to break down.

Another Croatian slots into the backline, with the success of Zlatko Dalic’s team being primarily based on their aggression and refusal to allow the opposition time and space in the attacking third. Vida scored the header against Russia in extra-time which looked to have secured progression before Mario Fernandes’ late equaliser, and further enraged the hosts by being recorded on video making political statements in which he declared his solidarity with Ukraine, where he used to play for Dynamo Kyiv.

Gains extra points for creating a diplomatic incident, and also for looking like one of Hans Grüber’s henchmen in Die Hard. 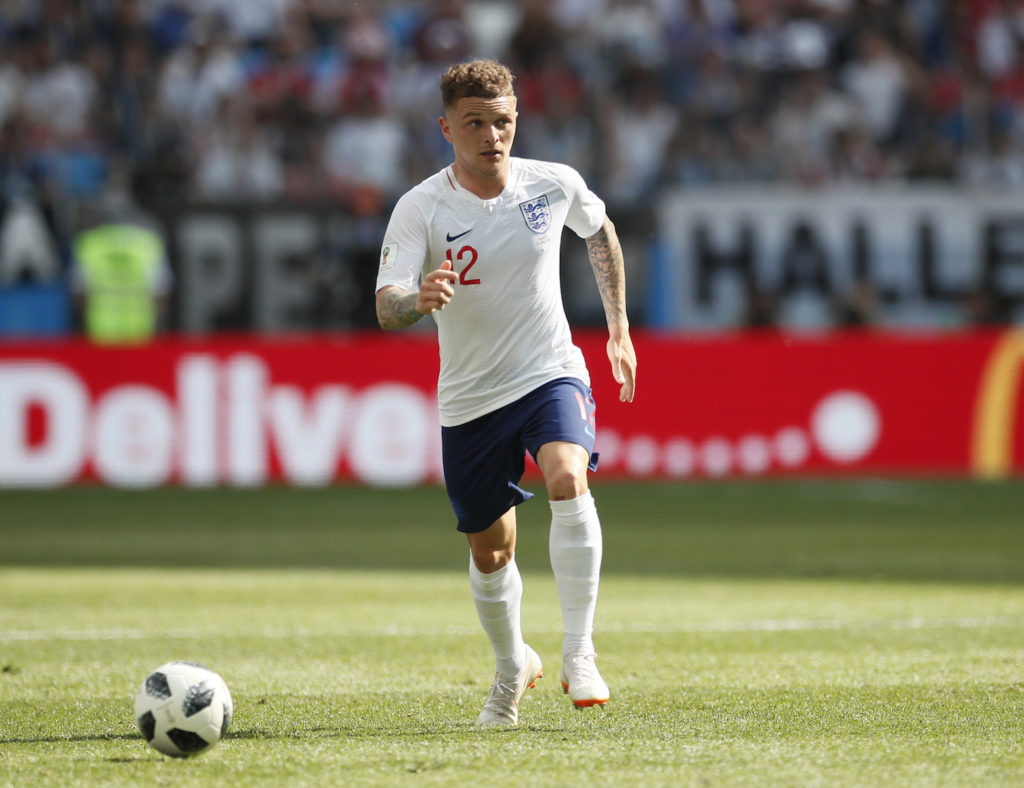 The tear-strewn Tottenham man was inconsolable after being forced off during extra-time of England’s semi-final defeat in Moscow, but in the days and weeks to come Trippier can look back on his performances with immense pride.

Just a year ago he was second-choice full-back at his club side before Kyle Walker’s move to Manchester City, and he’s now gone on to score a sumptuous free-kick in his country’s biggest international match for almost three decades. His excellent set-piece delivery was one of the most dangerous weapons any team possessed across the tournament. 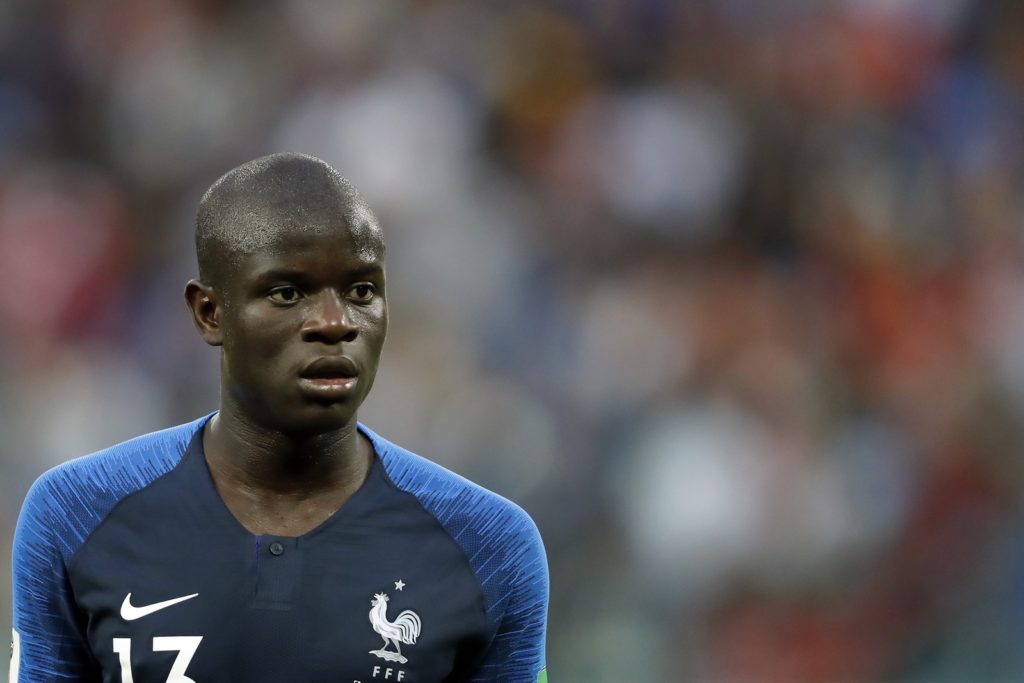 Ever since their staggeringly talented squad was announced a few weeks before the competition began, France have justifiably been many onlookers’ tournament favourites. But their journey to the final has been one built on efficiency, control, and physicality, as opposed to attacking excitement.

Chelsea’s N’Golo Kanté has been at the heart of Didier Deschamps’ game plan, and while there remain limitations to his game, his shuttling, strength, and quick short-passing provide a platform for the players around him to go and win football matches. In a French side full of superstars, Kanté serves as one of its most crucial components. 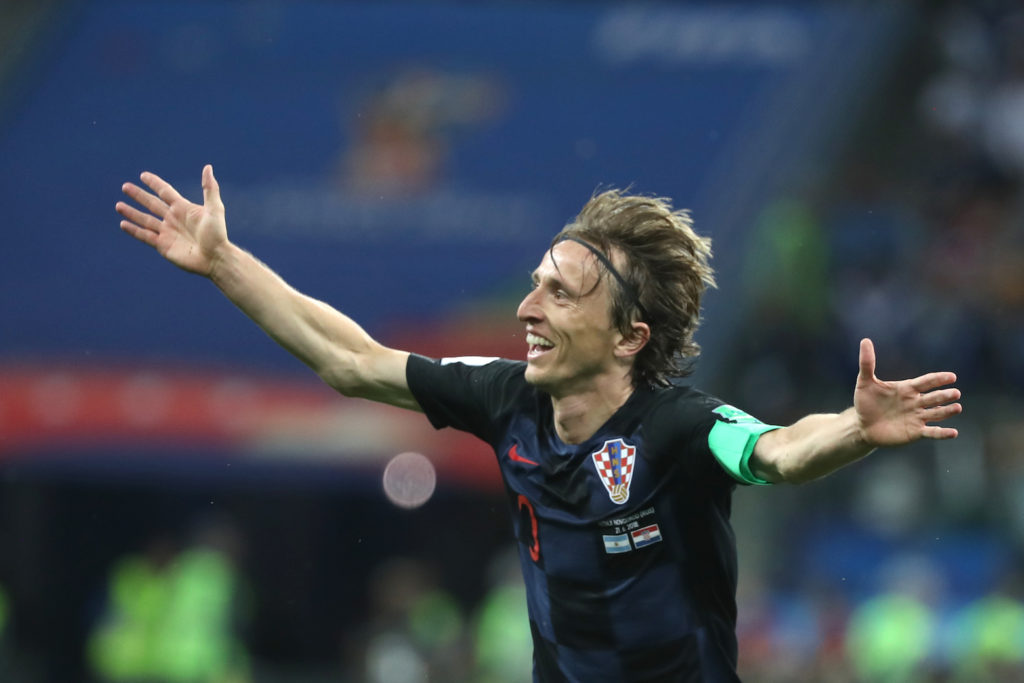 In the first-half of extra-time against England, with the match, at 1-1, Luka Modric lined up a cross from the right-hand side. Unmarked but severely exhausted, he stumbled into the ball, knocking it a few yards into the path of Danny Rose, who broke forward in possession.

Seconds later, the diminutive midfielder tore up the yards to catch Rose and slide tackle the ball back out of play.

Even at the best of times, Modric is not known for being a domineering physical presence on the football pitch, never mind 100 minutes into a match, after previously having to come through two penalty shootouts, and following a very long European season at club level with Real Madrid.

In that moment, Modric displayed the determination to win of man who knows he can be the focal point of his nation’s greatest ever sporting achievement. Throughout the tournament, in periods of battle like that against England, and in moments of stunning quality like his goal against Argentina, Modric has been doing his utmost to pull Croatia to the promised land, and to possibly earn himself a ballon d’or.

Yes, Hernandez has played as an orthodox left-back throughout this tournament, but if we’re going to make this formation work we’re going to need to allow a bit of creativity and push him forward. Don’t argue with the rules.

Hernandez probably wouldn’t have been selected as part of France’s first-team had Manchester City’s Benjamin Mendy arrived in Russia fully-fit, but the Atletíco Madrid man has certainly taken full advantage of the opportunity.

A series of steady displays on the left-hand side of France’s young defence belie his inexperience and suggest that he can make the position his own for potentially the next decade.

Kylian Mbappé didn’t quite ‘announce’ himself on the world stage during this World Cup, that was already done when Paris Saint-Germain paid almost £200m for his services a year ago, but he most definitely emphasised his status as the most likely heir to the role of global football icon currently held by Lionel Messi and Cristiano Ronaldo.

His form early in the tournament wasn’t particularly impressive, but then again neither were the performances of the French overall. He did, however, look like the only player on the pitch who wanted to win the match when France played out a goalless draw with Denmark that ensured both teams progressed to the knockout rounds, before his captivating performance against Argentina in which his speed, finishing technique and work ethic were clear for all to see.

Three goals and a string of standout displays mean he’s likely to win the Golden Ball for the tournament’s best player, and at just 19 years-old, he might well go on to pick up a few more of those accolades across the course of his career.

Honourable mentions: None. Nobody else in this position was much cop, to be honest. 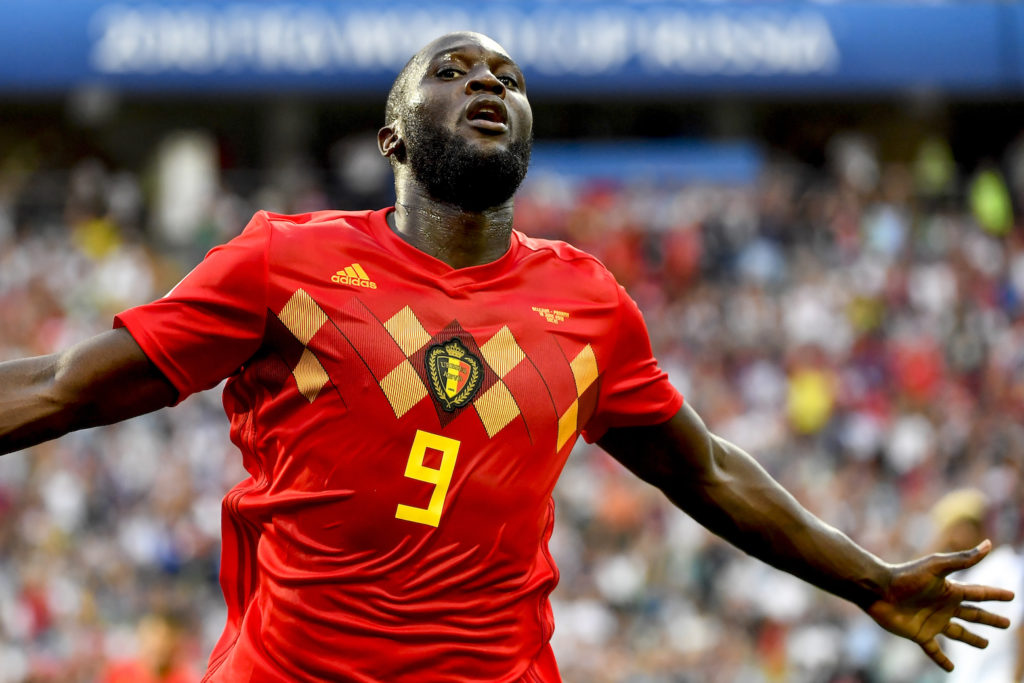 Belgium can count themselves extremely unfortunate not to have reached the final, having mounted a magnificent comeback against the Japanese to win the tie with the last kick of the game, before they comprehensively dismantled Tite’s much-fancied Brazil in the quarter-final.

Kevin de Bruyne and Eden Hazard were both impressive in the final-third for Roberto Martinez’s men, but Romelu Lukaku was the focal point for their best work and his four goals in the group stage gave his team immense confidence going into the latter stages. Against Brazil, his bulldozing run past Paulinho and Fernandinho started the move which led to De Bruyne’s winner, thus ensuring arguably the greatest result in Belgium’s history. 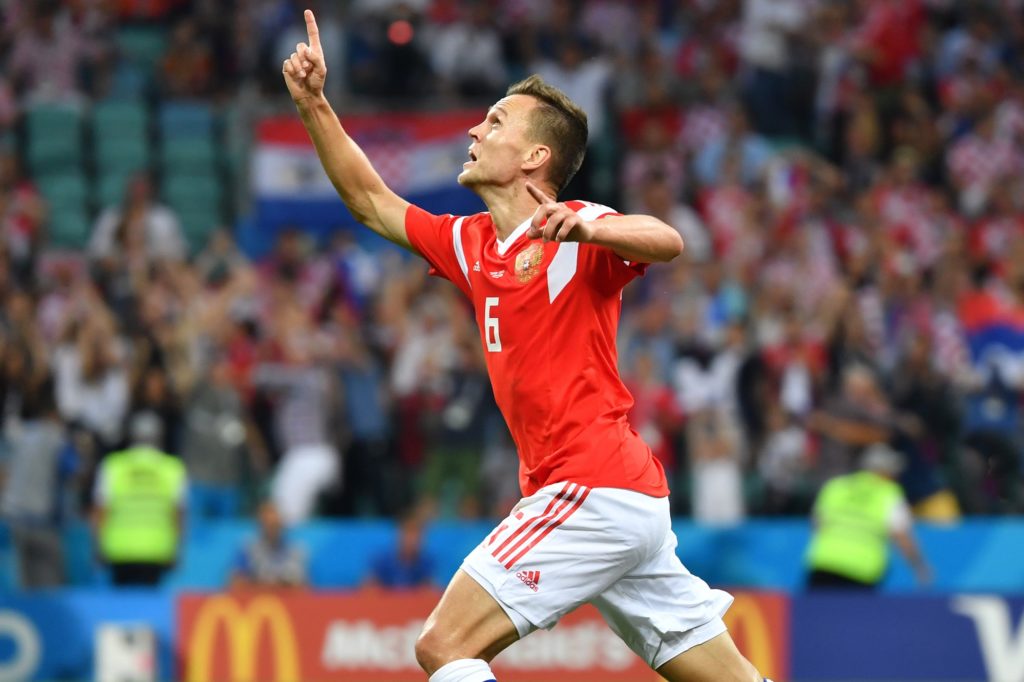 Cheryshev provided the springboard for Russia’s unexpected run to the last eight with a hat-trick against Saudi Arabia and became the poster-boy for an enthralled host nation which had very few expectations going in to the World Cup.

His old-school, sideline-hugging wing play provided a different kind of challenge to opposition defences, and his third goal in that opening match, a superb curling volley without the outside of his boot, as well as his stunning long-range effort against Croatia, were two of the best goals scored across the entire tournament.

Four goals for a wide-player who started as a substitute for the competition’s lowest-ranked side is not too shabby at all. 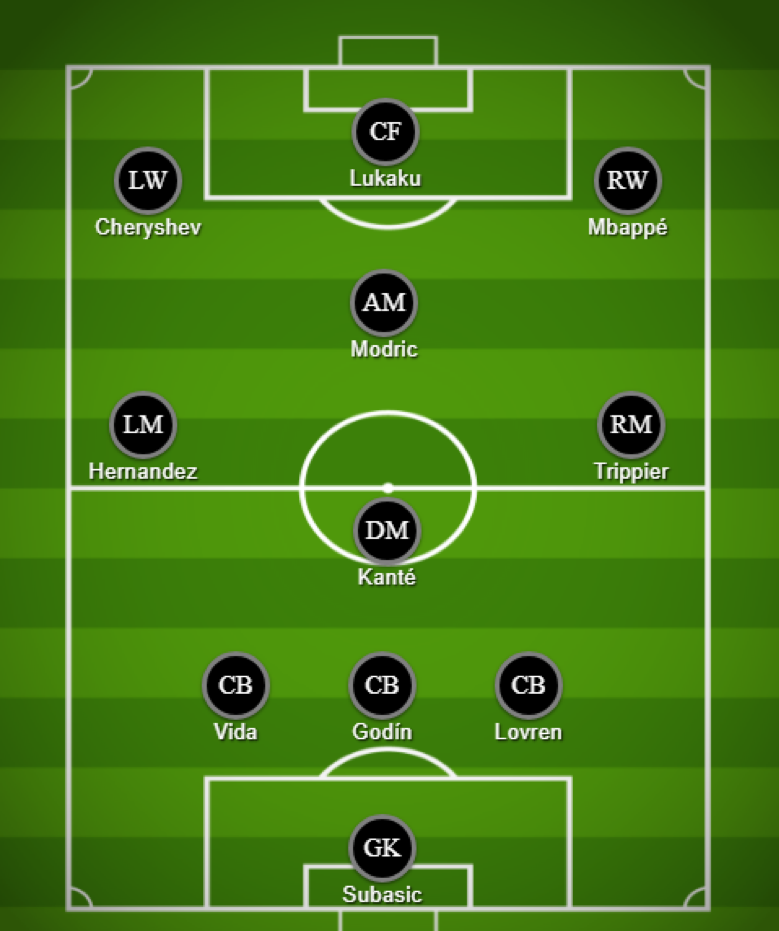